Local retired butcher and former 4-H member Fred Scheffelmaier at the Kootenai County Fair in the mid-50s with a prize hog.

COEUR d’ALENE — Looking at their humble beginnings near Fort Sherman at the old Kootenai County Fairgrounds in 1922, the local 4-H chapter has come a long way since.

The staff and volunteers of Kootenai/Shoshone 4-H are planning on celebrating that progress with the community at 6 p.m. on Saturday with a 100-year Anniversary Celebration at the current Kootenai County Fairgrounds, 4056 N. Government Way.

“It’s totally open to the public, so if anybody has extra family they want to invite or just want to come and see what 4-H is, we will have those resources there,” she said.

With youth membership at around 750 and 300 adult volunteers, Kootenai/Shoshone 4-H is the largest 4-H group in the state, even compared to more populated areas. Strong membership is owed to 4-H being seen by many involved as more of a tradition and less "just a club," Balderrama said.

“We have families that are actively enrolled in 4-H that have probably hit fourth or fifth generations in an ag-based youth program right here in our county,” she said. “It’s a long history, which is pretty exciting.”

Projects that Kootenai/Shoshone 4-H offers its youth members have grown exponentially since its inception 100 years ago. While they still have traditional projects with farm animals, they've expanded into more STEM (science, technology, engineering and mathematics) projects as well. With over 100 different projects available, Balderrama, a North Idaho native who has been involved with 4-H her entire life, believes there's something for everyone.

“4-H is so much more than cows and cookies. We have just about anything under the sun that you can think of,” she said.

Balderrama said 4-H got its start in Idaho in 1902 when land grant universities, such as the University of Idaho, would share new research and technologies with farmers to improve their yields.

“But the adults were too busy out in the field actually doing the work to learn the new stuff, so they went to the next audience, which were the youths," she said. "They started teaching them how to do all this new, innovative stuff. Then they would take it back home and tell Dad!”

Part of the fun for youth members is showing off their hard work at the local county fair. With The Kootenai County Fairgrounds also planning to kick off its 100-year anniversary this year, the timing for the local 4-H couldn't be better.

4-H and county fairs are almost synonymous with each other, as the fair has always been a natural time and place for farmers to show off the best of their harvests.

“We still do the same thing today, so even if you’re doing a LEGO robotics project, you can take it all the way to the fair and show it off,” Balderrama said.

The 100-year Kootenai/Shoshone 4-H celebration will start at 6 p.m. with a barn dance theme and a $5 spaghetti feed. Dance lessons will start at 5 p.m. for anyone who needs them. 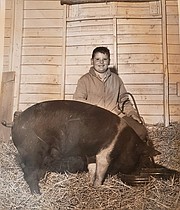 Local retired butcher and former 4-H member Fred Scheffelmaier at the Kootenai County Fair in the mid-50s with a prize hog. 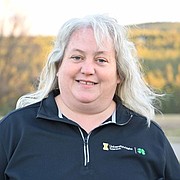