HUCKLEBERRIES: Jesus and the Packers

Ben and Bonnie Fairfield and sons Noah, Jacob, and Matthew

Gary Norton at Henley Aerodrome in 1987.

First, you should know that Ben Fairfield loves the Green Bay Packers.

And that he has passed his love for The Pack along to his three sons -- Noah, Jacob, and Matthew.

The RE/MAX veep from Coeur d’Alene received many gifts to celebrate his 40th birthday on Thursday, Aug. 4. But nothing prepared him for the lollapolooza from friend Jeff Reyes of Manteca, Calif. – a personalized birthday video from legendary Packers QB Brett Favre.

“I’ve been a Green Bay fan since I was little,” Ben told Huckleberries. “I have admired Brett Favre as an athlete and a man. He’s clean cut, a good leader, and a good guy.”

Favre is among the cast of celebrities who cut customized videos for a price on the Cameo.com site. Prices vary with star power. A personalized video from boxer Mike Tyson costs $670, from “Jeopardy!” champ Amy Schneider, $200. Favre was $400+ and a bargain at that.

Favre didn’t give a scripted spiel of 30 to 40 seconds as some Cameo regulars might do, Ben said. He was conversational and spoke for 3 ½ minutes, mentioning by name Ben’s three sons and wife, Bonnie. And expressing a desire to escape sweltering Mississippi in August to spend a month in beautiful Idaho.

Also, Favre said that age 40ish is wonderful, mentally and physically, a time during which you “feel 10 feet tall and bulletproof.” But, he added, “the next thing you wake up and you’re 52. And every sack that you’ve had throughout history is knocking at the door.”

The famous signal caller closed by saying he and Ben shared a love of Jesus and the Packers.

Wife Bonnie was impressed, too, but also challenged by friend Jeff’s GOAT gift. After the presents were opened, including hers, she texted Ben’s friend and joked sarcastically: “Thanks a lot.”

Wait till next year.

Few hands went up when spokesman Garrin Hertel of the Spokane jazz band Zonky asked audience members at McIntire Park in Hayden recently if they had heard of Mildred Bailey. This, after the band had played several Bailey tunes. The response wasn’t surprising. Bailey has been described as “the best jazz singer of the swing era that you’ve probably never heard of.”

Why should we care about her? She was raised on the Coeur d’Alene Indian Reservation and Spokane.

Mildred Bailey was born on Feb. 6, 1900, in Tekoa, Wash. Her mother, Josephine, a talented pianist, was a member of the Coeur d’Alene Tribe. Bailey credited the Native American songs of her youth with shaping her voice. Her brother, Al Rinker, was good friends with crooner Bing Crosby.

In her prime, Bailey was an equal to Billie Holliday and Ella Fitzgerald and sang lead vocals on three No. 1 hits, including “Darn That Dream” with Benny Goodman and his Orchestra. She and Fitzgerald both recorded “A-Tisket, A-Tasket.” In 1989, she was inducted into the Big Band and Jazz Hall of Fame.

Don’t despair if you missed the Handshake Productions concert at Hayden city park. Zonky is recording a collection of 15 songs by the jazz great, titled “Home: A Swing Tribute to Mildred Bailey.” You can learn more about the project and Bailey at this site: zonkyjazzband.com.

Anne Lunceford Capellen was wearing her POW bracelet when she met her hero at the recent reunions for the Coeur d’Alene High classes of 50 years and beyond – Fred McMurray. Both were talking to Sandy Emerson at the time. Soon, it became obvious to Anne that she was in the presence of THAT Fred McMurray, the local warrior who was shot down on Sept. 12, 1972, near Haiphong, North Vietnam. Anne hugged Fred and introduced herself. On her wrist was the same bracelet she wore in 1972 and 1973 in honor of Fred when he went missing. “In one way, I was awestruck to be in the presence of my hero,” Anne told Huckleberries. “But in other ways it was as if I’d known him for a lifetime.” Sandy Emerson would later introduce Fred to a standing ovation from the gathering. Meanwhile, Fred gave Anne a copy of his memoirs. As tired as she was from chairing the Class of 1972 reunion, Anne began reading. “Every word,” she said, is like the stroke of a paintbrush as he tells his story. Incredible!”

· Poet’s Corner: Abracadabra/some pixie dust too,/and money appears/straight out of the blue – The Bard of Sherman Avenue (“The Magicians’ Club of Washington, D.C.”)

· If you wonder how to describe a “split second,” Dave Wagner of CDA has the answer. It’s that instant that occurs to the first driver in line at a stoplight when the light turns green. A split second is the time it takes to check for red-light runners and the guy behind you to honk.

· Gary and Stacey Norton didn’t know exactly what they had in August 1987 as they poured $2 million into the old Henley Aerodrome near Athol. Here’s how the Press described their dream: “Take a dash of Disneyland and a dab of Knott’s Berry Farm. (And) blend it with one couple’s love of airplanes.” The project would soon be called Silverwood. “If nobody shows,” Gary Norton said, “then I’m just going to have a nice little park to play in with my friends.”

· On this day in 2002, EPA administrator Christie Todd Whitman, Idaho governor Dirk Kempthorne and other dignitaries were pictured in the Press toasting a Coeur d’Alene Basin pact with glasses of Lake Coeur d’Alene water. Then, they drank. Whitman had announced the welcome news that the lake wouldn’t be declared a Superfund site. And she had deemed lake water good for boating, drinking, swimming, and fishing. And never mind those Day-Glo fish.

· Signs of the Times (at Hurd Mercantile in Rockford, Wash.): “You know you’re getting old when ‘friends with benefits’ means someone who can drive at night.”

You May Be a Coeur d’Alene Old-timer – if you danced to the tunes of “The Shadows” during the 1960s or even at their reunion gigs in the 1980s and beyond. But you’re truly a Lake City old-time if you danced to the Jive Five: Jerry Van Valkinburg, Ed Frandsen, Ed Anderson, Bill Hultman, and Ralph Lindberg. Lindberg was leader of the band, which was popular 75 years ago (August 1947) at the Athletic Round Table, Coeur d'Alene Roller Rink, and school dances. Jive Five even made a “jamming” tour to Lewiston, Asotin, and Colfax. “So popular has the fivesome become,” said the Press, “that they are now attempting to arrange their schooling so that all five may attend the same college and keep the band together.” The band’s signature song was “B-flat Blues and Boogie.” Elvis and his swiveling pelvis were still nine years away from causing an Ed Sullivan audience to become “All Shook Up.” 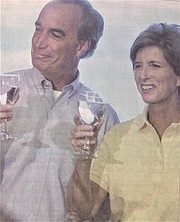 Gary Norton at Henley Aerodrome in 1987. 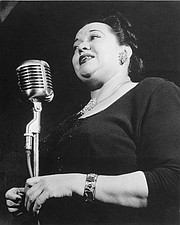