The Kroc/CDA girls 18U water polo team took third place in the Gold Division at the 2022 National Junior Olympics in Dallas on July 27-31.

Over 190 teams played in the various age group divisions, including 24 teams in the women’s 18U division. The Kroc/CDA team played a number of teams, including clubs from Florida, Texas, Illinois and New Mexico. The Kroc/CDA squad won 5 of their 9 games, including a strong 14-7 finish in their third-place game against the Miami Raiders.

Joslyn Dimitri led the scoring for the Coeur d’Alene team while taking primary hole responsibilities for the tournament. Joslyn was often dominant in the hole, forcing other clubs to double-team her or drop other players to cover her. Emma Fritz also played significant time in the hole position, giving Dimitri a break when needed. Simone Gonzalez also helped out in the hole when Dimitri and Fritz had to leave the game due to getting three exclusion calls in one of the games. Gonzalez also scored a number of goals from the driver position.

Amy Fritz did an excellent job as the primary hole defender, making passes to the hole set difficult throughout the tournament. Fritz also had one of the more exciting goals of the tournament. At the end of the second quarter of the Texas Mavericks game, the Mavericks goalie brought the ball past half while the rest of the team split to the sides of the pool. The goalie shot the ball with 5 seconds left in the quarter but the ball fell short. Fritz quickly recovered the ball and immediately threw a 3/4-pool-length shot toward the opposing goal as time ran out. The throw was slightly short and the ball landed in the water about a yard short of the goal line. However, the ball continued to slowly roll forward and, in a scene reminiscent of the last golf shot in Caddyshack, the referees, players from both teams, and the audience all watched in silence to see whether the ball had enough momentum to drift into the goal. After about 10 seconds, the ball crossed the line and the referee signaled a goal as the audience erupted in cheers.

Another key player for the Kroc team was Gianna Gonzalez who was a leading scorer. Gianna had sprained her ankle early in the tournament and had difficulty kicking during the games but was still a key contributor with multiple goals in every match, including drives, top shots and inside shots from the wing.

Alena Gonzalez took primary goalie responsibility and made scoring difficult for the other teams, blocking everything within her range and delivering the ball quickly on CDA counter-attacks. Abbey Higgins played well as a backup goalie in a number of games, allowing Gonzalez to also play field.

Abbey Higgins, Maren Hover and Ryenne Ayers also had excellent contributions from the field, with a number of goals, steals and assists throughout the tournament. All three scored several goals from the top of the offense as well as on drives to the goal.

Lindsay Dimitri and Libby Montgomery gave the team a lift off the bench, and were able to cover for several of the starting players when they had to leave the game due to obtaining three exclusion fouls.

This was the first time the Kroc/CDA team had participated in the National Junior Olympics so their third-place finish in the gold division was unexpected. Based on their experience and results this year, they are already looking forward to next year’s Junior Olympic event. 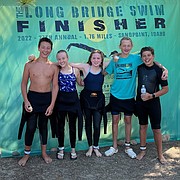