In 1987, Sandy Emerson outside chamber office.

A GUBERIF on a garbage bag.

I first met Sandy Emerson in fall 1984, when he managed the Coeur d'Alene Chamber of Commerce from a small building on what is now the northeast corner of The Coeur d'Alene Resort's front lawn.

I was fresh off the U-Haul truck from Lewiston, where I had been news editor of the Morning Tribune. I'd swapped that hat to return to reporting. At The Spokesman-Review CDA bureau, I was assigned to cover local government (City Hall and the county courthouse).

I dropped by Sandy’s office to get a feel for the town and my new beat.

I don't recall much about that visit, other than Sandy was smoking a pipe with sweet-smelling tobacco and viewed me as another in a string of reporters from the "out-of-state newspaper" -- a common put-down of the SR by The Press and allied local leaders during the "Great North Idaho Newspaper War” (1980s-90s).

Cooper and I made Sandy and our classmates nervous because we worked for fierce rivals -- anxious enough to institute the "Media Rule." The directive said that information shared during a class couldn't be used in our respective newspapers. I gave Sandy heart burn by saying I might publish something from the monthly classes if it was juicy enough to risk getting booted from Leadership Coeur d'Alene. I was joking. But Sandy didn’t know that.

Leadership Coeur d'Alene is the only organization I've joined in my 38 years here. I'm not a joiner. I'm an observer and a reporter who subscribes to Groucho Marx's philosophy, "I don’t want to belong to any club that will accept me as a member."

The title of the editorial was spot on: “Emerson: Big shoes to fill.”

For decades, life here from mid-July through August could be summed up by the 1958 Platters song, “Smoke Gets in Your Eyes.” And lungs. And under your skin.

Even before he bought the old North Shore Resort and went all in on tourism, Duane Hagadone campaigned in his Press against field burning on the Rathdrum Prairie.

On Aug. 3, 1982, a Press editorial said: “For years, the citizens of this county have been listening to the grass growers lamely explain why they have to annually burn their stubble-covered fields and thus darken our summer skies with thick, choking smoke for weeks on end.”

The war of words would reignite every summer with the fields.

So it was a relief to many on Aug. 1, 1997, when Don Jacklin of Jacklin Seed Co. announced that nine of 16 local grass growers had agreed to voluntarily phase out field burning over 10 years. “The message from the community is clear,” Jacklin said at a press conference. “We must stop open-field burning and we will.”

While The Press applauded the actions of the majority, grass burners in the minority thumbed their noses, including former state legislator Wayne Meyer. The older farmers viewed the concession by Jacklin and others as a ruse to develop the Rathdrum Prairie.

A few warned at the time that the prairie would sprout subdivisions once the pastoral grass fields were gone. And, for better or worse, it has.

Ziggy Steele and wife, Harry (Harriet), former residents on vacation at Farragut from Hawaii, remember Idaho’s old anti-wildfire campaign: “DON’T BE A GUBERIF.” You learned in last week’s Huckleberries that “GUBERIF” is “Firebug” spelled backward. Now, onward. Ziggy emails: “My wife Harry (Harriet), worked for Idaho Department of Lands from 2007-2013 as wildfire prevention educator. Among her many duties was the Firewise program. So, she decided to resurrect the GUBERIF. She had trash bags and posters made up with the GUBERIF logo on them. She also went the extra mile and traveled throughout the Panhandle painting “DON’T BE A GUBERIF” on selected roads. When you happen upon one of those paint jobs, that’s Harry’s handiwork.”

· Poet’s Corner (Oldie but Goodie in wake of the drone strike that killed al-Qaeda leader Ayman al-Zawahiri): He lived by the sword and/earned what he got --/Osama Bin Laden/bin very much shot – The Bard of Sherman Avenue (“Bin a Long Wait”).

· Bumpersnickers: Gina Emde Mote, who left here for Arizona five years ago, reports a mixed message on a white Subaru: First, she spied three nice sayings on the vehicle, starting with (back window): “I hope something good happens to you today.” Then (license holder): Kindness Warms Hearts.” And (vanity plate): “LUV ALL.” The mixed message? A splat of bird poop dotted the “I” above the first message. Such is life..

· Sharon Gwyn of CDA needs a sticker like the one spotted on Ninth Street this week: “This bumpersticker is just covering a dent.” Sharon accidentally backed her newish car into a truck at the Demolition Derby we know as the Costco parking lot. The fender bender left a scuff and a ding on her bumper. Before she said, “Dang!” or “Drat!” Sharon could almost hear her late mother’s voice consoling, “It will buff out.”

· Coeur d’Alene’s urban renewal agency was created 25 years ago (Aug. 6, 1997) on a 3-2 vote of the City Council, with Mayor Al Hassell casting the tiebreaker. Ron Edinger and Susan Servick voted yes, Dixie Reid and Chris Copstead no. Two council members were absent. Who knows? P’haps the productive URA has made this place too attractive?

· Please join Huckleberries in lifting a glass to Marion Finucane (Fa-NEW-can) who, in August 1987, gave Hayden 10 acres of pasture at Fourth and Prairie. The gift, in honor of Marion’s late husband, Charles, a former undersecretary of Defense in the Eisenhower administration, has been transformed into one of the area’s busiest youth sports venues.

Like parakeets in a mine, two Idaho congressmen warned us of danger. But, 40 years ago, we were blinded by the national spotlight shined by U.S. News & World Report. In its July 13, 1982, issue, the mag listed Coeur d’Alene among its 10 most livable places in the USA, describing our place as an “outdoor paradise.” But U.S. senator Steve Symms told The Press: “Let’s hope the news doesn’t spread too fast, causing a sudden influx that could spoil (Coeur d’Alene’s unique environment).” Representative Larry Craig said the article put North Idaho in a Catch-22 situation. The region needs the jobs created by new businesses and industries, he said, but a population increase could “lessen the state as we’ve known it.” See barn. See horse leaving. 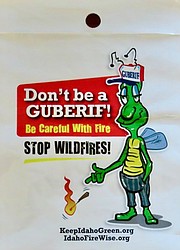 A GUBERIF on a garbage bag. 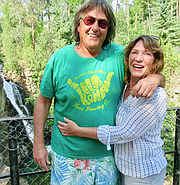