The big tent is now open

COEUR d’ALENE — Dozens of local Republicans gathered Wednesday to unveil a group for Republicans who don’t feel represented by the Kootenai County GOP.

North Idaho Republicans describes itself as a local movement with traditional Republican values, “like those embraced by Ronald Reagan and Abraham Lincoln.”

“It’s time,” she said during a press conference Wednesday in the Coeur d'Alene Public Library.

The local Republican Party has transformed over the last decade, Patano said, becoming almost unrecognizable to many longtime Republicans.

She described a “takeover” of the Kootenai County Republican Central Committee by people who were not affiliated with the party.

“They were Libertarians,” she said. “They were members of the Constitutionalist Party. They were John Birchers. They were Redoubters.”

North Idaho Republicans believe in the “big tent” that Ronald Reagan spoke of, Patano said — the notion that there is room in the Republican Party for diverging views, unified by basic philosophy.

Former Idaho Lieutenant Gov. Jack Riggs said the KCRCC’s politics and insular practices have alienated many of the traditional Republicans who he believes make up the majority in Kootenai County.

He pointed out the frequent practice of labeling Republicans “RINOs,” or Republicans In Name Only, if they don’t align with the KCRCC.

“Many of the people doing the name calling are not Republicans,” said Riggs, who is also a former state senator. “This abandonment of the organized party in this county has led to where we are.”

Riggs said North Idaho Republicans is looking to the future of Kootenai County, beyond the May 17 primary election.

“We need this to be a long-term home for Republicans,” he said.

The group is comprised of around 100 founding members, including numerous former state legislators, sheriffs, mayors, county commissioners and other community leaders.

Patano said the KCRCC has drifted away from the traditional Republican values of supporting democracy, economic prosperity, families and education.

She noted the KCRCC came out against three supplemental levies put forth by the Coeur d’Alene, Post Falls and Lakeland school districts last year.

“We saw blanket opposition to every single school bond or levy in Kootenai County, something we had never seen,” Patano said. “(The KCRCC) wanted everyone to know of their opposition to our public schools.”

Patano said the KCRCC engages in “politics of obedience,” pointing to the group’s vetting process as an example.

The KCRCC recommends candidates in area elections, its version of an endorsement.

The committee’s website outlines a lengthy candidate rating and vetting process, which involves questionnaires, interviews, forums, subcommittee reports, discussion and debate, and a vote by the full membership.

The KCRCC says the process is designed to be “open and transparent,” with the final ballots kept secret, so no committee member feels pressured to vote a certain way.

Patano said she believes the results are predetermined, contending the KCRCC recruits the candidates who are ultimately endorsed.

“They aren’t going to endorse people who don’t follow their script,” she said. “When you get the official KCRCC sample ballot … you will find people who are beholden to them.”

As the speakers ended their remarks, a man in the audience stepped in front of them, holding a sign that said “Fake Republicans.”

He initially refused to return to the audience.

Riggs said that kind of disrespectful and disruptive behavior, which has become the norm in local politics, is part of why North Idaho Republicans came together.

“We’re not here to do what this gentleman is doing,” he told the crowd. “We’re here to represent what we believe are tens of thousands of Republicans who are good Republicans. We’re going to give them a home where they can be happy to be Republicans and not ashamed.” 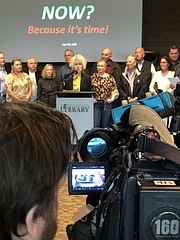