Hoisting a lance to lessen litter

Every morning, Richard White hoists his lance and rides Rocinante into the countryside to battle the Garbage Dump Troll who defiles our byways by night.

Like Don Quixote of old, the Coeur d’Alene man views his patch of the world as a kingdom that must be protected against the ever-present threat of debris.

For three hours and six miles a day, year-round, Richard rides his bike, equipped with a 32-gallon garbage can, from his Indian Meadows area home. First, he picks up trash in his neighborhood with a garbage grabber, then heads to Seltice Way, Ramsey Road, the transfer station, Winco and along I-90.

The mythical kingdom Richard, 67, has created in his mind is a coping mechanism.

In September 2015, Richard was driving a lowboy truck near Bonners Ferry when he felt a hot sensation in his skull. Then, blue flashes. Afterward, he was dizzy all the time. He couldn’t see well. He could barely walk. He was suffering something called persistent postural perceptual dizziness.

He was done working and driving. But he still could ride a bike.

Six months later, after discarding self-help books, he looked to the “Man of La Mancha” for inspiration. His bike became Rocinante. His litter grabber transformed into his lance. And wife Candace was his beloved Dulcinea.

The imaginary kingdom, Richard told Huckleberries, “Allows me to deal with my different problems.”

It also makes a difference in this community.

In the last six-plus years, according to his meticulous journaling, Richard has picked up 2,403 garbage cans of trash (about 450 pieces per can) and 78,945 aluminum cans. He carries a small shovel to bury roadkill deer, dogs, cats, owls and hawks. Happily, he doesn’t find as many heroin needles as he once did. And he appreciates the signs of support from motorists: honks, waves, an occasional burrito or Subway sandwich, and high-fives from those who stop to talk, including ISP troopers.

“It’s the greatest job in the world,” Richard said.

Richard believes there’s less trash on his roadways today than when he started. And he says that much of the rubbish consists of debris from construction trucks. Considering the high traffic volume on I-90, Richard contends, relatively few people toss trash from their vehicles.

Richard points out that other volunteers pick up trash, too.

“The cleaner we keep it the cleaner it will stay,” he said.

Words to live by.

In the How Time Flies Department, it has been 10 years since Mary Souza and the late Kathy Sims almost beat City Hall. On April 4, 2012, Souza and Sims launched a recall effort against Mayor Sandi Bloem and three council members: Mike Kennedy, the late Deanna Goodlander and Woody McEvers. The recall ringleaders were miffed that the council majority hadn’t genuflected to their demand for a public advisory vote on the proposed overhaul of McEuen Field. Within days, Sara Meyer and Jennifer Drake organized opposition to the recall effort. Ultimately, in mid-June, the recallers fell about 200 signatures short on each of their four petitions. A new and vastly improved McEuen Park would replace 5 acres of cracked parking lot on the waterfront as well as the tired ballfields and tennis courts. Today, it’s hard to find anyone who’ll admit that they were part of the effort to stop our magnificent greenspace.

• Poet’s Corner: The seasons turn and now once more/the grass grows green outside his door/and brings the question many fear:/will that old lawn mower start this year? — The Bard of Sherman Avenue (“The Mystery of Spring”).

• Twenty-five years ago, according to late Press columnist Bob Paulos, Coeur d’Alene was part of a “Jeopardy!” question. Huckleberries suspects the quiz game clue went something like this. “The Coeur d’Alene Church of the Nazarene is located in this state.” The answer: What is Idaho?

• When you’re awakened by a cop while passed out along Interstate 90, you should answer truthfully when s/he asks your name. According to the Kellogg Police Department’s Roll Call, the sot rousted along eastbound I-90 at Kellogg the other day gave his name as “Manly Bacon.” And now he will forever be known by the Kellogg PD by that alias, giving bacon a bad name.

• Darrell Kerby of Bonners Ferry hasn’t eaten a cookie on April Fool’s Day for 66 years. It all goes back to that April 1 when neighbor June Brockway handed out freshly baked cookies to Darrell and his neighborhood buddies. She used cotton balls for the filling. Darrell says he can still hear Mrs. Brockway’s belly laughs after the kids discovered they’d been fooled.

It’s hard to believe now but 40 years ago the city came close to approving a covered mall over Sherman Avenue that would extend from Second to Fifth streets. At a meeting on April 6, 1982, downtown businesses pressured the City Council to back the mall. They felt a glass-covered mall would revitalize downtown. The hearing attracted 140 people. Thirty-one addressed the council, favoring the concept 5-1. Resident Manny Scherr wisely cautioned against the idea, stating the mall would “amputate” three blocks of “our main street” and have a traumatic effect on access to the city’s lake. Fortunately, the newly elected council majority tabled the hare-brained idea for further discussion, with new mayor Jim Fromm casting the 4-3 tiebreaker. And that’s how close we came to spoiling paradise. 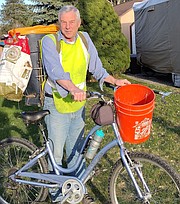