Halloween means costumes and themed STEM activities throughout each classroom at the elementary school in Coeur d'Alene.

“We just really tried to make it STEM-focused,” said Melody Lund, a second grade teacher. “All the teachers are doing amazing stuff.”

Lund said the school used to host a spooky STEM family night, but haven't in the past couple years because of COVID-19, so teachers worked to integrate Halloween into their STEM activities.

“Really, the whole STEM thing, it's just total teamwork,” Lund said. “We are really excited about getting the parents back in to help.”

With assistance from parent volunteers, each teacher created a STEM activity for the class that correlated to the current area of study.

For their STEM activity, Lund had the class create their own little house for a pig and then had them take turns bringing it to the “wolf” - a blower - to see if it would stay standing.

The class discussed how to create strong structures, and how hurricanes and other events can impact them.

“I’m trying to protect the pig with the wolf not blowing the house down,” said second-grader Hayden Hays in a fawn costume.

Hayden said she taped paper all around her house built with tissue paper rolls so the pig wouldn’t fly out when placed in front of the blower.

Second-grader Hattie Bozeman said she built a little house for her spider out of straws next to her pig’s house.

In fourth and fifth grade, teacher Julie Cooper had kids gutting pumpkins and estimating the number of seeds.

They also created catapults to launch mini toy pumpkins into the hollowed large ones.

Hunter Schwieters, a fourth grader, worked on creating a catapult for his team.

“It’s pretty complicated but it turns out being a lot of fun,” Hunter said.

Cooper said the class discussed how to design the catapult and make predictions of the distance it would launch, then test and modify the design if needed.

“If it doesn’t work I’m just going to destroy a little bit of it and try again,” Hunter said.

Cooper said she was impressed with the teamwork the kids had in organizing different roles within their groups.

“This is a great group of kids,” she said. “They really work well together.” 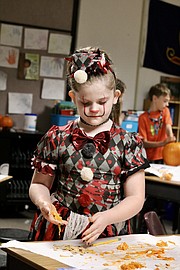 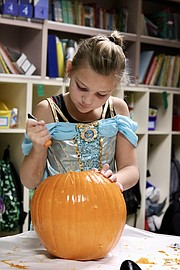 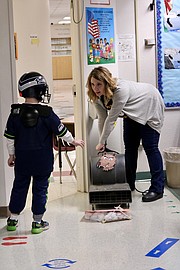