MARK NELKE/Press Rylee Hartwig (9) of Post Falls and Nellie Reese (5) of Lake City reach for a ball at the net during their first-round match at the state 5A volleyball tournament Friday at Coeur d'Alene High.

MARK NELKE/Press Emberlyn Reynolds (14) and Dorie Kiesbuy of Lake City put up a block against Riley Kaiser of Mountain View on Friday afternoon at the state 5A volleyball tournament at Coeur d'Alene High.

MARK NELKE/Press Claire Holding, left, and Sarah Rogne of Post Falls zero in on the pass during a match against Madison of Rexburg on Friday afternoon at the state 5A volleyball tournament at Coeur d'Alene High.

COEUR d'ALENE — The emotions shown by the Post Falls Trojans on Friday night, after a long day of volleyball, were part joy, part relief ...

Post Falls went 2-1 on the opening day of the state 5A volleyball tournament at Coeur d'Alene High's Viking Court. And with its 25-12, 25-23, 22-25, 25-22 victory over Thunder Ridge of Idaho Falls in its final match, the Trojans guaranteed themselves a trophy with a top-four finish.

"We've been playing so long together," Post Falls senior libero Claire Holding said, "and I'm so proud of us. We worked so hard and we pulled through and we fought to the end."

"It means a ton. It means a ton," Post Falls senior Emily Johnson said of the Trojans clinching a trophy. "We were tired (against Thunder Ridge), but we found it and we dug deep."

"Tough loss to Madison in the second round," Post Falls coach Willow Hanna said. "I thought we responded well to start the Thunder Ridge match. We played smart and with some grit to win."

The T-Wolves, who won a play-in game to advance to state. finished 18-8.

"We came out a little hesitant against Post Falls," said Lake City senior Hanah Stoddard, a Gonzaga commit. "But we played hard throughout the day. We took Mountain View, which was a big win for. Obviously we would have liked to play into tomorrow, but I'm pretty proud of my team today."

In the first match of the day, Post Falls and Lake City battled through the first two sets. Post Falls served its way to a big lead in the third set en route to the sweep.

“Our kids are just really excited to play today,” Hanna said. “I think we’ve had a lot of days of practice, and they were just ready. I think we had a really good week of preparation, and I think we’re seeing some of the results of that.”

Did it help to open against a team the Trojans already knew?

“That’s a good question,” Hanna said. “I think in our preparation, yes. Getting on the floor today, I don’t know the answer to that. It’s state; this is a big venue; something this group doesn’t have a ton of experience with. I don’t know; we just handled it very well.”

“I just think we came out a little stiff,” Kleinberg said. “A little stage fright, and just had a hard time getting going. We were just having a hard time communicating (during Post Falls’ serving run in the third set). It was really loud; we couldn’t hear each other.”

In the Madison match, Munday had 14 kills, 17 assists, six blocks, 20 digs and an ace for Post Falls. Byrne, a freshman, added 13 kills. Gardiner had 28 assists and an ace, Hartwig seven blocks, Holding 26 digs.

"Trinity had a really great day," Hanna said. "Proud of her as a freshman to step up the way she did."

“I think we just came out with a lot of heart and energy,” Kleinberg said of that match. Down 2-1 in sets, “it was go time,” she said.

"I thought Eagle was tough; I knew they would be," Kleinberg said. "I thought we played well; I thought they were just a better team on the outside. Coming in (seeded) seventh and tying for fifth at state, we're pretty excited. It was good to end the season on a high note."

MARK NELKE/Press Claire Holding, left, and Sarah Rogne of Post Falls zero in on the pass during a match against Madison of Rexburg on Friday afternoon at the state 5A volleyball tournament at Coeur d'Alene High. 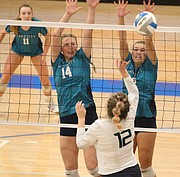 MARK NELKE/Press Emberlyn Reynolds (14) and Dorie Kiesbuy of Lake City put up a block against Riley Kaiser of Mountain View on Friday afternoon at the state 5A volleyball tournament at Coeur d'Alene High.