Boat in and dine out

A different Grease Monkey location expected to look similar to the one under construction in Athol.

The new Sedlemayer's Resort and Restaurant at 7712 W. Spirit Lake Road, offers waterfront dining with the RV park and camping.

Boat in or drive in for steak, seafood, pasta, burgers, sandwiches and shareables, such as baked brie in puff pastry with homemade huckleberry compote, and signature cocktails with local beers on tap.

Mandi and Collin Conway and their daughters Daisy and Zoe offer hours of 4 to 8 p.m. Mondays, Thursdays and Fridays and 11 a.m. to 8 p.m. Saturdays and Sundays, with Sunday brunches starting in November.

With signature drinks and food items such as bagels, toasts and pantries, Mike & Honey Coffee drive-through has opened at 3165 E. Mullan (at the Cecil Road intersection) in Post Falls.

The special now is a pumpkin honeybee. Hours are 6 a.m. to 6 p.m. weekdays and 7 a.m. to 4 p.m. Saturdays and Sundays. The coffee shack also offers organic, locally roasted espresso.

It will include a three-bay oil change, car maintenance, tires, brakes, a touchless car wash and vacuums. Hours will be 8 a.m. to 6 p.m. Monday through Saturday with owner Christian Watts.

Grease Monkey started in 1978 in Denver and has more than 300 locations.

Some of the most interesting landscaping rock features in the Northwest originated in the Columbia Basin.

Called columnar basalts, these were formed by cooling magma which extruded from the earth's core long before the Second Ice Age and the Missoula Floods.

Last week I wrote incorrectly that the rocks originated from sandstone from Glacier Lake Missoula that had hardened into hexagonal (six-sided) rocks. Several readers corrected me, including Dwight McCain, Kathy Marcus and Dave Brown.

As McCain explained, the name "basalt" should be a clue. It's an igneous rock that came from lava that covered large areas of the Columbia Basin in many different flows. When the hot magma gradually cools, it condenses into hexagonal-shaped columns perpendicular to the flow. The larger columns usually indicate slower cooling.

Places in Washington where these are visible include the Columbia River Gorge at Vantage, Highway 28 south of Wenatchee, Moses Coulee, Grand Coulee and Spokane Falls.

As a landscaping specialty, the most obvious are on the way into Spokane Airport. Locally, small ones are along the Higgens Point Trail at the end of Coeur d'Alene Lake Highway. 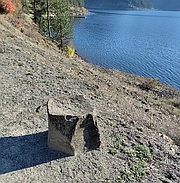 A different Grease Monkey location expected to look similar to the one under construction in Athol. 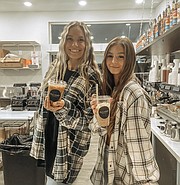