JASON ELLIOTT/Press From left: Coeur d'Alene's Max Cervi-Skinner, Jacob King, Lachlan May and William Callahan get off the starting line during Thursday's 5A Region 1 meet at Farragut State Park. Coeur d'Alene won the boys regional title, the program's first since 2015.

ATHOL — Coeur d’Alene High cross country coach Cathy Compton had a feeling at the start of the year that her boys squad could be special.

And they were on Thursday.

Coeur d’Alene placed two runners in the top three with freshman Max Cervi-Skinner finishing second in 16 minutes, 31.7 seconds, followed by teammate Jacob King, a sophomore in 16:54.4 to breeze to the 5A Region 1 championship on Thursday at Farragut State Park.

“The boys have been working hard together,” Compton said. “And that’s the advantage we have right now. They’re true teammates and worked together as a unit. And that’s what builds championships. I think we’re going to see good things in the future with this group.”

“They knew they had their work cut out for them today,” Compton said. “I think they rose to the occasion and persevered. I know every team has had their challenges, and we had ours today, but the girls gave it their all.”

“It felt really good to win,” Peters said. “It was definitely different running without my teammate, which I always do. It was kind of nice racing for her, because that was something that she wasn’t able to do. It was a good day, and about accomplishing getting to state.”

“Sammie and Annastasia run together really well,” Trefry said. “With Sammie being out, Annastasia made it an amazing run and they’re really strong together. Sammie’s cleared to run at state, and we’re happy we’re going and she’ll be able to run.”

This season, Wood has claimed individual championships at the Farragut Invitational, Mountain West Classic in Missoula and Bellevue Invitational. Peters won at the Inland Empire Challenge in Lewiston on Oct. 9.

“Hats off to Coeur d’Alene,” Trefry said. “They ran a real close race, with it coming down to one point, but this is in the past right now. Now we’re thinking about Eagle Island.”

4A: Sidelined by illness earlier in the season, Lakeland junior Owen Elizondo-Bachiero wanted to come back and be better than he was before he was taken out of the lineup.

Elizondo-Bachiero, who was in third through the first mile of the 4A boys race, finished seventh to qualify for the state 4A meet next Friday at Eagle Island State Park.

“I had to miss a few meets because I’d gotten COVID,” Elizondo-Bachiero said. “After that, I wanted to be right where I was, and it turned out I was better than when I was coming back.

“I just had to stick on the guy in front of me and pass him when I could,” Elizondo-Bachiero said. “I’m super excited to get to state.” 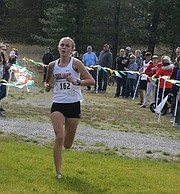