Suicide on the rise


Courtesy of SPAN of North Idaho

Scanning the QR code links to the Idaho Lives Project and the free, one hour, Question, Persuade, Refer training to assist with suicide prevention. 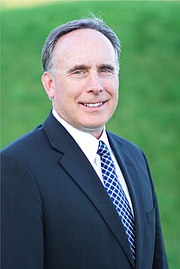 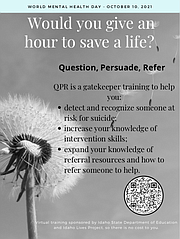 Scanning the QR code links to the Idaho Lives Project and the free, one hour, Question, Persuade, Refer training to assist with suicide prevention.

COEUR d’ALENE — Sunday marks the 29th anniversary of World Mental Health Day, bringing awareness to the plight of those struggling with mental illness.

Coinciding with the anniversary, the Suicide Prevention Action Network will host a virtual 5K “Break the Silence” walk on Sunday.

Though mental health awareness has come a long way, and “words like 'crazy' and 'lunatic' are used less flippantly,” there's much we can do as a society, said Jill Ainsworth, management assistant at Panhandle Health District and part of SPAN.

“There is still a stigma attached to discussing or suffering from mental health illnesses,” said Duffy. “Individuals are suffering in silence, even when 25% of the public is dealing with those challenges.”

It's this suffering in silence that may have inspired the use of party beads to communicate with others struggling with suicidal thoughts, supporting someone who is struggling or has lost someone to suicide.

If you notice trail walkers with colored beads hanging from their necks, they're not for celebration’s sake; they carry heartbreaking stories with them, Ainsworth said.

Called “honor beads,” they're worn so a connection is created, even without a painful conversation.

“You see someone with the same color bead as you and you instantly understand how they feel,” Ainsworth said.

Gold indicates the loss of a parent, silver the loss of a first responder or military veteran. Green represents a person who struggles or has attempted suicide, teal is for someone supporting a person who is struggling. Blue means you support suicide prevention.

“The goal is to have everyone wear blue,” Ainsworth said.

Suicide is only one aspect of the mental health crisis but accounted for 82 deaths in North Idaho last year and 77 in 2019.

“Helping to relieve the suffering is Panhandle Health District's goal,” Duffy said. Getting knowledge about available resources out to the public is key.

“We have great resources, medications and therapy. Support is out there and available,” Duffy said.

Social networking is a big part of assisting with mental health issues. Isolation exacerbates those issues and living in a more rural area may contribute to that isolation, Duffy said. Reaching out can help.

SPAN serves the five northern counties and was founded in 2003. It can be reached at 208-415-5103 or at spannorth@gmail.com and on Facebook.

For those needing immediate crisis assistance, The Northern Idaho Crisis Center in Coeur d'Alene is open 24 hours, seven days a week, 365 days a year. Visitors are welcome to drop in at 2195 Ironwood Court, Suite D and stay for up to 24 hours.

Trained responders are available at 208-625-4884 and will talk callers through the crisis, connect them to resources and often follow up over the next several days.

The Idaho Lives Project offers a one-hour, free, online training in QPR, or Question, Persuade and Refer training. It trains citizens to recognize the signs that someone may be thinking of suicide, and gives them effective tools for talking with that person and getting them the help they need.

"It's kind of like knowing CPR," Ainsworth said. "The know-how to notice signs and symptoms, and how to keep them alive long enough to get help."

Those wishing to participate in Sunday’s 5K “Break the silence” virtual walk may register online at https://bts2021virtual5k.eventbrite.com or on the SPAN of North Idaho Facebook page.