Beloved father, grandfather and great-grandfather, Albert “Al” Vernon Ellingson, 95, of Coeur d’Alene, Idaho (formerly of the Silver Valley) passed away Oct. 2, 2021, at the Schneidmiller Hospice House in Coeur d’Alene. He was born June 10, 1926, in Reynolds, N.D. Al was the son of Elling and Katherine (Shriner) Ellingson.

Al proudly served in the U.S. Navy during World War II. He moved to the Silver Valley in 1948 from San Francisco, Calif.

Al drove a delivery truck for Panhandle Distributors in Kellogg for 30 years. He then worked in maintenance for Ross Oil Company and lastly worked for True Value Hardware store in Wallace.

Upon Al’s request, no memorial services will be held.

The family suggests memorials may be made to the Schneidmiller House, 2290 W. Prairie Ave., Coeur d’Alene, ID 83815.

Shoshone Funeral Services and Crematory, Kellogg, is entrusted with services. You may share your memories with Al’s family and sign his guest book at shoshonefuneralservice.com. 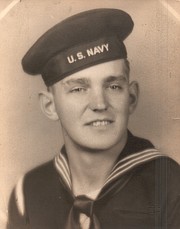