Loving husband, dad, papa, and papa great. Gary Woodson passed away on Nov. 25, 2021, surrounded by his daughters and grandkids, Brian, Tyson and Vanessa, in Coeur d’Alene, Idaho. He was born on April 14, 1939, to Bernard and Edythe Woodson in Menlo, Iowa. He was one of 11 children.

He owned and operated a Shell gas station in Niles, Calif., and he also worked at the Steel Mill in Union City. The family moved to Post Falls, Idaho, in April 1973. He owned the Husky Truck Stop with his dear friend, Roy Langlitz, for several years. He then opened his own business, Gary’s Backhoe and Grading, and did that for the remainder of his life. Gary was a skilled backhoe operator. He helped his friends and neighbors often by removing snow, building driveways, putting in septics and sewers. Gary loved to take his grandkids and great-grand kids for rides in his backhoe.

Gary enjoyed spending time with his family. They were one of his greatest accomplishments. He loved to take them fishing, boating and camping up at Lake Pend Oreille with his friend, Roy Langlitz and his family. Gary went on a yearly fishing trip to catch salmon for over 30 years at Sekiu, Wash. Various friends and family would join him on these fishing trips.

Gary enjoyed having breakfast at the Falls Café for over 30 years every morning. His favorite pastime was playing Keno at the CDA Casino.

In lieu of flowers, donate to a children’s charity such as Shriners in Gary’s name.

Visit Gary’s memorial and sign his online guestbook at englishfuneralchapel.com. 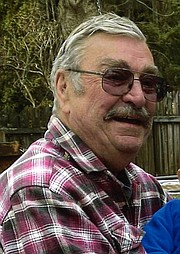