More in the mall

With buys for Christmas, Black Sheep offers clothing, gifts, camping items and toys. Gradually moving from its location near Costco off Government Way, the fishing goods will be moved in January and the hunting goods in February and March when it will close there.

Owners Dave and Barb Knoll started Black Sheep in 1975 in the old location behind the At Home store off U.S. 95, which they still use. It's closed during the move and will reopen in the spring.

Owners Josh and Ginger Cantamessa will have 12 taps, local ciders, seltzers, wine, deli sandwiches, rotating soups and salads with seating for 24 at five tables and 15 at the art-deco-inspired bar.

With healing benefits, tranquility and relaxation with opening specials, the saunas are each made with different species of wood in a private booth. Five accommodate two or three people, and one can accommodate up to seven people. The cold plunge is maintained at 40 degrees and continuously filtered and actively chilled.

Owner Richard Alaniz is a trainer and AKC certified evaluator and the northwestern representative for Canines With A Cause, a nonprofit organization that provides certified service dogs for veterans. 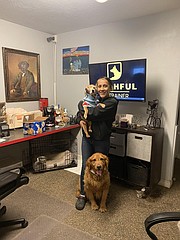