Huckleberries: When the smelter stacks fell

Stephen Shepperd of Coeur d’Alene paid for a helicopter ride to get a last close-up view of them.

A bagpiper played “Amazing Grace.” And Anna Chong of the Minnesota-based Engineering Demolitions began a countdown. At zero, Phil Peterson of Nampa pushed a plunger, signaling a demolition expert to trigger some 500 pounds of dynamite embedded into the bases of the slender, concrete structures.

At 2 o’clock that Sunday, 25 years ago, four Bunker Hill smelter smokestacks that had dominated the Silver Valley skyline for two decades near Kellogg fell in roughly 30 seconds. The 610-foot stack went first. Then, the two measuring 202 and 200 feet. Finally, the 715-foot spire slowly collapsed.

The four chimneys fell into trenches, where they were later broken up and buried.

“The biggest tower belly-flopped into the hillside and gave off a roar,” wrote David Kilmer for the Pacific Northwest Inlander. “We yelled and jumped around and watched the dust roll up, and we were glad we were upwind.”

That morning, in an editorial titled “Good riddance to Bunker Hill stacks,” the Press had said: “The stacks stood as monuments to Gulf Resources & Chemical Corporation’s defiance of common sense in its 20-year stewardship of a once great American company.”

After the spectacle, an Idaho Division of Environmental Quality rep predicted that “a new Silver Valley” would emerge with the destruction of the four polluting smokestacks. And it has.

But journalist Kilmer didn’t hear anything about the future of the Silver Valley that day. Rather, people were debating who had gotten the best photos of the tumbling towers.

“Say what you will about symbols, about progress or pollution, or about memories of a different age,” Kilmer wrote. “People came to watch the old Bunker Hill stacks fall down because it was a lot of fun.”

And the answer is: Less than three weeks. The question? How long will it take for some moron to vandalize the new bathrooms on the north side of City Park? Coeur d’Alene Parks Director Bill Greenwood told Huckleberries that a blockhead(s) destroyed one of the sinks this week. The sink was bolted to concrete and supposed to be bulletproof. Yet this genius jumped on the fixture until it detached from the wall. “I need to talk to the manufacturer to see if he has something better than bulletproof,” Bill groused.

Meanwhile, another clown tore up the public restroom at Person Field, stuffing debris down a toilet. “People don’t realize how much is going on,” Bill said. “Sometimes, even I don’t because the parks staff is quick to clean stuff up.” Why would anyone destroy a public restroom? P’haps he — and isn’t it almost always a male? — has Mommy or Daddy issues.

• Poet’s Corner: Engaged on his cellphone/while driving his Beamer,/unhappily thus did/he fracture his femur — The Bard of Sherman Avenue (“I-90 Business Call”).

• Outdoor photographer David Taylor of Post Falls was glad he took the trail less traveled around Tubbs Hill last Friday. In doing so, he avoided a man kicking a giant inflatable ball along the main loop. Afterward, David quipped, “All inflatables should be on a leash.”

• You may think that Shelly Robins Zollman of Coeur d’Alene is drinking the Kool-Aid — pink Kool-Aid, that is — but she doesn’t care. She refers to her lipstick application skills as “7-Year-Old Cherry Kool-Aid.” She’s so accustomed to applying lip balm over lipstick that she does what she calls that “smeary thing.” Now, here’s a woman who’s comfortable in her own skin.

• Bumpersnicker (on a gray Dodge van at U.S. 95 and Kathleen Tuesday): “Christians aren’t perfect, just forgiven by a God Who is.”

• The Press headline on the day after the local GOPrimary of May 28, 1996, said it all: “Rankin finally wins.” After years of losing political races, from highway commissioner to governor, tax activist Ron Rankin upset incumbent Commissioner Bob Macdonald and went on to serve two terms. And that’s why you should never give up.

• Angela Goodman of Rathdrum was surprised to fish a letter of appreciation from Deputy Hubby Doug’s burn pile. A company CEO wrote Doug: “We see you and appreciate your hard work and the essential services you provide.” The letter was written a year ago. “Wow,” said Angela, “I need to start opening my husband’s mail.” For Doug, she said, “it’s just a job. But these sorts of things mean a lot to me. He’s a hero to me every day, and it feels good when somebody else notices.” We see and we do appreciate. 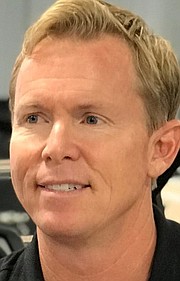