Dog shot in the eye in Hayden

Reddington, a 6-year-old red border collie, is seen here with his owners Jade and Christian Harlocker after having his eye removed during an emergency surgery Sunday. The canine was shot in the eye with a metal pellet, allegedly by an angry neighbor. The Harlockers are filing a lawsuit and are advocating for stricter animal cruelty laws in Idaho.
Courtesy photo

Reddington, a red border collie, was shot in the eye with a metal pellet on Saturday. He's seen here with his owners, Jade and Christian Harlocker, after the damaged eye was removed.

Jade and Christian Harlocker are seen here with their dog, Reddington, before he was shot in the eye with a metal pellet on Saturday evening. Red had to have his eye removed and is expected to recover.

HAYDEN — A 6-year-old red border collie had his eye removed after being shot with a metal pellet gun at close range Saturday.

Owners Christian and Jade Harlocker were at a barbecue about a mile away from their Hayden home when they received a sound alert from their outdoor security camera.

"We checked it and heard our neighbor was playing his angry music really loud. He had been screaming and yelling," Christian said Monday.

Christian and his soon-to-be brother-in-law went back to the house, where the border collie, Reddington, and Jade's sister's dog were in the backyard, which is bordered by a chain link fence.

Both dogs were cowering in the bushes. Christian right away saw something was wrong with Reddington.

"Both of his eyes were swollen shut," Christian said. "I didn't know immediately what happened."

Christian said he was holding onto the hope that Red's eye was bruised and that he had only been hit with something. The men confronted the neighbor, whose name is being withheld at this time.

"He said, 'I told you I was going to shut your dogs up,'" Christian said. "I was really mad at this point — this is like my child. Luckily he didn't tell me at this point he shot him, but he did confirm he did something.

"I made our encounter very brief," Christian added. "He was highly intoxicated; he was being belligerent."

The Harlockers called the Kootenai County Sheriff's Office to file a report. A nearby veterinary technician friend came over to inspect the injury and took Reddington to an emergency clinic after deputies arrived and saw what damage had been done.

"I was totally devastated he was injured. He could barely see out of one eye," Christian said. "The most heartbreaking part, he wanted to play with the police officers."

The neighbor was arrested under a citizen's arrest but was returned 10 minutes later because the officers realized the incident had no witnesses.

The Harlockers are in the process of hiring an attorney. They have filed temporary orders of protection. They believe the neighbor lured the dogs to the fence with treats before shooting the pellet gun. Christian said officers confiscated the pellet gun.

They described Red as a sweet, trusting dog that seldom barks.

"He cares about his toy and his toy only," Jade said. "The only way he barks is if there's another dog and he doesn’t do it very often. He’s been really friendly. There’s times when he runs out to play with this neighbor."

Christian said he never expected violent behavior from the neighbor.

"He’s threatened the (other) neighbor’s dog, never ours," Christian said. "We never thought it would come to this."

Although he's expected to fully recover, Reddington had a less than 1% chance of regaining vision in his eye because the pellet went through it and lodged deep into his eye socket, where it can't be removed.

"You can see it as clear as day on X-ray," Christian said. "It’s almost 3 inches into his head."

According to the Animal Welfare Institute, Idaho is the worst state when it comes to reporting animal cruelty and abuse. Punishment for cruelty to animals ranges from $100 to $5,000 fines and up to six months incarceration for first offenders.

Jail and fees increase with offenses, but everything is decided case by case and arrests aren't always made, especially if there are no witnesses or evidence.

The only thing that can be done is to report incidents to Animal Control.

"It's something we have subliminally known is an issue in this state," Jade said. "You don’t understand the importance of its deficiency until your animal, who has no voice and can't testify, is in that situation. As people, you feel totally helpless."

The Harlockers praised the responding officers.

"You could tell they wanted to be able to do more,” Christian said. "They couldn't say anything because it's their job, but you could read the expression on their face.”

Jade and Christian are determined to raise awareness about animal cruelty in Idaho and to change the consequences from misdemeanors to felonies. They're also raising money to help with medical bills and expenses as they seek justice for Red.

"We plan to pursue a civil case as well as stand on the Kootenai County prosecutor's office to prosecute the criminal side of this as much as possible because of the malice. Those are our legal objectives," Christian said. "It’s not about the sympathy as much as it is about positive change. We don't want to see him get a slap on the wrist.

"We want to be sure justice is served as best as possible and let people in the community know there’s people like this who exist."

No longer feeling safe at the home they've been in since 2018, the family is hoping to move.

They're just glad their dog is going to be OK.

Jade and Christian Harlocker are seen here with their dog, Reddington, before he was shot in the eye with a metal pellet on Saturday evening. Red had to have his eye removed and is expected to recover. 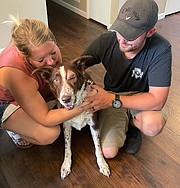 Reddington, a red border collie, was shot in the eye with a metal pellet on Saturday. He's seen here with his owners, Jade and Christian Harlocker, after the damaged eye was removed.