Dog Day in the Valley

One of the 66 dogs from a Kellogg hoarding situation taken in by the Kootenai Humane Society peers through the kennel gate on Tuesday.
BILL BULEY/Press

Some of the dogs from a Kellogg hoarding situation look around in their kennel at the Kootenai Humane Society.

Photo courtesy Kootenai Humane Society Some of the dogs in a Kellogg hoarding situation look up as people enter the house on Monday.

HAYDEN — The Kootenai Humane Society took in 66 dogs Monday from a hoarding situation in Kellogg.

Terriers, Jack Russells and Chihuahuas, puppies to adults, were among the breeds huddled in groups in kennels, some poking noses through the fencing, some barking and trying to escape their holding areas, and others cowering in the back.

Debbie Jeffrey, KHS executive director, shook her head in disbelief as she took a brief break Tuesday from helping with the new arrivals.

She said it was by far the most dogs KHS has rescued from a single case.

“I’ve never seen anything this bad,” she said.

Kellogg Police Sgt. Paul Twidt said the dogs were discovered Monday when the landlord of the home at 418 W. Mullan Ave., along with Kellogg Animal Control Officer Sheri Morgan, went to the property to do a walk-through following multiple notices to the tenant.

The night before, the landlord was notified by a text message from the phone of the tenant that there were multiple dogs living in the residence and they needed help.

The home was reportedly completely soiled. The tenant was gone.

“They’re all pretty much the same breed, so (they) have probably kept them there for quite a while,” Twidt said. “It’s a pretty classic case of hoarding.”

To the surprise of the responders, most of the dogs showed that they were well fed and even had their nails clipped. While it was apparent that the dogs had had the run of the home, Twidt suspects they were mostly kept downstairs, as neighbors told KPD they had no idea that the home’s occupant had even a single animal.

The occupant of the home is missing and has not been contacted. Twidt said KPD plans to press animal cruelty charges.

Morgan volunteered her private truck and horse trailer to transport the dogs to KHS.

Of the original 85 dogs that were discovered, 83 survived. One was dead inside the home and one had to be euthanized. Some of the dogs were placed with foster homes. Most are at KHS.

All nine cats have been taken in by the Silver Valley Cat Wranglers.

Jeffrey said it is believed the woman left the home Thursday and left some food on the floor for the dogs. She said the woman wasn’t supposed to have pets. Jeffrey was surprised no one reported so many in one home.

"How this woman kept 85 dogs quiet and no one heard some barking, I don’t know,” she said. “Nobody even knew she had dogs. How can you keep that many dogs quiet?”

But the dogs sent to KHS, including some older ones, were in generally good health.

“You won’t believe how cute they are. They are just the sweetest little things. You just want to hold them all,” Jeffrey said. “We don’t have to spend time acclimating them to people. How she did that, I don’t know.”

“Normally with hoarding cases you’re working with temperament and illness and getting them to trust you,” Jeffrey continued. “These guys have not been abused.”

KHS staff spent Monday night handling each dog in order to detail their age, sex and condition. Four were pregnant. Thirty-three were male.

“We really didn’t have trouble with any of them,” Jeffrey said. “That’s not common when you have that many dogs in a hoarding situation.”

She said a Thompson Falls, Mont., shelter is going to take 15 of the dogs.

“That still leaves us with quite a few here to take care of,” she said.

She said the case is an example of why KHS needs a new shelter, so it can have dedicated rooms for isolation and puppies, rather than placing them all in kennels in rooms with other dogs.

Jeffrey said all the dogs must be fixed and some could be ready for adoption this weekend.

She said they have a lot of work to do caring for so many small dogs, but volunteers have been stepping up. 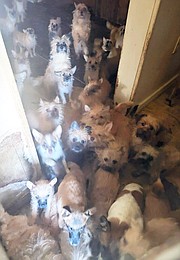 Photo courtesy Kootenai Humane Society Some of the dogs in a Kellogg hoarding situation look up as people enter the house on Monday.

Some of the dogs from a Kellogg hoarding situation look around in their kennel at the Kootenai Humane Society.