Wishing you a day filled with all the love and happiness you have shared with so many.

You are the best Husband, Father, Grandpa, Friend and Citizen there could ever be.

We are blessed from the heavens that you were born June 12, 1928, which is 93 years ago. You lighten our world by just being with us and we cherish you more than you could ever know.

You are an awe inspiring role model in everything you do. We genuinely thank you for your service during the Korean War defending the freedom and liberties we enjoy today. You have always been so humble and never asked for anything in return but finally received the well deserved recognition afforded by the Korean government on July 27, 2019.

Today we celebrate YOU and all you stand for. We love you more than there are stars in the Galaxy.

There are two MSU honor roll lists, the President's List and the Dean's List. To be eligible for the lists, students must have earned in at least 12 college-level credits. This honor roll list was current as of May 27 and includes all registration corrections or grade changes processed to that date.

North Idaho students named to MSU's president's or dean's lists, ordered according to their hometowns, follow: 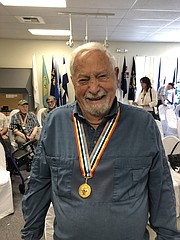