First of a two-part series. The second part will publish Tuesday.

Editor's note: The Press is publishing a series of articles on issues related to rampant growth, including its impact on taxes. This is one of those stories, Part 1 of a two-part series. Part 2 will be published in Tuesday's Press.

Several bills have attempted to ease the rapid rise of property taxes in Idaho over the years. In the 2021 session, House Bill 389 aimed to change the formula and slow growth by setting a cap on how much cities and counties can collect from taxpayers.

However, it's not just cities and counties that impact property taxes. Other taxing entities like school, highway, water and library districts rely on property taxes to fuel budgets and keep up with rising service demands in the fast-growing North Idaho community.

Further, property taxes are influenced by property value — another number many in Kootenai County have seen skyrocket since the Great Recession. Market value, and the impact on property taxes, are also not proportional.

Through Kootenai County Assessor's Office 2019 and 2020 data, Post Falls saw that the tipping point in net taxable market value — the difference between property tax reductions and upticks — was 9.71%.

Data shows that 8,331 residential properties (66%) in Post Falls saw a property tax climb between 2019 and 2020. Yet only 71 commercial properties (6%) experienced an increase in the same time frame.

The majority of Post Falls commercial properties, 94%, actually saw a tax decrease, the data shows. For example, in the 2019-2020 tax year, the tax variance for Walmart on Mullan Avenue declined by $12,641 despite a $279,596 increase in market valuation.

Reducing the taxable value of one property only means the burden is redistributed onto others, Enderud said.

"Those taxes then shift over to the other folks that were above this 9.71%. These (commercial properties) haven't done anything wrong or done anything at all in most cases. It's just a formula," Enderud said. "As long as the valuation increase continues with this tax structure, it's going to keep moving away from commercial to residential properties."

Coeur d'Alene Rep. Jim Addis, co-chairman of the Idaho interim property tax committee, said it's a "natural phenomenon" that as more homes are constructed, the sum of residential property taxes will increase. He noted that in conversations with some cities, officials fear that shifting the burden back to commercial could have worse consequences than the impact on residential.

"Some cities are concerned that if we shift so much taxation to commercial to make it have any effect on residential, it will shut down businesses in a community," Addis said. "It is a fine line and not a simple answer. We have to be mindful that without local businesses, we don't have much."

The compound effect of certain factors contributed to the shift "in who pays property taxes," a 2020 policy brief from the Idaho Association of Counties explains. Factors include:

*Removal of the index on the homeowner's exemption

"Because of these factors, residential property owners pay two-thirds of all property taxes collected by local governments," the IAC policy brief reads.

Idaho's homeowner exemption was first enacted in 1981, allowing primary dwelling owners to apply for 20% of the market value of their home with a maximum of up to $10,000, according to the Idaho Tax Commission.

House Bill 389 took the exemption one step further, increasing the homeowner's exemption to $125,000.

"It's a relatively minor adjustment," Enderud said. "It wasn't indexed for inflation. It was a one-time bomb."

However, business owners saw the most significant benefit, more than doubling their potential property tax exemption from $100,000 to $250,000.

"For every property that gets an exemption, everyone else that pays taxes makes up the difference. That money has to come from somewhere," Souza said. "As prices go up, the homeowner's exemption is a measure to help, but obviously, this is not the end-all-be-all. We are still looking for ways that as a state we can respond to property tax concerns but also be responsible, balanced, and fair." 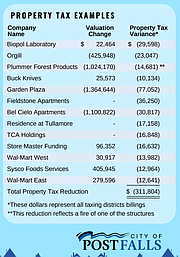