A masked Marvin Satuloff of Coeur d'Alene celebrated Friday with a smile (we think) after receiving the first dose of his COVID-19 vaccine. The local health district is asking for patience as distribution delays have cut Panhandle Health's weekly vaccine quantity down to roughly 2,800 doses per week. "It’s going to take us and our partners a while to get through this group," said Katherine Hoyer, public information officer for Panhandle Health. "That’s just the way that it is. We’re going to have to do this together.”

The United States Marine Corps veteran said he’d survived war and strife in his 84 years on Earth, including his time in Korea, where he manned a radar outpost along the East China Sea.

And now, at least for the time being, he survived COVID-19.

The Coeur d’Alene resident was administered his first dose of the Moderna vaccine Friday, 35 days after the drug company was issued an Emergency Authorization Use by the Food and Drug Administration. Satuloff said, barely half an hour after walking into the Northwest Specialty vaccine clinic, he was happy to report a so-far-so-good.

“I’ve been waiting for this [vaccine] since it was announced,” he said.

The retired IBM account specialist receives weekly transfusions to treat his blood cancer. He said one of the challenges he’s faced has been staying at home during the pandemic that had killed 408,697 American lives as of 2 p.m, many of whom hail from Satuloff’s generation.

While those numbers are somber, Satuloff said his hardest personal challenge was getting information from Panhandle Health about how he and his loved ones could get vaccinated.

“I eventually just called my doctor,” he said.

But that isn’t always an option. Confusion over who to call for a vaccine during a pandemic is on more than a few minds, including Crystal Lansworth, who moved from Oregon to Hayden last July, before a vaccine authorization was ever on the nation’s radar.

That confusion reigned early on during the vaccine rollout, after front line health care workers and long-term care facility residents and staff cycled through the first doses of the Pfizer and Moderna vaccines. Since then, first responders, emergency management workers and other medical professionals in Idaho have begun their vaccinations.

The next group includes those 65 and older, educators and correctional staff.

Gov. Brad Little’s administration took heat in the last days of 2020, as mixed messages between the state, public health districts and doctors left many with unanswered questions.

“I know I’m not getting vaccinated right now,” the in-her-40s office worker at a landscaping company told The Press, reporting she was in good health and had no exemptions that would accelerate her vaccination timeline. “I just want to know where I am on the list.”

That “list” has been a source of consternation for health officials trying to get as many people vaccinated as possible.

“There is no list,” explained Katherine Hoyer of Panhandle Health. “That’s something that really needs to be made clear to people: If you have questions, call us. We’re available to answer those questions. But everyone wants to be put on a list, and that list does not exist.”

Hoyer emphasized that the state’s decision to categorize people into groups — front line health care workers, for example, or pre-K-through-high school educators and staff — will be offered vaccinations as soon as their groups’ respective turns come up.

While many hospitals and providers will assist in the vaccinations of those categories, Hoyer said, the limited supply of vaccine is, by parallel, limiting the number of people who can be vaccinated.

“Currently, we’ve only been able to [vaccinate] people in 1a,” she said. “Now, we’re starting phase 1b, but those have been sent only by invite … And we’re still finding people in phase 1a who haven’t received the vaccine.”

Hoyer said she understands Satuloff’s concerns. She said she wants to assure people like Lansworth who didn’t fall into priority categories or have health care providers that they, too, will eventually be able to receive a vaccine. But she said fully vaccinating the district is an enormous task that will take months to accomplish, adding that the next phase — which will include the 65-and-older crowd — will not happen overnight.

“We do ask for patience,” Hoyer said. “We’re administering and distributing the vaccine to our partners as quickly as we can once we receive it. We receive around 2,800 doses of vaccine per week, and the 65-plus age group is tens of thousands of people in the five northern counties. It’s going to take us and our partners a while to get through this group. That’s just the way that it is. We’re going to have to do this together.”

In the meantime, Panhandle Health urges people who have received their vaccine — either their first doses, like Satuloff, or those who have received both doses — still need to follow health protocols, including washing hands, practicing social distancing, staying home if you’re sick and wearing a mask.

“Even after you get your first dose of vaccine, we need everyone to continue to practice the precautions,” Hoyer said. “There’s been a very small amount of people who have received the vaccine, and that means we don’t have anywhere near herd immunity. We’re all going to have to work together as a community, as the vaccine rolls out, in order to keep each other safe.” 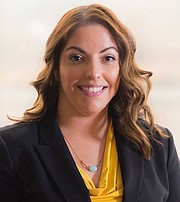