The drive-thru for Linden Coffee Co. at 1502 N. Third St., off Linden Avenue, will open soon.

Owners Cameron and Hollie Napora offer coffees, Italian sodas, granitas, breakfast sandwiches and pastries from 6:30 a.m. to 2:30 p.m. Monday through Saturday. The walk-in shop will open at the end of January with table and counter seating for 24 and patio seating for 12.

The rest of the Linden Lofts complex under construction includes three townhomes, two Airbnbs, a basement business area and garages. Check with Cameron at naporallc@hotmail.com.

A retail store for adventure, health, wellness and exploration with apparel and products for the whole family is Best Life Coeur d'Alene in Suite 105 at 524 E. Sherman Ave. Enter on the Sixth Street side.

Now at 109 W. Kathleen Ave., Massage Therapy by Paula will move to Suite 215 in the Atrium Professional Building at 13403 Government Way in January. Paula Fox will be active in both locations through December.

In the fitness field for more than 25 years, she is a medical cupping practitioner and myotherapist and an advanced deep-tissue and intraoral specialist. The places also sell Beverly Nutrition for protein and supplements.

Hours are by appointment 10 a.m. to 5 p.m. weekdays. Check massagetherapybypaula.com. 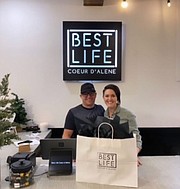 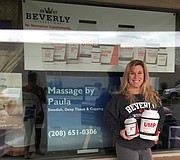