Brandi began his banking career in 2013 as a credit analyst at Mountain West Bank and also served as an assistant relationship manager before being promoted to commercial lender in 2019. He grew up in the region and earned associate's and bachelor's degrees in business administration from North Idaho College and Lewis-Clark State College, respectively, as well as an MBA from Gonzaga University.

He has served for many years as a coach and board member of local youth soccer organizations. In addition, Brandi is active in the Coeur d'Alene School District's Long Range Planning Committee and his local PTA.

Morton joined Mountain West Bank in 2015 and served as an assistant relationship manager before being promoted to commercial lender in 2018. He has nearly 12 years of banking experience.

He grew up in Athol and acquired a bachelor's degree in finance from the University of Idaho. Morton is a Leadership Coeur d'Alene Class of 2019 graduate. 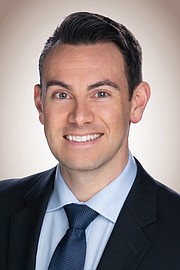