“Zack Snyder’s Justice League,” available exclusively on HBO Max, is a significant improvement on the original movie released in theaters back in 2017.

Without rehashing the entire behind-the-scenes battle over “Justice League” (seek out the recent Vanity Fair profile for a deep dive), the basics boil down to this:

• Warner Bros. execs didn’t like it and exploited a personal tragedy in Snyder’s life to push him off the project.

• Joss Whedon rewrote and re-shot much of the movie to make it “lighter” and more like “The Avengers.”

The main problem: Whedon’s “Justice League” repeatedly forced stilted humor on top of a condensed version of Snyder’s more solemn approach to visuals and story. As a result, every Whedon change and addition stuck out awkwardly.

After years of fan pressure, Warner Bros. finally gave Snyder the opportunity to release his version, and they threw in a cool $70 million to help him complete the special effects, polish the film and add a few extra scenes. The final result is a four-hour epic (double the length of the 2017 release) that at least feels like a cohesive vision. What works and doesn’t largely depends on how you feel about Snyder’s overall approach to Batman, Superman, Wonder Woman and the rest of the DC Comics Universe.

The arc of both versions aims to introduce three heroes, a new villain and a trio of magic cubes. Snyder’s film restores a more cohesive backstory for The Flash, Aquaman, villain Steppenwolf and, in the largest bit of previously unseen footage, the hero Cyborg, played by Ray Fisher. It’s all pretty standard stuff… Cyborg’s lengthy introduction isn’t particularly compelling, unfortunately, and Steppenwolf’s villainous motivations aren’t enough to distinguish him from the typical comic book superbad. Still, something is better than the nothing in the Whedon cut.

The Snyder cut is most successful in restoring visual coherence. The action scenes in 2017’s film were choppy and downright nonsensical in stretches, a result of Whedon and Warner Bros.’ attempt to bring the film in under two hours. In contrast, Snyder’s action scenes stretch on but play out much cleaner, especially in the climax in which the heroes have significantly different objectives compared to the shorter cut (The Flash, thankfully, doesn’t run off to save some random family in the middle of the battle). You could argue there’s maybe too much CGI-enhanced fighting now, to the point where the momentum stalls before the end, but at least you can follow the action from point A to B.

You can compare and contrast a thousand more details here, but it’s important to distinguish Snyder’s product on HBO Max from the version he would have released in theaters had he stayed on the project. With some exhaustive editing sessions, Snyder could probably shave an hour of fat and create a pretty decent three-hour version of “Justice League.” The version we have is a fascinating experiment that showcases a previously unrealized potential. Still, I wouldn’t call it a cohesive movie.

Snyder’s mega-fans now want Warner Bros. to greenlight future projects that continue the director’s vision of the universe. The Snyder Cut includes a new epilogue featuring Ben Affleck’s Batman and a few other DC stragglers living in an apocalyptic world where Superman is the bad guy. It’s revealed to be a “nightmare” (similar to a sequence in Snyder’s “Batman vs. Superman: Dawn of Justice”), though Snyder (and his fans) clearly want to explore this world in a future film or series.

Execs at Warner Bros. don’t seem too interested in continuing down that expensive path… for now. The next Batman film has already been shot, with a new Bruce Wayne in the form of Robert Pattinson and zero connection to the Snyder films. That being said, it seemed outlandish to think Warner Bros. would ever release Snyder’s version of “Justice League,” so anything is possible.

Nevertheless, there’s a reason Warner Bros. steered away from Snyder’s vision in the first place. Outside of Snyder’s devoted online following, audience reaction to “Man of Steel” and “Batman vs. Superman” was largely negative, and even in the expanded “Justice League,” the brooding Superman in particular seems too far removed from what most want from the character. Are there enough people out there who really want to see a murderous Superman lord over an onscreen apocalypse?

Personally, if a future project looks like the epilogue of Snyder’s “Justice League,” count me out. As much as I like Affleck’s approach to an older, broken Batman, I don’t want anything to do with Jared Leto’s laughable (not in a good way) Joker performance or the dusty misery of a universe where Superman rules with an iron fist.

Remove the new “Justice League” from the equation and it seems like Warner Bros. and DC have finally figured out a better approach to their characters (the mess of “Wonder Woman 1984” notwithstanding). “Shazam!” “Birds of Prey” and even the “Aquaman” balanced fun without steering (too far) into Saturday morning cartoon territory, and that new Batman film, scheduled for 2022, so far looks like a continuation of the “serious” Dark Knight world that Christopher Nolan established prior to Snyder’s tenure.

But hey, if things go haywire anyway, then sure, let Snyder go crazy. Just keep Joss Whedon and his quips far, far away from the project.

Tyler Wilson has been writing about movies for Inland Northwest publications since 2000. He is the co-host of Old Millennials Remember Movies, available everywhere you find podcasts. He can be reached at twilson@cdapress.com. 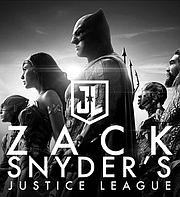