Learning from 'the little guys'

For Beth Hoots, how fast hungry caddisflies mature has implications for the future of nuisance plants in Lake Coeur d’Alene.

The junior from West Linn, Oregon, is looking at the relationship between climate change and the maturation of an herbivorous caddisfly that can graze on Eurasian milfoil, a non-native water plant. She is collaborating with the Coeur d’Alene Tribe, which is trying to remove milfoil from the lake, because it tangles boat propellers, reduces property values and shades out native water plants.

The national scholarship program supports students interested in science, technology, engineering and math research careers. Each will receive a scholarship of up to $7,500 awarded for the 2020-2021 academic year. Beth will be putting her scholarship toward her education at U of I.

Each scholar is selected from an estimated pool of more than 5,000 college sophomores and juniors nominated by their own academic institutions to compete for the scholarships. More than $71 million has been awarded since 1989.

A dual major in ecology and conservation biology and Spanish, Hoots studied freshwater ecology during a sophomore summer abroad in Ecuador. There, she worked with U of I limnologist Frank Wilhelm, a professor in the Department of Fish and Wildlife Sciences.

On their return to Idaho, Wilhelm suggested she continue a study started by a graduating master’s student, Stephanie Estell. Estell was evaluating whether a native caddisfly (Nectopsyche albida), commonly referred to as a white miller, could serve as a biocontrol for milfoil.

“I just saw how much of a self-starter Beth was,” Wilhelm said. “That, and the fact that she has a very forward-looking approach to science, made her perfect for this study.”

Through Estell’s work, the team was convinced the caddisfly would eat the milfoil. But the milfoil grows quickly during the early part of the warm season. On the other hand, the caddisflies need much of the summer to grow big enough to eat the water plant.

Hoots is testing whether projected rising water temperatures will speed the caddisfly’s development. If the insect matures earlier in the year due to warmer waters, it may be more of a threat to milfoil.

“Understanding the effects of climate change on aquatic ecosystems is incredibly important,” Hoots said. “And to do that, you need to really look at what I think are the most important parts of an ecosystem — the little guys.”

Hoots collected immature caddisflies from Lake Coeur d’Alene with the help of the Coeur d’Alene Tribe Lake Management Department. Back in the lab, she separated the insects into groups, which she exposed to different temperatures and tracked the maturation rates. Because her final collection trip of 2019 was called off due to COVID-19 complications, Hoots plans to finish her study during her senior year.

“For my generation of natural resource scientists, climate change will have a huge impact on every study we do. We’re inheriting a world with a rapidly-shifting climate, and already, we’re not going to be able to fix some of the effects from climate change,” Hoots said. “Studies like this are important because we need to look at what we can change.”

For Hoots, who wants to go into marine biology in the future, doing freshwater ecology research is good practice as many of the methods and technologies cross over to saltwater ecology.

“I plan to go to grad school when I finish my undergraduate degrees to study coastal ecology and biodiversity in areas with high human disturbance,” Hoots said. “Our marine ecosystems are so valuable, and I want to make sure we have the scientific knowledge to manage them sustainably.” 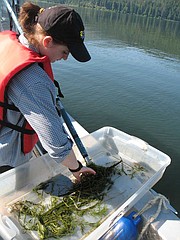