"He saw the need to put the high schools back into 'orange' immediately," district spokesman Scott Maben said Friday, adding that positive COVID cases and associated quarantines due to exposure have been more prevalent in the high schools than at the middle and elementary levels.

"With the numbers we’ve seen recently, it just makes sense to go back to 'orange' to slow down the spread we’ve seen, give our high school teachers and students a break and allow them the space where they can more easily social distance," Maben said.

Normally, the Coeur d'Alene School Board would vote on changing the risk level color during a board meeting or special meeting, but the superintendent possesses the authority to make administrative decisions regarding school district operations. Cook contacted the trustees so they were aware of the decision and understood the rationale.

Cook said he spent time Friday morning speaking with the high school principals, and with that consult, and considering the number of students being quarantined, some multiple times, "we just felt it was the right move to make after the data from Panhandle showed us pretty substantially in the 'orange' category."

"After talking with the building principals, I thought it was in the best interest to pull the trigger," he said.

The change will go into effect Monday, rather than waiting a week. High-schoolers will return to the previous schedule of attending classes in-person two days a week (Monday-Tuesday or Thursday-Friday) and remotely the other three days. Students will use the same schedule as they did for the first three weeks of the school year.

"Any change in our operating status typically would go into effect one week later," reads a Friday letter from the district sent to parents and guardians.

"However, our administrative decision to return to 'orange' sooner for our high schools is in response to the degree to which COVID-19 positive test results and associated exposures resulting in quarantine have occurred among students at that level. We are hopeful that this action will reduce the number of students being quarantined, and help reduce the risk of in-school transmission of the virus at this time."

The board of trustees is still scheduled to meet Monday at 11:30 a.m. to consider moving the entire district from the minimal "yellow" to the "orange" risk level. The board’s discussion and possible action are in response to this week’s decision by Panhandle Health District to place Kootenai County back in the "orange" risk level.

A second letter from the district addressing middle and elementary schools was sent out early Friday evening. It informed families that the district is proposing a new schedule for K-8 students to ensure they receive more in-person instruction than they would under the original blended learning model. This new schedule would remain in effect in either "yellow" or "orange."

The district has seen growing sentiment expressed by many that students, especially the youngest learners, academically and socially benefit from in-classroom learning as much as possible.

Administration is proposing revisions to the district’s reopening plan. The board will consider this proposal during its meeting Monday.

Students in grades K-8 will learn remotely from home on Wednesdays, which will afford teachers time to plan for blended learning; collaborate on improving instruction and the use of Schoology; connect online with families and children; provide additional support for students who are isolated or quarantined; improve cohorting efforts to reduce the number of students quarantined; and clean and sanitize learning areas.

"Because this proposed schedule is designed to persist regardless of whether we are in 'yellow' or 'orange,' the consistency of the new schedule will provide greater stability and continuity while reducing the effects and stress that families and students experience when schools are asked to switch schedules," the letter reads. "In this new proposed plan, the district would reserve the option, on a case-by-case basis, to place a school in the original blended learning schedule, with students attending in person two days a week, if that school is experiencing a high number of COVID-related absences." 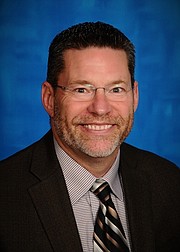