Kootenai County voters will have the chance to vote yes or no on the $50 local option vehicle registration fee on the November 3 ballot. Photo courtesy of Kootenai County.

Traffic jams like this on U.S. 95 are one of the reasons some people are supporting the vehicle fee proposal on the Nov. 3 ballot.

An annual $50 vehicle registration fee on the November ballot intends to curb concerns for Kootenai County traffic and road congestion. Still, residents are divided on whether a costly initiative is the best solution.

Passenger vehicles typically cost $45 to $69 to register in Idaho depending on age of vehicle, with some add-ons for electric or plug-in hybrid features. If passed, the $50 fee would essentially double the bill of more than 150,000 Kootenai based car-owners during an already financially unstable year.

The ballot initiative requires a majority vote to be approved and then continue to charge drivers annually for two decades.

Since 1969, the population of Kootenai County has soared by 340%, Kootenai Metropolitan Planning Organization executive director Glenn Miles said, to an estimated 175,000 at the next census. Much of the county's legacy transportation system hasn't seen significant improvements since the 1960s and 1970s, KMPO data shows, which at the time supported a population of only 35,000.

Rapid growth is a significant factor to the deterioration of the roads, including their age and a usage. Miles said Kootenai's highways and roads are entering an era of problems. Still, the community is split on assessing itself a fee that also includes $25 annually for motorcycles.

"Before us is the ballot measure for the $50 fee," Commissioner Chris Fillios said during Thursday's community development meeting. "What we are hearing, and it is premature at this point, is the trend tends to be against it. Meanwhile, we have extremely low registration fees, and if it doesn't pass, then the last significant change to infrastructure occurred over 40 years ago."

By comparison, passenger vehicle registration costs — excluding electric and hybrid — in Idaho's neighboring states like Washington range from around $68 to $115, Oregon between $122 and $152, and Montana between $28 and $217.

Kootenai County director of community development David Callahan and his staff are drafting a plan to address the issues of growth — including infrastructure — but some options to quell new development seem extreme.

"If this $50 fee doesn't pass and conditions get much worse, I think you're going to see some pretty strict measures taken," Fillios said. "If infrastructure can't keep up, we could limit permits on development, issue a moratorium, create a limited permit system by lottery."

"I have not met anyone who is in favor of it," Brooks said.

Instead, he posed the idea of a gas tax, which hasn't been implemented by the state of Idaho since 2015 and even then was used only to maintain specific roadways.

"It's [the $50 fee] a heck of a way to stop growth. Choke the traffic, make it so miserable to drive down the road, so no one wants to come here," Brooks said. "The $50 fee, I'm afraid, will go down in flames for the wrong reasons. We're heading for a brick wall, and no one is paying attention."

Some people are paying attention, however, mainly from the opposition stance. In addition to various letters to the editor, social media comments, and a survey around downtown Coeur d'Alene, many residents aren't interested in supporting the fee.

"If they don't widen the roads, then there won't be as many people that come here. Maybe they'll go back home," said Kathy McDermott, 57. "I don't really like the idea of the $50 fee."

McDermott has lived in Coeur d'Alene for four years but grew up in the area, spending her childhood coming to the lake with her family from Spokane Valley. Watching the city change has been hard for her; she doesn't like it and wants it to stay exactly how it is.

"When I was little, we used to always come down to the lake, so for me, I don't like change. This is what I like," McDermott said. "It [the fee] just adds more expense, and especially right now, I'm not working, so I wouldn't have the money. This just creates more money to add to my bills and that I don't have."

With the increase of 135,000 people since 1970, Miles said it would not be unreasonable to expect another 132,000 by 2040. This growth could increase traffic and congestion to the level of major metropolitan areas like Portland or Seattle.

"You know it's one of those things. Growth, growth, all we hear about is growth," Sam Bolchev, 34, said. "My question is, why is this fee suddenly here now? Why didn't they start doing this stuff a long time ago?"

After moving to Post Falls when he was 12 from Twin Falls, Bolchev no longer feels like part of the growth issue. He bounced around from Hayden to Dalton Gardens with his family before settling down in one of the new Post Falls housing developments.

"It shouldn't have to be 40 years before we redo our roads," he said. "I think everyone knows it's a problem, but it's not like a new concept. I doubt it will pass, which is sad because I think something needs to get done, but it's $50. People don't have that money; I don't."

Part of Hayden Lake's senior population, Joseph Milkovich, has been a Kootenai County resident for 18 years after moving from Huntington Beach in southern California. Compared to the traffic there, Milkovich said congestion here isn't so bad, but it's gotten worse.

"Sure growth is the problem. Too many people all of a sudden, and the infrastructure is not ready for it," he said. "I saw this happen in southern California, and now it's happening again."

He's not in favor of the ballot fee and said the government should better manage the money it already has to pay for improvements.

"I think they need to reshuffle the money they are already getting. The road problems are there, but this idea of constantly having a hand out is wrong," Milkovich said. "The state now is expected to have an excess of $300 million in funds from taxes. Instead of dispersing it all over, they should put some of it into fixing the roads."

Milkovich refers to the $530 million that Gov. Brad Little is expecting to report from this year's state surplus. Portions of the revenue are expected to be split with tax relief to all Idahoans as well as make "much-needed investments in education, transportation, and water projects," according to an Oct. 9 press release.

Sandra and Isabella Gunn have lived at Hayden Lake for 20 years. They're all for the fee, they said, and feel like it's merely a solution to a problem.

"I think it's growing faster than we can keep up with, that our roads allow, so we are running into the problem of traffic," said Isabella, 23. "We have to adjust to fit everyone and accommodate everyone now; otherwise, it's only going to get worse."

Sandra, 53, compared the fee to school levies and initiatives that come and go over the years.

"I would pay for it to make the improvements," she said. "I absolutely see the problems going on. The 95 seems to be so much more congested. We're not used to it; it's so crowded. Usually, at the height of the season is when we'd see that, but now we see it all the time."

Coeur d'Alene homeowner Gary Fisher, 62, is also voting for the $50 fee. He said he'd had some hesitation, but after sitting down and looking at the projects, he agrees the work needs to be done, at least some of it.

"I looked at all the projects on the ballot, and to be honest, I see the importance of some of them, like the I-90, but others were random to me," Fisher said. "What if they cut down the projects to 10 or eight or a smaller number so that the fee could also be less? That's going to hurt its chances the most."

KMPO's Miles said the list of 12 projects was created by a network of highway districts, cities, transportation organizations, and community groups. According to Post Falls community development director Bob Seale and Coeur d'Alene city engineer Chris Bosley, some projects — like those to Pleasant View and Atlas Road — have needed funding for some time but failed to receive grants.

Kootenai County voters will decide for themselves whether or not to support the initiative by voting yes or no on the November 2020 ballot. 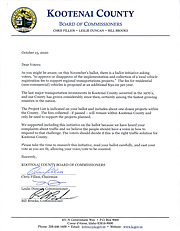 Traffic jams like this on U.S. 95 are one of the reasons some people are supporting the vehicle fee proposal on the Nov. 3 ballot.