Cadet Hoatson joined the CAP when she was 12 years old after watching fellow Cadet Erika Gallus march in the CDA Fourth of July Parade. Hoatson, a sophomore in high school, has dreamt of serving in the military since she was 8 years old.

“I’ve always had a desire to serve my country, I either want to do something medical to further serve or to be a pilot,” Hoatson said. “There is a great combination of that called a flight surgeon who are primary care doctors for pilots.”

Cadet Commander is the highest-ranking cadet in the squadron, tasked with guiding younger cadets through leadership and mentoring programs.

“As a female leader I will hopefully get the respect, I definitely feel prepared. I’ve been leading up to this point for eight months.” Hoatson said. “I’ve been in Civil Air Patrol for four years, so it’s pretty amazing getting up to this point. From being a shy little cadet all the way up into an officer.”

The Change of Command ceremony signifies major changes for the CAP. With the outgoing commander relinquishing their duties to move on to a more advanced position, the change of command ceremony symbolizes a new era of leadership and the end of another.

The CAP youth program is unique in its aviation foundation, serving as an official volunteer civilian auxiliary of the U.S. Air Force. Cadets in the organization carry out emergency services including search and rescue, disaster relief operations, aerospace education, and teenage leadership training.

Nationally, the CAP has been executing COVID-19 emergency response missions including distributing 12,289 test kits, 1.5 million protective masks, 580,559 pounds of food, and 4,192,825 meals as of Monday.

“Civil Air Patrol is an amazing leadership and volunteer opportunity and any teens going in or thinking of serving their country, this is definitely a good thing to look into,” Hoatson said. 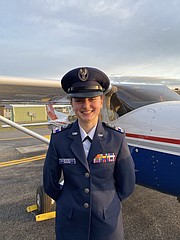