Unearthing the past: local archaeologists add to historical record

Real life archaeology may not have giant boulders and flying arrows and gold artifacts to steal.

But it does have hooch.

Local archaeologist Jennifer DeRose has seen her fair share of beer bottles and other “refuse” – or garbage – from the early 1900s that suggests a fairly regular consumption of alcoholic beverages.

“Any site that doesn’t have any beer, liquor, or hooch is unusual for North Idaho [of a certain period],” DeRose said.

Archaeologists like DeRose find, record, and often study sites of prior human habitation or activity – places that show cultural modification.

While that “cultural modification” may be as mundane as a group of old beer bottles, it does tell a story, particularly when put into the context of history, such as a recent federally administered and funded project DeRose had in Cougar Gulch.

During a pedestrian [or foot] survey “in the field”, DeRose and her team weren’t expecting to find much.

Brown glass, she explained, typically means beer – much like it does today. The absence of it is unusual for the sites DeRose records in the area.

“There’s usually broken glass with them,” she said. “It’s rare to find no brown glass.”

The team did find something else, however.

“There’s probably 10 to 20 one-gallon jugs that were more likely indicative of making or drinking hooch,” said DeRose. “That clarifies a lot of the lore that people around here were drinking or participating [during the Prohibition era].

According to Idaho’s State Archaeologist, Lindsay Johansson, archaeology is especially important for its ability to add to what we know about the past to provide a “more comprehensive view” of history.

When archaeologists like DeRose perform surveys and research, they dig up some of this knowledge – and fill in some of the gaps in the historical record.

“Many people may not realize that even within some of Idaho’s larger towns and cities there are important questions that can be answered only by archaeology,” Johansson said.

“As towns and cities in Idaho continue to grow, uncovering and understanding these unwritten stories becomes increasingly important.”

That’s where archaeologists come in.

DeRose has worked as an archaeologist for about 15 years. After working with a private firm for a few years and then with the Schitsu’umsh (Coeur d’Alene) Tribe, on-call and full-time, for nearly a decade, she started her own business as Archaeological Cultural Resource Management Consultant (abbreviated A CRM Consultant). Although many of the sites she works with are still tied to the tribe.

Cultural resource managers’ work includes looking at historical sources, surveying land, and attempting to identify potential “sites” of past human activity, using an integrated approach as they look at what DeRose says is “generally speaking, a non-renewable resource.”

“Nowadays the field of cultural resource management has evolved to be contract archaeology,” said DeRose.

Projects can be funded through state, local and federal government agencies or by private companies– and they come about for a variety of reasons.

Someone looking to build an apartment complex, for example, may need to consult a CRM firm or archaeologist-consultant like DeRose to survey the land first for surface and subsurface sites. Anything found can be researched and documented. If necessary, she can then provide guidance on protective measures.

Once hired, DeRose will look at the terrain, conduct research for a pre-field review, and go out to look for anything that might have been culturally modified, often with the assistance of field technicians or other trained workers. Whether they decide to dig depends on what they find.

While some archaeologists work for private CRM firms or as consultants, archaeologists may also work for universities – often as professors who teach related courses and lead “fieldwork” in the summer, or for the government.

Each state has an official State Archaeologist position – like Idaho’s Johansson. Archaeologists may also be employed by state agencies such as the Bureaus of Land Management, the U.S. Forest Service, or even the Departments of Transportation.

The details of every job, and every project, can vary, but the role of the field is more or less the same: to uncover pieces of the past to better understand it.

“With regard to the ancestral inhabitants of Idaho, we can learn a great deal from the oral traditions and knowledge of native people, but there are still details of the past in Idaho that can only be learned from archaeology.”

Archaeological investigations at the Bear River Massacre National Landmark, for example, helped clarify the location of the battle on the 1,200-acre site, providing critical information for the North West Band of the Shoshone Nation, said Gallimore.

“The old adage ‘history is written by the winners’ may not always be accurate, but what we know about the past is only a small fraction of what actually occurred,” said Johansson.

“Idaho has a long history of humans living here, but there is still a great deal left for us to learn.”

Important though it may be, archaeological field work is not for everyone.

“A lot of times the techs that come in…learn that it isn’t all glamour,” DeRose said. “There’s a lot of bush-whacking.”

Much of her work in North Idaho involves pedestrian surveys (on foot) in woody backcountry. With wildlife, foliage and a distance of some 30 meters apart from partners, those without survival training or experience being in the country may find the experience more difficult.

“There’s some field techs, I’ve found, that had a preconceived notion of what surveying actually consisted of.”

“They quickly learned whether or not it was something they wanted to do.”

Although most field work is physical, outdoorsy, and often difficult, the reality can vary by location.

“Urban archaeology” projects also provide historical insight. Johansson pointed to a University of Idaho excavation in the yard of a home near the Basque cultural center in Boise which provided insight into early life in the state capitol.

“These types of “urban archaeology” projects give us a different perspective on the past and let us know about parts of past life that people may not have thought were important to record.”

Still, for those who brave extreme weather conditions, hard labor, and discoveries that may consist of hundred-year-old trash, the reward can be a sweet one.

“That’s something that is very special, I can say, about archaeology ,” said DeRose. “It has enabled my access to history and part of the landscape that is often not accessible to everyone.”

After all, the access to different places and the humanity found in them is what helped draw her to the field.

“I remember feeling the place,” she recalls of seeing petroglyphs, or rock art, with her family growing up, “The landscape, the remnants of different people that had been there thousands of years earlier and that was striking to me.”

“It was almost a spiritual experience, and I found myself wanting to understand what I was experiencing more.”

And remember, real life is not like the movies. Indiana Jones may be able to find and remove artifacts with few legal ramifications, but looting cultural finds – particularly off of tribal land – is illegal.

“It’s still very much a problem in North Idaho,” DeRose said. “There really is a finders-keepers mentality.”

And yes, this applies to arrowheads and other objects commonly thought to belong to the “discoverer.”

“All people have left evidence of their lives on and around Coeur d’Alene Lake, tributaries and the Spokane River, and throughout the region. The legacy of this evidence is our history and the heritage of all people. Removing or damaging these resources or artifacts is like tearing a page from our living history book…These are invaluable resources and cannot be replaced.”

You need the education, training and permission to actively work as an archaeologist.

But if you want to “be an archaeologist from the comfort and safety” of home, Johansson suggests visiting the Idaho State Historical Society webpage History.idaho.gov/historyathome. 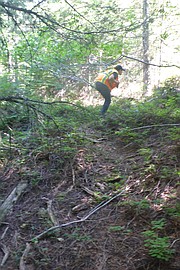