Robert DeLaurentis of San Diego survived an icy 18-hour flight with failed navigation equipment, gelled fuel and extreme weather over the South Pole in 2019. He said the experience forced him to let go, to conquer fear by succumbing to a faith that things will "fall into place." Courtesy photo

When Zen pilot Robert DeLaurentis set out to circumnavigate the world pole-to-pole, it was about more than daredevil feats, setting records, or the book he’ll write about it. Before taking off in 2019, DeLaurentis told me that by flying the world and interviewing its inhabitants, he hoped to illustrate the oneness of humanity. To witness our common connectedness, to promote peace.

He calls it, “one planet, one people, one plane.”

True to his moniker, getting grounded in Spain has proven more opportune than inconvenient. Stuck in a kind of pandemic holding pattern on foreign soil, he said he’s unexpectedly become more Zen with uncertainty.

Thanks to monks, meditation and — because DeLaurentis is no monk — sangria.

“Part of what I think is going on with the planet now is a lot of uncertainty — no one knows what’s happening and where it’s going to go,” DeLaurentis said in an April 9 conversation. “And that’s letting go of your ego, of wanting to control things.

“With this trip I had to do that, to let go of the ego, because there were too many firsts, too many things we couldn’t control.”

Letting go of the ego’s desire for control is an element of spiritual growth, according to spiritual leaders of different faiths.

Flying alone can be a spiritual experience. There are moments when it’s just you and the airplane, when thoughts and separateness fade and it feels like transcending mere existence.

Eighteen hours aloft over water and ice forced that convergence for DeLaurentis.

“Near the South Pole, navigation equipment tends to fail, so I had to plan on that,” he said. “I call it the zone of confusion. We march ahead not knowing. So you can either be scared to death or it’s a deepening of your faith — faith that things will fall in place.”

His plane had never been tested at full fuel for such a long stretch (dangerous due to weight and stress). At the pole the fuel gelled, navigation failed, he faced bad weather and extreme fatigue with nowhere to land. Who wouldn’t be terrified?

“It’s the scariest, riskiest, highest probability of failure I’ve ever done,” he said.

“Then it hit me: if your dream doesn’t scare you, it’s not big enough.”

While that wasn’t the first daring thing this U.S. Navy veteran has done (he was the first to fly a single-engine Piper Malibu around the world, in 2015), he said this one really threw him.

But it was also one of his “Zen moments.”

“(The experience) was just this time — like a time between — pushing myself and the plane to absolute limits. It made me realize I was so much stronger than I ever thought possible … I just kept moving. I did what I could and skipped judging myself.”

Judgment brings us back to the monk.

His global flight interrupted at Sitges, Spain, a friend suggested visiting a 1,000-year-old mountain monastery in nearby Montserrat. That visit became a two-day stay, and transformative for DeLaurentis.

“It’s a magical place in terms of the energy, the beauty,” he said.

He stayed in a small room with a simple bed, desk and small window overlooking a garden plaza — a room he called “charged with energy.” He breakfasted with monks in the morning and prayed with them at night.

In between he meditated in the beautiful gardens with an ocean view. Meditation was a habit he said he’d gotten away from and which the monks said is the path to inner peace.

And step one for world peace.

“One person I talked with in Rio said in order to find peace in the world we first have to find it in ourselves. Then we can bring it to the world.”

DeLaurentis had to leave this peaceful haven when Spain went on COVID-19 lockdown.

“I asked one of the monks, ‘Why is this happening? Is it a punishment?’

“He laughed and said, ’No, it’s just the natural order of things. Disease and viruses have been around as long as humans. Humans forget they’re not immortal, especially with medicine and modern technology.’ He emphasized our time here is limited and these viruses come along and take part of the population, like culling the herd (impersonally).”

But we can take a lot more from it.

“These challenging times are lessons on a global scale. Sometimes we think ‘this is not enough, or ‘we are not enough.’” In his travels DeLaurentis has found that feeling to be universal. “But very little really is ‘enough.’”

DeLaurentis says understanding that universal human truth is something we must work together for, and that sharing the same pandemic experience globally will increase the compassion we feel for one another.

“The virus helps us to simplify our lives and figure out what’s important to us,” he said. “As we’ve interviewed different types of people around the world — dog sled mushers, artists, scientists, athletes — everyone is telling us the same thing, that what matters most is family, compassion for others, love. We are all releasing the same thing.

“I think the virus will bring the planet together in the end.”

And the sangria? DeLaurentis was enjoying one during our WhatsApp call, a post-meditative afternoon habit (just the one) he says goes perfectly with the hillside view of his temporary Spanish hometown. It’s the little things.

Sholeh Patrick is a pilot who’s firmly grounded as a columnist for the Hagadone News Network. Email: sholeh@cdapress.com

Robert DeLaurentis of San Diego survived an icy 18-hour flight with failed navigation equipment, gelled fuel and extreme weather over the South Pole in 2019. He said the experience forced him to let go, to conquer fear by succumbing to a faith that things will "fall into place." Courtesy photo 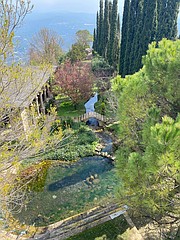