Once a gold and gemstone mining town from the 1860s, Garnet is one of more than 60 ghost towns in Montana and is 30 miles east of Missoula.

Cowboys and Indians in Montana painting by Charlie Russell recreating raucous days of the Old West.

From his studio in Great Falls, Mont., cowboy-artist Charlie Russell’s art captured the action and spirit of the Old West.

In 1877, Chief Joseph of the Nez Perce and his tribal band of 750 evaded U.S. Army troops pursuing them for three months until he was caught and surrendered in northern Montana.

Shooting buffalo from the Kansas-Pacific Railroad.

Looking east from Idaho’s Lake Pend Oreille created by massive flooding during the Last Ice Age, 12,000 years ago when an ice dam broke releasing the water from the huge Glacial Lake Missoula in Montana.

The mammoth Missoula Flood 12,000 years ago at the end of the Ice Age swept from Montana across North Idaho, Washington and Oregon to the Pacific Ocean, carving out the landscape on the way.

Montana is rich with dinosaur excavation sites, including where T. Rex once roamed.

Satellite view of Bering Strait that once was a land bridge route connecting Siberia (on left) with Alaska for ancestors of Native Americans to migrate from Asia to America.

There’s a unique grandeur to Montana. Everything is big — from the towering Rocky Mountains and steaming Yellowstone geysers in the southwest to the wide plains of the north, where great herds of buffalo once roamed — all part of a rich treasure trove of history in-between.

They call it Big Sky Country.

The dinosaurs were there first, millions of years ago, and Montana is a paleontologist paradise for finding fossils — with 13 complete T. Rex skeletons along with countless other ancient animal bones on display in local museums.

During the Late Ice Age about 12,000 years ago, the cataclysmic Missoula Flood thundered across the Northwest from Montana, carving out a new landscape all the way to the Pacific, while around the same time, ancient peoples from Asia walked across a land bridge that once linked Siberia with Alaska where the Bering Strait now lies.

In time, those people migrated all the way to the southern tip of South America, establishing diverse tribes and civilizations along the way.

They’re believed the ancestors of all the indigenous peoples of the Americas — including the American Indians.

The 1800s were busy times for Montana:

Lewis and Clark passed through on the way to the Pacific, mountain men hunted beaver, Chief Joseph surrendered to a pursuing Army, Custer made his “last stand,” vigilantes hanged outlaws, Chinese laborers suffered discrimination and violence, buffalo were slaughtered by the millions, cowboys herded cattle, prospectors paid for drinks with gold, Wild West mining towns boomed and then became ghost towns, while mine and cattle barons flourished — and the railroad brought more civilization.

Big Sky Country used to be Native American Country — until Europeans arrived and moved in and forced them off their ancestral lands, plundered their resources, while decimating their tribes with alcohol, guns and “white man diseases.”

In North America, the purpose was to “civilize the heathen” and bring them Christianity.

Later, it was in the name of Manifest Destiny.

Since about 9000 B.C., bison — mistakenly called buffalo — have been part of the American scene. Montana until the late 1800s had millions of them. The “Great Bison Belt” once extended from Alaska to Florida, according to multiple sources — including the Smithsonian.

The Indians depended on them for food, clothing and other uses.

The great herds were in no danger of extinction until white settlers moved in.

When the railroads were built, it was good sport to shoot buffalo from the trains.

The carnage had a devastating effect on the Indians and their traditional way of life — one of the factors that provoked ongoing Indian Wars that lasted more than 300 years — from 1609 to 1924.

The most famous battle during that period was on June 25 and 26, 1876, at Little Bighorn — an hour’s drive east of Billings, Mont.

The battle was fought on the hilly country next to the Bighorn River and is described by historians as a clash of cultures.

It was Indians with rifles, bows and arrows against U.S. Army weaponry. It would seem that any conflict would favor the Army.

At Little Bighorn it didn’t.

The U.S. 7th Cavalry Regiment led by Lieutenant Colonel George Armstrong Custer was attempting to force Lakota Sioux and Northern Cheyenne Indians onto reservations, but they fought back — joined by the Arapaho.

Other tribes had already agreed to move onto reservations in South Dakota when they signed the Treaty of Fort Laramie six years earlier.

The U.S. Government wanted the tribes to give up their nomadic lifestyle which they said was causing conflict with other Indians, white settlers and the railroads.

“They felt no obligation to conform to its restrictions, or to limit their hunting to the unceded hunting land assigned by the treaty,” says the National Park Service. “Their forays off the set-aside lands brought them into conflict with settlers and enemy tribes outside the treaty boundaries.”

More than 2,000 Indian men, women and children under chiefs Sitting Bull and Crazy Horse were camped at Little Bighorn for a traditional Sun Dance celebration. About 700 of them were warriors.

Custer was planning to capture non-combatants and hold them for ransom until the rest agreed to go to the reservations.

The Cavalry plotted three different attack locations. The Indians knew they were coming.

The Indians swarmed Custer’s band of about 200 on a hilltop, killing all of them — including Custer along with two of his brothers and a brother-in-law — in a battle that lasted only about a half hour.

It was a huge victory for the Indians — with five of the 12 Cavalry companies annihilated.

After the battle, the Army buried their dead and treated the wounded, while the Indians broke up into smaller bands so they could move faster and hunt more effectively. Most spent the rest of the summer hunting in eastern Montana.

Little Bighorn essentially ended the Plains Wars later that year, when the Army trapped 3,000 Sioux at the Tongue River Valley, 65 miles south of Little Bighorn. Most surrendered and returned to the reservations.

But the Indian Wars continued another 50 years.

Also in 1877, an historic Army chase after a band of Nez Perce Indians led by Chief Joseph was taking place to the west.

The Nez Perce in Oregon, Washington and Idaho were also fighting against removal to reservations.

It would end sadly for them in the Montana mountains.

The U.S. Army of 2,000 well-equipped troops chased Chief Joseph’s band of 750 men, women and children for three months in the cold of winter over 1,170 miles — the Indians using remarkably sophisticated tactics in 18 combat encounters while evading capture.

Chief Joseph hoped to join Sitting Bull in Canada, but exhausted, hungry and without blankets, the band was finally trapped at Bear Paw Mountains in northern Montana — 40 miles short of the border.

Sorrowfully, Chief Joseph surrendered and said, “I will fight no more forever.”

There are other dark clouds in Montana history:

A famous outlaw named Henry Plummer, sheriff in Bannack, a frontier mining town in southwest Montana was captured and hanged by vigilantes on gallows he built. He was accused of leading a band of outlaws called The Innocents who robbed gold from prospectors and gold-laden travelers.

Contemporary research says, those charges may have been false.

Another sad chapter in Montana was mistreatment of laborers from China who worked mostly in mining and building the railroads — also in laundries and as domestics. Many sent money back to China to help their families left behind.

During much of the 1800s, because they were willing to work at hard jobs for low wages, and in competition with other workers, the Chinese often faced harassment, violence, murder and racial prejudice.

The U.S. in those times also instituted laws restricting immigrants from Asia and limiting their rights in America.

The gem of Montana of course is Yellowstone — America’s first national park — shared with Wyoming and Idaho.

Its history, magnificent geysers, thermal hot springs, waterfalls, vistas and wildlife make it a natural wonder of the world that hosts four million visitors a year.

Amid all of Montana’s beauty and glory, the ghosts of pastimes still linger. As the sun sets below darkening skies, and the stillness of night sets in, we might hear their voices singing about what once was:

An old cowboy went riding out one dark and windy day

Upon a ridge he rested as he went along his way

Plowing through the ragged skies and up a cloudy draw

It didn’t pay to mess with Mary Fields. They called her Stagecoach Mary, because driving one was her job. She was born into slavery in 1832 and described as a “tart-tongued, gun-toting, hard drinking, cigar and pipe smoking, 6-foot tall, 200-pound black woman who was tough enough to take on any two men.”

The O’Fallon Museum in Baker located in southeast Montana has some unusual things to see: A stuffed steer and his skeleton named Steer Montana that was once the largest living steer, standing nearly 6 feet tall; 10-foot-4 inches long, and weighing 3,980 pounds. Also in the museum are a stuffed two-headed calf, a mannequin display of an early beauty shop permanent wave machine that would sometimes cause scalp burns, and a collection of folk art created by auto body shop owner Herbert Jundt out of wood, stone, metal and auto body resin.

Underneath Yellowstone lies a super-volcano that first erupted 2.1 million years ago, covering more than 5,790 square miles with ash. The last eruption was 70,000 years ago. The next time it happens, there would be worldwide climate change, and pyroclastic hot lava blocks, pumice, ash and volcanic gas inundating Montana, Wyoming and Idaho, with lesser possible impact in 14 other states and parts of Canada and Mexico, according to USGS.

Timothy Egan in his book “Lasso the Wind” quotes Montana cowboy-artist Charlie Russell: "In my book, a pioneer is a man who turned all the grass upside down, strung bob-wire over the dust that was left, poisoned the water, cut down the trees, killed the Indian who owned the land and called it progress."

“The best-kept secret about Montana is the women. They are tough, smart, sexy, and kind-hearted. It’s a lucky guy that ends up with a Montana gal.”

Satellite view of Bering Strait that once was a land bridge route connecting Siberia (on left) with Alaska for ancestors of Native Americans to migrate from Asia to America.

Montana is rich with dinosaur excavation sites, including where T. Rex once roamed.

The mammoth Missoula Flood 12,000 years ago at the end of the Ice Age swept from Montana across North Idaho, Washington and Oregon to the Pacific Ocean, carving out the landscape on the way.

Looking east from Idaho’s Lake Pend Oreille created by massive flooding during the Last Ice Age, 12,000 years ago when an ice dam broke releasing the water from the huge Glacial Lake Missoula in Montana.

Shooting buffalo from the Kansas-Pacific Railroad. 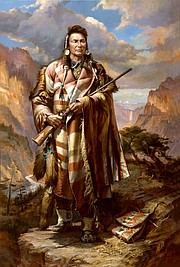 In 1877, Chief Joseph of the Nez Perce and his tribal band of 750 evaded U.S. Army troops pursuing them for three months until he was caught and surrendered in northern Montana.

From his studio in Great Falls, Mont., cowboy-artist Charlie Russell’s art captured the action and spirit of the Old West.

Cowboys and Indians in Montana painting by Charlie Russell recreating raucous days of the Old West.

Once a gold and gemstone mining town from the 1860s, Garnet is one of more than 60 ghost towns in Montana and is 30 miles east of Missoula.