Big Burn 1910 firefighters cooking breakfast at camp, with Pat Grogan wearing an apron, leader of the men who died in the fire at Storm Creek in the Clearwater National Forest.

Aftermath of “wildfire hurricane" in heavy stand of Idaho white pine on the Little North Fork of the St. Joe River, Idaho, in 1910.

Nicholson Mine’s “Pulaski Tunnel” where the heroic forest ranger Ed Pulaski sheltered and saved the lives of 39 firefighters in the 1910 Big Burn in Idaho.

Chicago before the 1871 Great Conflagration.

Wooden 400-foot model of the 1666 London on a barge in the Thames River ready for burning to commemorate the 350th anniversary of the Great Fire of London.

Burning model of Great Fire of London in 1666, set up on a barge in the Thames River to commemorate the 350th anniversary of the fire.

The claim that Roman Emperor Nero “fiddled while Rome burned” in 64 A.D. is not true, because Nero was not in Rome at the time of the great fire that destroyed most of the city, but was 35 miles away at his villa in Actium.

Burning of Rome in 64 A.D. has long been blamed on Emperor Nero.

Burning of the Great Library of Alexandria in 48 A.D., the fire allegedly set by Julius Caesar.

After the destruction of the Royal Library at Alexandria, preserving scholarship grew. After fire destroyed Rome, London, Chicago and San Francisco, those cities were rebuilt better, and after the Big Burn of 1910, the forests grew back stronger than ever.

This is their story.

One of the most famous fires in history was the destruction of the Royal Library at Alexandria in Egypt.

When Demetrius, governor of Athens, fell out of favor, he fled to Egypt and became an adviser to King Ptolemy I Soter who commissioned him to establish the Alexandria Museum in 283 B.C. as a research library for scholars, with more than 100 in residence.

The aim was to amass a collection of knowledge from everywhere. Among the acquisitions were the Septuagint (oldest Greek translation of the Hebrew Old Testament), and writings of Aristotle and Sophocles.

Those writings were scrolls, papyrus, parchment, wax and tablets of stone, wood and clay. Books weren’t invented until the first century A.D. Estimates of how many the Library at Alexandria held vary from 40,000 to 700,000.

The library was part of a larger institution called the Mouseion, dedicated to the Muses — the nine goddesses of the arts.

A branch “daughter” library was set up nearby in the Temple of Serapis.

In 48 A.D., Julius Caesar was in Alexandria with a fleet pursuing Pompey when he was suddenly cut off by an Egyptian fleet. Greek philosopher Plutarch wrote, “When the enemy endeavored to cut off his communication by sea, he was forced to divert that danger by setting fire to his own ships, which, after burning the docks, thence spread on and destroyed the great library.”

Apparently, not all of the library was destroyed. It was rebuilt, more books collected and it lasted about another 250 years.

One of history’s famous fires is best known probably because of the saying: “Nero fiddled while Rome burned.” Even Roman historian Tacitus wrote that Nero said that, but admitted there were no eyewitnesses to confirm it, though he might have seen the city burning in the distance while at his villa in Actium, 35 miles away.

The fire started on July 19 in 64 A.D., fanned by high temperature summer winds. It may have started in a shop selling flammable oil near the Circus Maximus — where chariot races were held.

The blaze lasted nine days. Thousands died and some 200,000 were left homeless.

There were rumors that Nero wanted to rebuild Rome and ordered the fire — hiring thug gangs to prevent people from fighting the fire, under penalty of torture and death.

Nero was quick to place the blame: “Nero also used the fire to clamp down on the growing influence of Christians in Rome,” one report said. “He arrested, tortured and executed hundreds of Christians on the pretext that they had something to do with the fire.”

He started the rebuilding but committed suicide just two years after the fire.

Finally: Nero couldn’t have been fiddling. Fiddles weren’t invented until the 11th century.

As Nero didn’t fiddle while Rome was burning in 64 A.D., neither did the bubonic plague caused by rats end because of the Fire of London in 1666.

The plague that killed 100,000 — almost a quarter of the city’s population — had been dying down since the previous year.

The blaze raged for four days, starting on Sept. 2, caused by a fire in a bakery on Pudding Lane owned by Thomas Farriner, formerly a bread provider for the Royal Navy.

Awakened by the smoke, Farriner, his daughter Hanna and his adult son quickly escaped through the window. Their maid was so frightened she stayed behind and perished.

The flames leapt from house to house — aided by a dry summer wind.

The best ways to fight city fires in those days was to tear down buildings to create fire breaks. London Mayor Sir Thomas Bludworth wouldn’t allow the firefighters to do that.

Soon, everyone was scrambling to save whatever possessions they could and escape into the countryside or into boats on the Thames.

Two days later, the fire was still out of control, so the mayor ordered remaining buildings be blown up with gunpowder.

By the evening of Sept. 6, the fire was out, but not before destroying four-fifths of London — including 13,200 houses and 87 churches, St. Paul's Cathedral, most of the government buildings and 79,000 homes.

Amazingly, only seven deaths were reported — though there may have been more whose remains were lost in the ashes.

A simple-minded French watchmaker named Robert Hubert, who said that he was an agent of the Pope, claimed he started the fire. He was tried and hanged. Then it was discovered that he was on a ship in the North Sea when the fire happened.

Every big fire seems to have a scapegoat. In the Great Chicago Fire of 1871, it was Mrs. O’Leary’s cow.

As the story goes, Catherine “Cate” Donegan O'Leary (born 1827) was an Irish immigrant living in Chicago with her husband Patrick and three children. They lived in an Irish slum neighborhood during the days when the Irish weren’t liked very much.

On the evening of Oct. 8, 1871, she was milking the cow at the family’s barn at 137 DeKoven St., when the cow kicked over an oil lamp that started a fire.

It was dry autumn weather and a wind was blowing.

Most Chicago buildings and much of the sidewalks were made of wood. Rooves were shingles or tar.

The fire raced through it all for two days, and flames formed walls of fire billowing 100 feet into the air.

Fire whirls of scorching hot air hit the cooler air and began spinning “like a hurricane, howling like myriads of evil spirits,” one eyewitness said.

Then, just as the fire was heading north, rain fell — dousing the flames.

The Great Fire had burned much of Central Chicago, killing about 300, with more than 100,000 left homeless.

The cow story was originated by newspaper reporter Michael Ahern, who in 1893 admitted he made it all up. Mrs. O’Leary said she was in bed when the fire started.

The official fire report simply stated: “Whether it originated from a spark blown from a chimney on that windy night, or was set on fire by human agency, we are unable to determine.”

One victim was the famed Palmer House Hotel that burned to the ground 13 days after it opened. It was rebuilt across the street.

At the same time, the more deadly Peshtigo Fire was raging 250 miles north in Wisconsin around Green Bay, killing 1,500 — but it was Chicago that got all the publicity.

At 5:12 a.m. on April 18, 1906, an estimated 7.9 magnitude earthquake hit the coast of Northern California, and the shaking rattled California from Oregon to Los Angeles and inland to central Nevada.

“The hills rolled like great billows and cracked open, houses sank between seven and eight feet in places. All the big cheap lodging houses collapsed with all the people in them.

“Then the fire which started in one hundred places, at once quickly burnt-up the dead and injured. The flames spread like fury…The water mains were all broken, so the fireman had no water to fight the fire with.

“All they could do was to blow up the buildings with dynamite.”

On Aug. 10, hurricane-force winds whipped smaller fires into a huge blazing inferno — making it the biggest forest fire in U.S. history. One-third of the town of Wallace was destroyed. Four thousand federal troops came to help — most of them Buffalo Soldiers.

On that same day, Forest Service ranger Ed Pulaski saved the lives of 39 firefighters by leading them into a mine tunnel — and holding them there at gun-point, lest they be tempted to leave.

He was Idaho’s hero of the Big Burn.

In 2002, the Bibliotheca Alexandrina opened in Alexandria with the intention of making the city a center of world-renowned learning again. It claims to have the world’s largest digital collection of historical manuscripts, and the largest repository of French books on the African continent.

Nero led a life of debauchery, violence, cruelty and murder — killing his own mother and Christians. After the Roman Senate turned against him, he committed suicide in 68 A.D. at age 30.

Londoners didn’t help firefighters much in the 1666 fire. They were too busy saving family and belongings and escaping the fire, fleeing into the countryside or on boats in the Thames. When the Tower of London was threatened, extra fire engines raced to the scene. That’s where the wealthy had their money valuables stored for safekeeping.

Chicago joined by other cities ablaze…

The deadly 1871 Chicago and neighboring Peshtigo fires were not the only ones raging during that time. The dry summer conditions in the region that year also caused devastating fires in Holland, Mich., Port Huron on Lake Huron, Urbana, Ill., and Windsor in Ontario, Canada.

The 1906 San Francisco earthquake that started the fire, awakened Enrico Caruso, whom many consider the greatest operatic tenor of all time. One report said, “He immediately looked out the window and saw a city in ruins — screaming people and collapsing buildings…(then) vacated his hotel quickly, and somehow made his way to the Oakland Ferry.”

Burning of the Great Library of Alexandria in 48 A.D., the fire allegedly set by Julius Caesar. 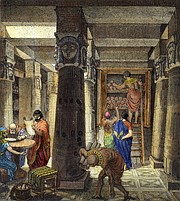 Burning of Rome in 64 A.D. has long been blamed on Emperor Nero.

The claim that Roman Emperor Nero “fiddled while Rome burned” in 64 A.D. is not true, because Nero was not in Rome at the time of the great fire that destroyed most of the city, but was 35 miles away at his villa in Actium.

Burning model of Great Fire of London in 1666, set up on a barge in the Thames River to commemorate the 350th anniversary of the fire.

Wooden 400-foot model of the 1666 London on a barge in the Thames River ready for burning to commemorate the 350th anniversary of the Great Fire of London.

Chicago before the 1871 Great Conflagration.

Nicholson Mine’s “Pulaski Tunnel” where the heroic forest ranger Ed Pulaski sheltered and saved the lives of 39 firefighters in the 1910 Big Burn in Idaho.

Aftermath of “wildfire hurricane" in heavy stand of Idaho white pine on the Little North Fork of the St. Joe River, Idaho, in 1910.

Big Burn 1910 firefighters cooking breakfast at camp, with Pat Grogan wearing an apron, leader of the men who died in the fire at Storm Creek in the Clearwater National Forest.