HISTORY CORNER: History of the Romani

The roots of flamenco music are the Gypsies of Andalusia in Spain, this painting by Alfred Dehodencq depicting Gypsy dancing in gardens of the Alcázar, in front of King Charles V Pavilion (1851).

Badjao ethnic minority called “Sea Gypsies” live in coastal waters in the Philippines, Indonesia and Malaysia, but are not related to the Romani Gypsies originally from India.

Romani such as the Moscow Gypsy Army shown here are famous for their musical talent.

The Romani (Gypsies) migrated from Punjab in northwestern India 1,500 years ago to Europe, and then the rest of the world, though this map indicates later.

For most European Romani, life is still difficult, with 80 percent in Europe facing poverty, according to Eurodiaconia, a Christian based nonprofit operating in 32 countries.

Types of Romani van called “vardos” was a horse, donkey or mule-drawn wagon used as a traveling home — like today’s RV.

Romani in Spain, the earliest arriving in 1425, were subject to Church persecution.

For 1,500 years, the Romani have roamed the world after leaving their homeland in northwestern India — facing persecution almost everywhere they have been. Most call them “Gypsies,” but that’s considered a slur; the preferred term is Romani, Romany, Rom or Roma. In some countries, they are called “Travelers.” The word “Gypsy” came from “Egyptian” because Egypt is where they were wrongly thought to have originated.

The Romani are a colorful ethnic group with a rich culture, bright clothes, jewelry and an itinerant lifestyle of traveling in a wagon called a vardo. They are talented musically, as well as at dancing, acrobatics, metal work, farm labor, anything to do with horses, fortune-telling and a host of other skills.

Unfortunately, they are also said to be good at thievery, sorcery and witchcraft.

Since early times, the Romani have been considered a low-caste people and suffered mistreatment — from being social outcasts, denied the right to pursue certain occupations, enslaved, flogged, branded, tortured, imprisoned, evicted, deported and denied citizenship and civil rights.

Exactly where the Romani (Gypsies) originated has long been debated, with different Roma groups having different claims. Recent DNA studies however have linked diaspora Romani with the original “Gypsies” from India.

A 2012 study in the journal PLOS ONE reported that “Romani populations have a high frequency of a particular Y chromosome and mitochondrial DNA that are only found in populations from South Asia.”

In addition, there are language similarities linking today’s Romani dialects with ancient Sanskrit from the Indian sub-continent. As they migrated, they also picked up words from countries they went through.

Most now agree that they came from India’s northwestern provinces Punjab, Rajasthan and Haryana.

In the Punjabi language, they are called “Gaddi Walla” — denoting wanderers traveling in carts pulled by bullocks, Sanghera said.

“They will stay in one village sometimes up to two or three months, selling door-to-door before moving on to the next village.”

At a conference in India, Jovan Damjanovic, president of the World Roma Organization based in Belgrade, urged the Indian Government “to declare Roms as a national minority of Indian origin” — a step up from simply being nomads existing on the fringes of society.

He also criticized Europe for not doing the same thing.

“European countries have double standards,” he said. “While they welcome refugees from one country, they are treating Roma people in a different way. They are not making a mistake; they are doing it on purpose. All member states of the UN are compelled to host refugees from any country, but for Roma the rules are different.”

The first Romani started leaving India about 1,500 years ago — possibly because of the invasion by Alexander the Great, or by later Afghan general Mahmud of Ghazni early in the 11th century, pushing them into what is now Pakistan, Afghanistan and Iran.

The India Romani split into two groups, one going to Africa and Greece, and the other ending up in Bulgaria, Rumania and Serbia. From there, they migrated to the rest of Europe, Britain and eventually to the U.S. and elsewhere.

Because of the Romani traveling lifestyle, accurate census figures are hard to find. Estimates of worldwide Romani population range from 12 million to 20 million.

Napoleon transported hundreds of Roma men to Louisiana just before selling the Louisiana Territory to the U.S. in 1803.

Almost all Roma in America came from Europe to escape persecution — even from the churches, who were hostile toward them, particularly opposing fortune-telling and occult practices. Today, most Romani have joined churches where they live.

There are several “Gypsy” groups in the U.S. — Rom from Serbia, Russia and Austria-Hungary, first arriving in the 1880s; the Ludar, also called “Rumanian Gypsies;” Romanichal and Travelers from England, Scotland and Ireland; “Black Dutch” from Germany; as well as the Hungarian Gypsies and others.

Most arrived before World War I, with more coming after World War II. Now, they number about a million in the U.S., mostly living in Southern California, the Pacific Northwest, Texas and the Northeast — as well as in Chicago and St. Louis.

Wherever they went, the Romani brought their traditions and culture with them, and one of those gifts is flamenco music — comprised mainly of guitar, song and dance.

Flamenco is believed to have originated in Andalusia by the Spanish Gitano Romani, combining musical elements from India and later adding influences from Spain and the Muslim Moors who lived there for 800 years, and music from Africa.

Today, there are more than 50 styles of flamenco.

When the Ludar arrived mostly from Bosnia, many were animal trainers with bears and monkeys as part of their baggage.

The Romani have a long history of being excellent entertainers.

Their musical talent was noted in the year 430 A.D., when 12,000 Gypsy musicians from India were given as a gift to the Persian King Bahram V. Another account says around 855 A.D., large numbers of them were captured by the Byzantines in Syria, and much admired as great acrobats and jugglers.

But not all reports were complimentary:

Twelfth-century historical records about Constantinople mention the Romani as bear keepers, snake charmers, fortune tellers and sellers of magic amulets “to ward off the evil eye,” warning Greeks to avoid these “ventriloquists and wizards” whom they said were in league with the Devil.

Outside the traditional “Gypsies” are the “Sea Gypsies” — an interesting ethnic minority group of the Philippines, Indonesia and Malaysia who live in houseboats or stilted dwellings built over open coastal waters.

Their entire subsistence is from the sea, making them remarkable fishermen, navigators, deep-sea divers for fish, pearls and other seafood — many are able to hold their breath for five-to-seven minutes and dive to depths of 200 feet.

Diving for more than 1,000 years, the Badjao have developed large spleens — enabling them to stay underwater longer.

“The spleen acts as a warehouse for oxygen-carrying red blood cells,” says The Atlantic magazine. “When mammals hold their breath, the spleen contracts, expelling those cells and boosting oxygen levels by up to 10 percent.”

The Badjao are not related to the Romani.

After a millennium and a half of suffering imposed by much of the rest of the world, the Romani of today are finally beginning to be accepted into conventional society — though not everywhere — but still face problems.

A U.N. report says there are about 12 million Romani in Europe. They form the largest ethnic minority and face multiple problems, including “illiteracy, infant mortality, unemployment and segregation in education, hunger and malnutrition, squalid housing without plumbing or sanitation, substandard health care, and … have the shortest life expectancy in Europe.”

Within their own communities, the Romani hold to close family ties and adhere to their own governance, with their group leaders chosen for life.

Today, most Romani live in houses and apartments, blending in with the rest of the population, but many still do not publicly acknowledge their roots, revealing themselves only to other Romani.

When Peggy Lee sang a song about “Gypsies,” in the 1947 movie “Golden Earrings,” the lyrics bathed them in a kindly light:

There's a story the gypsies know is true

That when your love wears golden earrings,

He belongs to you.

But if you wear those golden earrings,

Love will come to you.

By the burning fire, they will glow with ev'ry coal.

You will hear desire whisper low inside your soul.

So be my gypsy;

And let this pair of golden earrings

The Romani women believe in modesty. They don’t belly dance, though they may move their bellies — but not the hips, because that would be considered immodest. They perform traditional dances wearing flowing skirts — leaving the legs covered for modesty.

Traditional Roma society still arranges marriages between minors as young as 12, according to the BBC. Teenage brides are sometimes bartered and traded between Roma communities — an activity that has alarmed European officials concerned with human trafficking.

Georges Bizet’s famous opera, "Carmen" was first performed in Paris in 1875. It’s the story of Don José, a Spanish soldier who falls in love with a fiery Romani dancer named Carmen. He abandons his childhood sweetheart for her, only to find that Carmen has given her love to another man. In a rage, Don José kills her.

Romani traveling around Switzerland, Hungary, Germany and Spain between 1414 and 1417 carried a document like a passport that was a safe-conduct pass issued by the Holy Roman Emperor Sigismund. Replacing them after Sigismund died, the Romani used safe-conduct letters allegedly from the Pope. They were forgeries.

What’s in a name?

To call them “Gypsies” is derogatory. They have many names, but this minority group is most often called Rom, Roma or Romani — also “Travelers.” They’re called Gitanos in Spain, Gitan or Manush in France, Tsingani in Central and Eastern Europe, and by several names in Scandinavia that translate as “Travelers.” Romani call themselves Kale in Finland and Portugal, and Sinti in Germany and Eastern Europe. 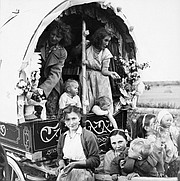 Romani in Spain, the earliest arriving in 1425, were subject to Church persecution.

Types of Romani van called “vardos” was a horse, donkey or mule-drawn wagon used as a traveling home — like today’s RV.

For most European Romani, life is still difficult, with 80 percent in Europe facing poverty, according to Eurodiaconia, a Christian based nonprofit operating in 32 countries.

The Romani (Gypsies) migrated from Punjab in northwestern India 1,500 years ago to Europe, and then the rest of the world, though this map indicates later.

Romani such as the Moscow Gypsy Army shown here are famous for their musical talent.

Badjao ethnic minority called “Sea Gypsies” live in coastal waters in the Philippines, Indonesia and Malaysia, but are not related to the Romani Gypsies originally from India.

The roots of flamenco music are the Gypsies of Andalusia in Spain, this painting by Alfred Dehodencq depicting Gypsy dancing in gardens of the Alcázar, in front of King Charles V Pavilion (1851).