Honeymooners are a big part of the 12 million tourists to Niagara Falls each year.

Annie Edson Taylor, first person to go over Niagara Falls in a barrel and survive, cat in photo went over the falls first in a test run (date unknown).

French tightrope walker Charles Blondin (1824-1897) was first to walk the cable across the Niagara Gorge.

Honeymooners at Niagara Falls in 1901.

Industrial mills on the Niagara River about a half mile upstream from American Falls (c.1900).

Samuel de Champlain (1567-1635), French explorer and founder of Quebec and New France (Canada, Arcadia and Louisiana) never saw Niagara Falls but wrote about it based on Indian accounts — the first European to actually see the falls being Father Louis Hennepin, a Recollect priest from the Spanish Netherlands in the winter of 1678-1679.

This drawing of an Iroquois Indian, who were among the first to populate the Niagara area 12,000 years ago — as the Last Ice Age was ending.

For three days in 1969, U.S. Corps of Engineers diverted the water from the America Falls to study the geologic composition of the falls “to forestall potential destruction.”

The first lighting of Niagara Falls was in 1869, the falls shown here with modern night lights.

Niagara Falls from the American side, Canada’s Horseshoe Falls beyond.

Something didn’t feel right to Jed Porter, a farmer in Western New York taking an evening stroll along the river near Niagara Falls. The thundering sound of the water tumbling over was strangely quiet and the water level had dropped.

As the night wore on, the water flow grew less and less, and around five o’clock the following morning, an employee of Bridgewater Mills on the Canadian side of Niagara Falls woke the owner, Thomas Clark Street, and told him there was no water to power the mill’s waterwheel.

The flow was down to just a trickle, and all the mills were shutting down.

Fish were flapping in the mud and turtles were floundering.

Later that morning, 5,000 people lined the banks to witness what they had never seen before, and as the sun dried out the remaining water, many people made their way down into the riverbed to see what they could find.

And find they did — bayonets, guns, barrels, tomahawks and more — all relics of a bloody battle fought in that area during the War of 1812.

People on horseback and in buggies crossed the Niagara River bed for the only time in history.

U.S. Army cavalry on horseback strutted their stuff up and down the river — just to make a show — and workers from the two-year-old Maid-of-the-Mist tour-boat company dynamited away obstacle rocks on the river floor.

Others were terrified that a Doomsday scenario was about to happen. As anxiety grew throughout the day, thousands packed the churches to pray.

For 30 to 40 hours, the water flowing over the American Falls, and Canada’s Horseshoe Falls, was reduced to a trickle.

Then on the night of March 31, everyone heard “a loud low-pitched growl” coming from upstream “at surprising speed.”

As crowds watched, the river came alive again — as the water rushed in and cascaded over the three Niagara Falls.

“The return of the roar of the falls,” one report said, “reassured the residents that all was going to be all right and that they could now breathe a huge sigh of relief and return to their normal duties.”

Just days earlier, there was a southwest gale blowing off Lake Erie, where the Niagara River begins. All the winter ice on the lake had not yet melted, and the strong winds blew big chunks of ice across the lake, jamming the mouth of the river — stopping the flow.

The history of Niagara Falls goes back 12,500 years to the time when the Ice Age was ending. There’s no historic evidence that this type of natural event ever happened before. And it won’t happen again because in 1964 an ice boom was installed in Lake Erie.

Even though nature hasn’t, civilization has stopped the flow several times since the winter of ‘48. The first was in 1909 and again 1936, and several other times when it dropped to a trickle. The much larger Horseshoe Falls has never stopped.

In 1964, the water was cut off to the American Falls to allow geological studies to be made of the falls' cliffs and determine how to stop cliff erosion and rock slides. The water was diverted by building a 600-foot cofferdam out of 27,000 tons of rock and earth to divert the water to Horseshoe Falls.

One morning five years later, the first scoop of the cofferdam was removed, and by mid-afternoon, the water was flowing once again over the American Falls.

Now back to some early Niagara Falls history leading up to all this:

Louis Hennepin, an early Belgian-born Roman priest in America was so awed by Niagara Falls, that when he returned to Europe, he wrote and published a book about it — and that may have been the start of Niagara’s worldwide fame.

Among the first European celebrities to visit Niagara Falls were Napoleon’s brother, Jerome, and his bride, Elizabeth. They were the first Niagara honeymooners — though sadly, the marriage didn’t work out for them, and was annulled two years later.

Just west of Niagara Falls lies Lundy’s Lane in Canada not far from where the Niagara River flows into Lake Ontario (and from there to the St. Lawrence River and into the Atlantic). It’s the site of one of the bloodiest battles of the War of 1812. It was also where the Treaty of Ghent was signed two years later, bringing peace between the U.S. and Great Britain.

There were 1,731 casualties, with 256 killed, but the result of the battle was inconclusive.

In 1825, the ritzy Cataract Hotel opened in Niagara and Abraham Lincoln stayed there — long before he was president.

In those days, they’d already developed railroad service between Buffalo and Niagara Falls — but the rail cars were drawn by horses.

But it wasn’t the celebrities that made Niagara boom — it was the genius electrical engineer Nikola Tesla from Croatia, who introduced alternating current (AC) electricity to the area — like we use today.

Under the earlier direct current (DC), power could only travel about 100 yards, but distance isn’t a problem with AC.

In 1895, Tesla built the world’s first hydro-electric power plant in Niagara Falls, running power from the falls to Buffalo — and the rest is history.

Niagara Falls has long been a drawcard for daredevils.

In 1859, a Frenchman Charles Blondin, just 5 feet tall, became the first to walk across Niagara Falls on a tightrope. The betting was heavily against him making it. He’d been practicing tightrope walking (funambulism) since he was a kid and did make it — as thousands on both sides of the border watched.

He repeated it possibly 300 times, weaving in daredevil maneuvers while walking the cables — sometimes backward, or carrying someone on his back.

(The cables were anchored every 20 feet with wires to prevent swaying.)

His most famous stunt was carrying a stove and utensils on his back to the middle of the cable, then firing up the stove, cooking an omelet and lowering it to feed passengers on the Maid-of-the-Mist tour-boat below.

The first woman daredevil was Annie Edson Taylor, a school-teacher born in Auburn, N.Y., in 1838, who at age 63 built a barrel out of wood and steel and lined it with a mattress, planning to ride in it over the American Falls. First, however, she sent it over with her cat in it as a test.

The cat survived, and Annie was next.

She survived too, but sadly never became very famous in doing it, and died penniless and nearly blind in 1921.

In recent times, daredevil Nik Wallenda became the first to actually tightrope walk across Niagara Falls from the U.S. to Canada. He did it in 25 minutes under dangerous conditions in 2012, as millions watched as ground spectators and on TV around the world.

“The mist was so thick, so challenging, those winds hit me from every direction,” he said. “There was no way to focus on the movement of the cable. If I looked down at the cable there was water moving everywhere. And if I looked up there was heavy mist blowing in front of my face. So, it was a very unique — a weird sensation.”

In the negotiations with the U.S. and Canadian government for permission to make the walk, he was approved but forced to wear a safety harness for the first time in his life.

He didn’t need it.

In 1990, Jesse Sharp, and experienced canoer from Ocoee, Fla., had a dream of going over Niagara Falls in a decked kayak. He told a Buffalo News reporter that he believed he could do it by propelling his light craft far enough out over the falls to avoid the crushing water.

Pursuing his dream, he tried it — and was never seen again.

Time is taking its toll on Niagara Falls. The entire gorge between Lake Erie and Lake Ontario is slowly eroding, with soft rock layers underneath washing away and rocks breaking off.

It’s all expected to happen over the next 50,000 years — so visitors and honeymooners are encouraged to make their plans to see it before it’s all gone.

Niagara Falls is actually three falls on the border between the U.S. and Canada: Horseshoe Falls (the largest) in Ontario, Canada, and American Falls and Bridal Veil Fall in New York, 20 minutes’ drive north of Buffalo. Goat Island separates Horseshoe Falls and the American Falls, while Luna Island separates Bridal Veil from the other two waterfalls.

Twelve million tourists visit the falls every year. Visitors on the Canadian side can see colored night lights dazzling both big falls from Queen Victoria Park, and tourists on the American side can view the waterfalls from Prospect Point Park.

The brown foam below Niagara Falls is a natural result of tons of water plummeting into the depths below. It is not dangerous. The brown color is clay, which contains suspended particles of decayed vegetative matter. It is mostly from the shallow eastern basin of Lake Erie.

Do fish go over Niagara Falls?

Fish do go over Niagara Falls, but survive far better than people do, because they don’t have to worry about breathing and their lightweight pliable bodies can better withstand the 188-foot plunge. Most of those fish are Chinook and Coho Salmon, Smallmouth Bass, White Bass, Carp, Rainbow Trout, Lake Trout, Catfish, Muskellunge, Northern Pike and Yellow Perch.

No more barrel stunts at Niagara…

After Annie Taylor’s successful trip over the American Falls in 1901, both the U.S. and Canada passed laws making it illegal to ride over Niagara Falls in a barrel, with violators subject to “heavy charges and a fine."

Niagara Falls from the American side, Canada’s Horseshoe Falls beyond.

The first lighting of Niagara Falls was in 1869, the falls shown here with modern night lights.

For three days in 1969, U.S. Corps of Engineers diverted the water from the America Falls to study the geologic composition of the falls “to forestall potential destruction.”

This drawing of an Iroquois Indian, who were among the first to populate the Niagara area 12,000 years ago — as the Last Ice Age was ending. 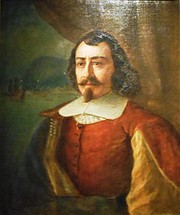 Samuel de Champlain (1567-1635), French explorer and founder of Quebec and New France (Canada, Arcadia and Louisiana) never saw Niagara Falls but wrote about it based on Indian accounts — the first European to actually see the falls being Father Louis Hennepin, a Recollect priest from the Spanish Netherlands in the winter of 1678-1679.

Industrial mills on the Niagara River about a half mile upstream from American Falls (c.1900).

Honeymooners at Niagara Falls in 1901. 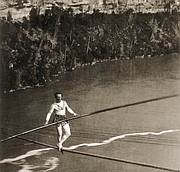 French tightrope walker Charles Blondin (1824-1897) was first to walk the cable across the Niagara Gorge. 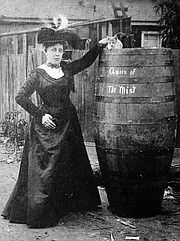 Annie Edson Taylor, first person to go over Niagara Falls in a barrel and survive, cat in photo went over the falls first in a test run (date unknown). 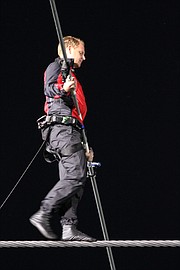 Honeymooners are a big part of the 12 million tourists to Niagara Falls each year.