Carol Cook, left, with Maggie, and Sharon Philliber with Molly, walk with the rest of the Coeur d'Alene Dog Fanciers in the 29th annual Lighting Ceremony Parade Friday night on Sherman Avenue.

“The kids love the parade,” said Sam Symons of Coeur d’Alene. “We always come in for the kids.”

Last year’s ceremony had to be canceled due to COVID-19, so people were extra ready to celebrate the start of the holidays.

Kids shouted “Merry Christmas” and waved with smiles upon their faces.

The year’s theme was Holiday Heroes and Festive Figures sponsored by Idaho Central Credit Union with 30 entries from floats to a marching band to dancers to horses.

“It was fabulous,” said Verna Curry of Athol, part of the Red Hot Mamas who danced their way down Sherman Avenue. “You see the smiles of the kids and you hear the laughter and that's exactly what Christmas is about.”

Curry was decked out in a Christmas costume complete with blinking Christmas lights and a walker.

“They call me Mrs. Claus,” Curry said laughing. “The best part of it for me is what I receive, the love and the laughter and the appreciation and that's what fuels my energy.”

After the parade, people flocked to The Coeur d’Alene Resort lawn for carols and a fireworks display, compliments of the Hagadone Corporation.

The shouts quieted down as the crowd sang "Silent Night," candles in hand.

With 3,400 effects throughout, Hagadone Corporation CEO and chairman Brad Hagadone said the fireworks would be so big this year that the late Duane Hagadone would hear them from Heaven.

Duane B. Hagadone, the founder of The Hagadone Corporation, passed away on April 24, and son Brad Hagadone said the year’s show had a little extra magic to celebrate his life.

After the fireworks, the switch was flipped and over 1.5 million lights brightened downtown to complete the Christmas picture, with icons such as Santa Claus and Rudolph.

This year’s guest of honor to lead the light switch countdown was Lori Lougheed, an almost 40 year employee of the Hagadone Corporation.

“This special event not only represents the kick-off to the holidays, but also displays the sense of togetherness our lakeside town encompasses," she said.

Allison Benton of California, who came up to the area to visit family, said it was a fantastic celebration.

“The whole shebang, everyone being out here too, was just awesome," she said.

Carol Cook, left, with Maggie, and Sharon Philliber with Molly, walk with the rest of the Coeur d'Alene Dog Fanciers in the 29th annual Lighting Ceremony Parade Friday night on Sherman Avenue. 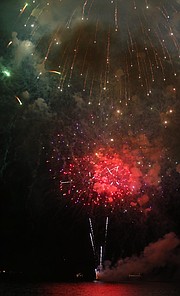