Hernán Cortés battling Aztecs, defeating them after a three-month battle to capture the Aztec capital of Tenochtitlán.

Illustration depicting Tenochtitlan, capital of Aztec Empire captured by Hernán Cortés resulting in the end of the Aztecs after conquistador occupation from 1519 to 1521.

After arriving in Mexico in 1519 with 11 ships and 400 men, Hernán Cortés burned all but one of his ships to stop his men from turning back, the surviving ship being returned to Spain (though another report says the ships were disassembled to build ships for use on Lake Texcoco to take over the Aztec capital).

Hernán Cortés tortured Aztec emperor Cuauhtémoc to reveal the location of hidden Aztec wealth, which he refused to do and was hanged — his stoicism becoming legendary.

Armed with guns and cavalry which the Aztecs didn’t have, Hernán Cortés and his soldiers defeated them, ending the Aztec Empire c.1521.

Altar of the Toads, Aztec symbols of water in ruins of Templo Mayor in the heart of Mexico City, where the Aztec capital Tenochtitlan was once located.

A bold young man from a small Spanish village with a thirst for adventure journeyed to the New World in 1504 and faced the Aztecs, an ancient and highly developed nation of fierce warriors, rich in architectural achievement, jewels, silver and gold — but no match against guns, horses and smallpox.

His name was Hernán Cortés.

He lived in the Renaissance Age — a time of “rebirth” in culture, art, philosophy, literature, politics, economics ... and global exploration and trade.

In the forefront of exploration and trade were the Spanish conquistadors — competing against other European powers. The first was Columbus, and Cortés yearned to be part of it. A mundane life in Spain wasn’t for him.

He was born in Medellin in Castile, Spain, in 1485, into a lower nobility family. His name was Hernán Cortés Monroy Pizarro Altamirano (a distant cousin of the notorious Francisco Pizzaro who plundered the Incas in Peru); his father a military officer.

Biographical reports say at 14 he was “very intelligent and clever in everything he did … ruthless, haughty, mischievous, and quarrelsome … a source of trouble to his parents … (and) “much given to women.”

He studied Latin and law for a while but soon was bored with it.

His life of adventure began when at age 19 he sailed to Hispaniola (now Haiti and Dominican Republic), where the governor was a family friend.

There, he found a job as a notary, was given a land grant and a number of natives to work the fields. He also joined the Spanish militia and became an accomplished soldier — helping subjugate rebellious locals.

Among those rebels was a Taino chieftain named Hatuey who tried unsuccessfully to incite the Taino in both Hispaniola and Cuba to fight the Spanish overlords. Showing a basketful of gold and jewels, he told the Taino:

“Here is the God the Spaniards worship. For these they fight and kill; for these they persecute us and that is why we have to throw them into the sea ... They tell us, these tyrants, that they adore a God of peace and equality, and yet they usurp our land and make us their slaves.

“They speak to us of an immortal soul and of their eternal rewards and punishments, and yet they rob our belongings, seduce our women, violate our daughters. Incapable of matching us in valor, these cowards cover themselves with iron that our weapons cannot break.”

The Spaniard eventually caught Hatuey and tied him to a stake. Before burning him, he was asked if he would accept Jesus and go to heaven. When told there were Spaniards in heaven too, he said he’d rather be in hell.

Then they lit the fire.

Cortés was part of it.

Cortés quickly became admired by the Spaniards as a tough fighter, and a good leader and administrator. That caught the eye of Diego Velázquez, the island’s colonial administrator under the governor.

Velázquez was planning an invasion of Cuba to colonize the island, and selected Cortés as clerk to the treasurer of the expedition, responsible for the Spanish Crown receiving its customary one-fifth of the profits.

It would prove a career step up for Cortés, but it unfolded a dark chapter in Spanish history in the New World.

Velázquez left Hispaniola for Cuba in 1513 with three ships and 300 men and within four years had subjugated the local population. New settlements were built, including today’s Santiago — where Cortés was appointed mayor and given land and slaves.

For the indigenous living there, it was a reign of terror. Conquistador cruelties are unpublishable.

Velázquez was made governor of Cuba and Cortés raised cattle. Then the next conquistador target was Yucatan. A rift had developed between Velázquez and Cortés over a complex number of issues, but nevertheless, Cortés was given command of an expedition to explore and secure the interior of Mexico for colonization.

He immediately began organizing ships, men, weapons, materials and money for the assignment. Then Velázquez had second thoughts about Cortés, who was ready to go and withdrew his appointment.

Cortés ignored the cancellation and left for Mexico with 11 ships, 500 men (including seasoned slaves), 13 horses, guns, crossbows and cannons.

He landed in Mayan Yucatan in March 1519 and met Geronimo de Aguilar, a Spanish Franciscan priest who spoke the Chontal Maya language and became interpreter for Cortés — helping him learn about the area and its peoples.

Cortés then claimed the land for Spain.

The Aztecs under Montezuma were the dominant force in the region and all others were their vassals — most unwilling.

Cortés managed to recruit many of them into his army to face the Aztecs and destroy their empire.

He scuttled his ships so there would be no turning back by his men, and then headed for the Aztec capital, recruiting allies along the way.

At Tabasco, he encountered resistance but won the battle and was presented 20 young native women. One of them was La Malinche — later called Doña Marina.

Malinche knew both the Nahuatl and Chontal Maya languages and quickly learned Spanish. She played a major role in the conquest of Mexico as interpreter — and also became Cortés’ mistress and bore him a son, Martin, now believed to have been the first mestizo.

On Nov. 8, 1519, Cortés, Malinche and a large army arrived at the fabulous Aztec capital city of Tenochtitlan, built on an island in Texcoco Lake, now Mexico City.

They were peacefully received by Moctezuma II, who hoped to crush them later.

Cortés was lavished with gifts of gold — which only further excited the Spaniards for plunder. Two weeks later, Cortés took Montezuma as a hostage in his palace, indirectly ruling Tenochtitlán through him.

Cortés left 200 men in Tenochtitlán, with Pedro de Alvarado in charge and headed for the east coast to deal with Narváez.

He won the battle and convinced most of enemy to join him, promising them great wealth.

When he returned to Tenochtitlan, he faced chaos due to mismanagement by Alvarado who ordered his troops to attack an unarmed crowd that he later claimed was using a celebration to cover up an attack.

The June 1520 massacre known as the Noche Triste (the sorrowful night), resulted in the death of about 400 Spaniards, 4,000 native allies and many horses.

Fighting ensued between the Cortés army and the Aztecs, forcing the Spaniards to flee — many drowning in the lake because of the weight of gold they were trying to take with them.

A year later, the Spanish aided by Tlaxcalans and reinforcements were back and found the Aztecs weakened by famine and an epidemic of smallpox.

With superior weapons and cavalry, the Spaniards soundly defeated them, and shortly thereafter, the Aztec Empire came to an end.

Spain continued to rule Mexico until Mexican independence in 1821.

Moctezuma was killed — either by being stoned by his own people for failing to deal effectively with the Spaniards, or by being executed by Cortés.

Those were times when brutality was commonplace — especially when looking for new lands to take and gold and silver to plunder.

In researching who the cruelest conquistador was, the answers are mixed, but Hernán Cortés has the most nominations. Statistics on such matters are questionable, but he’s said to have caused the death of 100,000 mostly indigenous people in the New World.

He may also have murdered his first wife, Catalina Suárez — a relative of Diego Velázquez — who had joined him in Cuba. They had no children. She died under mysterious circumstances, and reports say it may have been because she lacked social nobility — not being a Doña, and therefore was of no use in furthering her husband’s ambitions.

In 1529, Cortés married his second wife — a Spanish noblewoman, Juana de Zúñiga and they had three children. He eventually became a marquis, securing the high social status he long had craved.

In his quest for adventure, Cortés (or Cortéz) had goals of appropriating new lands for the Spanish crown, converting native inhabitants to Catholicism, and plundering for gold and riches.

He achieved all those goals — and earned a tarnished place in history.

The Aztec language, Nahuatl, was the dominant language in central Mexico by the mid-1350s. Numerous Nahuatl words borrowed by the Spanish were later absorbed into English as well, including chile or chili, avocado, chocolate, coyote, peyote, guacamole, ocelot and mescal.

Each year, the Aztecs sacrificed about one percent of the population, or a quarter of a million people to their gods. During the grand opening of the great pyramid of Tenochtitlan in 1487, 84,000 people were sacrificed in four days.

"I and my companions suffer from a disease of the heart which can be cured only with gold."

Mexico City sits on the site of the fabulous Aztec capital city of Tenochtitlan, built on an island in what once was 500-foot deep Lake Texcoco. The Spanish later drained most of the lake to control flooding, but total draining was not completed until 1967. Today, Mexico City suffers from a lack of water.

Lake Texcoco is best known as where the Aztecs built the city of Tenochtitlan, which was located on an island within the lake. After the Spanish conquest of the Aztec Empire, efforts to control flooding by the Spanish led to most of the lake being drained. The entire lake basin is now almost completely occupied by Mexico City, the capital of the present-day nation of Mexico. 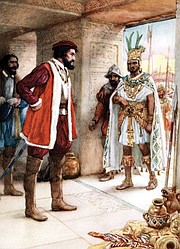 Hernán Cortés battling Aztecs, defeating them after a three-month battle to capture the Aztec capital of Tenochtitlán. 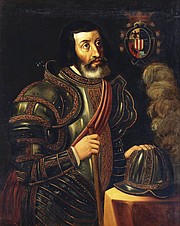 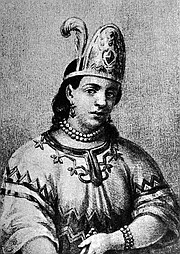 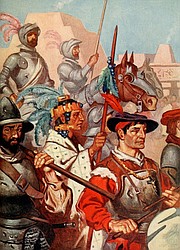 Illustration depicting Tenochtitlan, capital of Aztec Empire captured by Hernán Cortés resulting in the end of the Aztecs after conquistador occupation from 1519 to 1521.

After arriving in Mexico in 1519 with 11 ships and 400 men, Hernán Cortés burned all but one of his ships to stop his men from turning back, the surviving ship being returned to Spain (though another report says the ships were disassembled to build ships for use on Lake Texcoco to take over the Aztec capital).

Hernán Cortés tortured Aztec emperor Cuauhtémoc to reveal the location of hidden Aztec wealth, which he refused to do and was hanged — his stoicism becoming legendary.

Armed with guns and cavalry which the Aztecs didn’t have, Hernán Cortés and his soldiers defeated them, ending the Aztec Empire c.1521.

Altar of the Toads, Aztec symbols of water in ruins of Templo Mayor in the heart of Mexico City, where the Aztec capital Tenochtitlan was once located.