The Seawolf Class of submarines are super-stars of the U.S. Navy, carrying torpedoes and intercontinental missiles.

Captured World War II German U-boats outside their pen at Trondheim in Norway (May 19, 1945).

The RMS Lusitania shown in this panorama photo was taken in New York just before leaving on return voyage to Britain that ended in being torpedoed by a German U-boat 11 miles off the south coast of Ireland.

The Confederacy used the small hand-powered submarine CSS H.L. Hunley during the Civil War, to sink the Union sloop-of-war USS Housatonic in Charleston Harbor in 1864, before also sinking and killing all crewmembers.

Full-size mockup of Bushnell "Turtle," a one-man submarine and the world's first military submarine used in action, on display at the U.S. Navy Submarine Force Museum and Library in Groton, Conn.

Submarine invented by Dutchman Cornelis Drebbel was demonstrated on the Thames in London, possibly with King James I on board the third prototype.

Jules Verne’s “Nautilus” submarine in “Twenty Thousand Leagues Under the Sea,” a fiction adventure first appearing as a French magazine serial in 1869, was ahead of its time in submarine technology.

"Of all the branches of men in the forces there is none which shows more devotion and faces grimmer perils than the submariners." — Winston Churchill

It’s hard to believe that King James I of England not only commissioned a team of scholars to create the King James Bible, and also a brilliant Dutch inventor and engineer who would invent the submarine.

His name was Cornelis Drebbel, a talented inventor, engineer, engraver and glassworker from the medieval city of Alkmaar, 25 miles northwest of Amsterdam.

His talents brought him fame that reached the ears of King James who in 1604 invited him to move to England with his wife and children. He accepted and the family was housed in an elegant home and he became a member of the royal court.

He dazzled everyone when he invented a perpetual motion machine mounted on pillars that was actuated by changes in atmospheric pressure and temperature. It could tell the time, date and season. Reports say he also knew a great deal about alchemy and fireworks.

During his time with King James, he invented a wooden submarine that could travel at a depth of 12 to 15 feet, with air hoses to the surface attached to floats. Two rowers powered the craft, with the oar holes through the hull covered with greased leather seals to keep the water out.

They rowed the submarine some seven miles up the Thames from Westminster to Greenwich.

Drebbel built three models of different sizes and demonstrated them to the Royal Navy, but they weren’t interested.

Several accounts say that King James took a ride in the third boat.

When the King died, his successor Charles the First wasn’t interested in submarines and ordered Drebbel to invent ways to attack enemy ships.

The “Father of Submarines” fell out of favor with the court and spent his final years as a pub owner in London before dying at age 61.

In the centuries that followed, interest in submarines fascinated a host of inventors.

During the American Revolution (1775-1783) David Bushnell of Connecticut was a student at Yale and got the idea of using water as a ballast for buoyancy control in an underwater ship that would be propelled by a screw propeller — so he built a one-man sub that he called “Turtle” because it looked like one.

Foot pedals like on a bicycle were used to power the craft.

He also figured out that gunpowder could be exploded underwater if encased in a mine or torpedo, and detonated by contact or a timing device.

That meant submarines could be used in combat.

He made his components with the help of Isaac Doolittle, a wealthy New Haven inventor, clock-maker and brass foundryman.

The plan was to approach an enemy ship underwater, drill a hole in the hull and attach the explosive armed with a timer.

Bushnell joined George Washington’s Continental Army and they put the Turtle to the test against the 64-gun British warship HMS Eagle, anchored in New York Harbor.

The attack failed, but other inventors took the idea from there.

After the war, Bushnell moved to France and might have worked with Robert Fulton, another American inventor, who was designing a submarine for the French.

Fulton was there in turbulent times. The French Revolution was ending and Napoleon Bonaparte was about to take charge of France and there was a war going on with Britain and its allies.

He pitched the French on the submarine idea, using the same tactics that Bushnell proposed.

The French rejected the idea, saying it was “an atrocious and dishonorable way to fight.”

In 1800, Fulton built his “Nautilus” anyway — at his own expense — and held trials on the Seine. The French authorized him to try it out on two British ships, but it failed because the Nautilus was too slow and the ships just moved out of the way.

Then Fulton shifted to steamboats.

Submarine technology began having some operational success during the Civil War.

The goal of the Confederate subs was to sink Union ships and break their blockade of the South. The Union was more interested in using submarines to remove underwater obstructions.

Horace Lawson Hunley (1823-1863) was a Confederate marine engineer during the Civil War who developed early hand-powered submarines, the most famous one being named after him posthumously — the CSS H. L. Hunley.

In February 1864, the Hunley sank the Union sloop-of-war Housatonic in Charleston Harbor, but in the attack, it also sank, killing all eight on board — including Hunley.

The Hunley wreck was found in 1995, and raised and restored five years later.

By the time French novelist Jules Verne wrote his classic “20,000 Leagues Under the Seas” shortly after the Civil War, submarines had proven to be viable vehicles for warfare and underwater exploration.

Already inspired were navies around the world.

In World War I, Germany’s plan to take over Europe was countered by Britain blockading the North Sea and English Channel — cutting off the supply of war supplies, food and fuel that the Germans needed, while starving the British.

Germany retaliated by using submarines to attack any ships supplying the U.K. and its allies. That include the United States that remained neutral until 1917 — three years after the war started.

The most famous attack was by Germany’s U-20 submarine (“U” standing for “Unterseeboote”) torpedoing the British four-stack passenger liner RMS Lusitania.

On May 7, 1915, the liner with nearly 2,000 on board was returning to England from a roundtrip voyage to New York. At 2:12 p.m. when sailing 11 miles off the south coast of Ireland, Walther Schwieger, commander of the U-20 ordered the launching of one torpedo that hit the starboard bow. Then there was another explosion — probably a boiler blowing up.

Crew members were only able to launch six of the 48 lifeboats. Passengers and crew were jumping into the frigid sea. Eighteen minutes later the Lusitania sank out of sight in 300 feet of water.

President Woodrow Wilson and most Americans wanted to stay out of the war, but sinking the Lusitania and other American ships began changing that stance, and on April 6, 1917, the United States declared war on Germany and its allies.

German submarines helped bring it on.

In World War II, 263 U.S. Navy submarines patrolled the seas, sinking 1,392 ships during the war — destroying 30 percent of the Imperial Japanese Navy and nearly 55 percent of all their shipping in the Pacific.

Of the U-boats, 519 were sunk by British, Canadian, or other allies, while 175 were destroyed by American forces. Fifteen were destroyed by the Soviets and 73 subs were scuttled by their crews before the end of the war.

According to the U.S. Office of Naval Intelligence, “Beijing’s undersea fleet by 2030 could expand to include 60 diesel-electric boats and at least 16 nuclear attack submarines.”

Now the U.S. is building armed drone submarines that will be strategically moored under the sea awaiting the command to attack enemy targets.

After centuries of development, we have incredible submarines for peace and war — but now we’re developing the technology to destroy them.

What would Jules Verne think?

It’s interesting how the futuristic adventures and gadgetry that we learned about from the old comic strips like Buck Rogers, Superman and Dick Tracey are no longer fantasy — but are an accepted part of everyday life. Did William Shatner in "Star Trek" ever dream he’d really go into outer space?

With today’s sophisticated submarine technology, deep sea tourism is just around the corner.

Robert Fulton was the son of Irish immigrants, whose father died when he was boy, so he taught himself to read and write. Then at age 8, he was sent to a Quaker school. The world remembers him as inventor of the steamboat — but he also had other talents. As an apprentice to a Philadelphia jewelry shop, he learned to paint miniatures on ivory for lockets and rings — and had a charming personality.

The Japanese built two-man mini-subs during World War II, carried piggy-back on submarines and launched near their targets. During the Pearl Harbor attack, a Japanese “Midget Submarine C” was supposed to enter the harbor and attack the American ships with two torpedoes. They failed however because of navigational difficulties, ran aground and were captured.

On Aug. 3, 1958, U.S. nuclear submarine Nautilus completed the first undersea voyage to the geographic North Pole. The historic voyage started when the Nautilus dived at Point Barrow, Alaska, and then traveled under the Arctic ice cap nearly 1,000 miles to reach the top of the world. Then it continued to Iceland — having pioneered a new and shorter route from the Pacific to the Atlantic and Europe.

Yes. Each sub carries up to eight missiles on board, and each missile carries up to five nuclear bombs — each bomb eight times more powerful than the Hiroshima atomic bomb.

The U.S. Navy’s Virginia class nuclear-powered cruise missile fast-attack submarines are the latest and incorporate the most sophisticated stealth, intelligence gathering, and weapons systems technology. They are designed for open sea and near-coast operations that include anti-submarine warfare and intelligence gathering — and are expected to remain in service up to 2070. 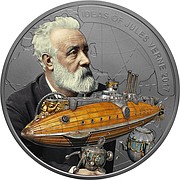 Jules Verne’s “Nautilus” submarine in “Twenty Thousand Leagues Under the Sea,” a fiction adventure first appearing as a French magazine serial in 1869, was ahead of its time in submarine technology.

Submarine invented by Dutchman Cornelis Drebbel was demonstrated on the Thames in London, possibly with King James I on board the third prototype. 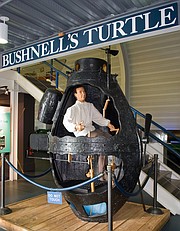 Full-size mockup of Bushnell "Turtle," a one-man submarine and the world's first military submarine used in action, on display at the U.S. Navy Submarine Force Museum and Library in Groton, Conn.

The Confederacy used the small hand-powered submarine CSS H.L. Hunley during the Civil War, to sink the Union sloop-of-war USS Housatonic in Charleston Harbor in 1864, before also sinking and killing all crewmembers.

The RMS Lusitania shown in this panorama photo was taken in New York just before leaving on return voyage to Britain that ended in being torpedoed by a German U-boat 11 miles off the south coast of Ireland. 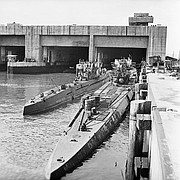 Captured World War II German U-boats outside their pen at Trondheim in Norway (May 19, 1945).

The Seawolf Class of submarines are super-stars of the U.S. Navy, carrying torpedoes and intercontinental missiles.