Modern rendition of ancient Egyptian gods worshipped at the time the Coptic Church was founded by Mark the Evangelist c.40s to 60s A.D.

Coptic Christians, frequent targets of religious tensions in Egypt and elsewhere since ancient times, are about 10 percent of Egypt’s population of 100 million (estimate reports vary).

Egyptian Coptic Christians have long been in danger of persecution that includes violence, burning of their churches and martyrdom.

Mosaic in Coptic Orthodox Cathedral in Cairo, Egypt, dedicated to St. Mark, depicting his martyrdom by being dragged to death through the streets of Cairo by Roman soldiers in 68 A.D. because of his witness for Christ.

Beheading by ISIS of 21 kidnapped Coptic Christians in Libya near Tripoli, 20 from Egypt, one from Ghana, because they refused to renounce their faith (2014).

What a joy it must have been for the Alexandrians in Egypt when Mark came to town to talk about a Jew named Jesus and all the things He did — giving a message of hope that was good news at a time when life on Earth was filled with toil and danger.

The Christian Church had already started in Jerusalem after Christ, and was expanded when Mark went to Alexandria and founded the Coptic Orthodox Church around 42 A.D., challenging the pagan, polytheistic religion of the Pharaohs that was thousands of years old.

Coptic Christians believe that Christ is perfect in His divinity, and perfect in His humanity, and that both are united in one nature — the “nature of the incarnate word” — as explained by Saint Cyril of Alexandria.

Defined by the church at an early stage, that belief is called “monophytism” — a belief that Jesus Christ has only one nature, and that His divine nature and human nature “are composite and totally united,” as opposed to two natures united in one person.

Copts believe that the single nature was formed “from the first moment of Holy Pregnancy in the Virgin's womb.”

Mark only stayed in Alexandria for a short time on that first trip, but his work paid off after he returned to build his church 20 years later.

Within half a century the Copts had replaced the pantheon of more than 2,000 pagan deities, making Egypt a primarily Christian nation for hundreds of years.

This was 600 years before Islam, while Egypt was ruled by the Romans, who generally tolerated other religions — but not always. A number of Roman emperors attempted to force their subjects to worship Roman gods and the Emperor.

Around the time Mark was building a church in Alexandria, Roman Emperor Claudius was engaged in a campaign to restore Roman pagan religious rites and suppress foreign cults — especially Jews and Christians.

When Nero burned Rome in 64 A.D., he blamed the Christians, and some were put to the torch.

“Nero punished a race of men who were hated for their evil practices,” Roman historian Tacitus wrote. “These men were called Christians. He got a number of people to confess. On their evidence a number of Christians were convicted and put to death with dreadful cruelty.

“Some were covered with the skins of wild beasts and left to be eaten by dogs. Others were nailed to the cross. Many were burned alive and set on fire to serve as torches at night.”

Later emperors fed Christians to the lions in the Coliseum — but not as many as Hollywood would portray.

Modern scholarship believes not more than a few thousand were killed during the hundreds of years from Christ to the collapse of the Ancient Roman Empire in the 5th century A.D.

After Nero, more Roman emperors were draconian toward the Christians.

In the 4th century, Emperor Diocletian issued the Edict Against Christians, and soon churches and Scriptures were burned, followed by tortures and executions of Christians.

The emperor Trajan made Christianity a crime, and Pliny the Younger, a Roman magistrate, admitted in letters that though Christians in his district had committed no illegal acts, with the Emperor’s approval he had “put persons to death, though they were guilty of no crime, and without the authority of any law.”

There were more Roman emperors who also committed atrocities against Christians.

The number of martyrdoms that ensued is legion.

Roman persecution of Christians pretty much ended after Constantine became emperor and made Christianity legal in 313 A.D. with the Edict of Milan.

In 380 A.D., Emperor Theodosius issued the Edict of Thessalonica, making Christianity the official religion of the Roman Empire.

Mark returned to Alexandria some 20 years after his first visit and started the Coptic Church. Ever since then, Copts have been persecuted and many killed — including Mark.

After the Romans, the Byzantines continued the persecution.

Among the many martyrs during their reign of terror, was Bishop Anthimus of Nicomedia — who was decapitated.

They were followed by Islam persecution that started after 610 A.D., when Muhammad said the angel Gabriel told him to write the Koran.

There’s been a clash of cultures ever since, and the treatment of the Coptic Christians has ranged from tolerance to open persecution.

“Violence has been an ever-present threat, even if the occurrence of violence has varied in intensity under different administrations,” says CSW, a human rights organization in the U.K., reporting on recent attacks in Egypt. “Persecution such as this is not only a political problem, but a cultural and societal one, deeply entrenched in the psyche of the nation.”

The fourth time those early Christian denominations came together was at the Council of Chalcedon in 451 A.D. in Bithynia, located in modern day Turkey.

The meeting — attended by 520 bishops or their representatives — was called by Marcian, Roman Emperor of the East, to resolve a conflict of the interpretation of the nature of Jesus.

By then, the Coptic (Egyptian) Orthodox Church of Alexandria had developed other branches, forming the Oriental Orthodox Churches that today include the Armenian, Syrian, Ethiopian, Eritrean and the Malankara Indian Churches.

The debate at Chalcedon was over certain heresies that had arisen attempting to separate Christ’s divine nature from His humanity — limiting Christ’s nature as solely divine.

The Copts attending Chalcedon believed that the Council had it wrong, and broke away, along with several others.

Copts today say, “The Oriental churches were wrongly accused (at Chalcedon) of believing in monophysis (a single nature of Christ), which is not the case at all. Our belief statement is: Jesus Christ is perfectly divine and perfectly human and these two natures are united together without confusion.”

(Chalcedonian Churches that agreed to accept the stipulations of the Council of Chalcedon were mainly the Catholic, Greek and Russian Orthodox churches.)

After Islamic rule took over Egypt in 647 A.D., Christians and Jews at first were protected, but they had to pay a tax to the Muslim government. Most Coptic Christians converted to Islam, and within 200 years, Coptic Christians were a minority.

A century or so later, Arabic replaced Coptic as Egypt’s primary language.

In modern times, church-state relations in Egypt have been a roller-coaster ride.

Today, Coptic relations with Egypt’s government and President Abdel-Fattah el-Sissi appear to be friendly and stable. Ongoing sporadic violence on the street however continues.

Coptic Pope Tawadros and the Egyptian President have an alliance: The Copts support Sissi, and Sissi protects the Christians.

Sissi has since outlawed a common foe to both parties — the radical Muslim Brotherhood that has been Egypt’s largest opposition movement and a standard-bearer for radical Islamist groups.

At some levels, things are getting better:

In 2015, Sissi became the first Egyptian president to attend a Christmas Eve Mass, promising equality to the Copts; and in that same year, the number of Copts in the Parliament increased to 36 out of 596 members.

After Mark returned to Alexandria in 49 A.D. to build his church, pagan idolators in the city resented his efforts to sway the polytheistic Egyptians from worshiping their 2,000 gods.

Like the Jews in Jerusalem with Jesus, they complained to the local Roman authorities, and in 68 A.D., Roman soldiers placed a rope around Mark’s neck and dragged him through the streets of Alexandria until he was dead.

His relics were kept in Egypt for a while and then were taken to Italy, where they are venerated to this day at St. Mark’s Basilica in Venice.

The early Coptics left another important legacy in Christendom — monasticism.

Founded in the late 3rd century by St. Anthony, monasticism grew into a major institution in the Christian world. Within a century, monasteries and caves everywhere were filled with men living solitary lives of devotion to God.

Coptic Christians have spread throughout the world, with significant populations in England, France, Austria, Germany, the Netherlands, Brazil, Australia, Canada, the U.S., Egypt, Libya, Sudan, and several other countries in the Middle East, Africa and Asia — possibly totaling as many as 20 million believers worldwide.

St. Mark the Evangelist — would be pleased.

"And they said we have killed the Messiah Isa son of Maryam, the Messenger of God. They did not kill him, nor did they crucify him, though it was made to appear like that to them; those that disagreed about him are full of doubt, with no knowledge to follow, only supposition: they certainly did not kill him. On the contrary, God raised him unto himself. God is almighty and wise."

“In the 300 years from the crucifixion of Christ to the conversion of Emperor Constantine, polytheistic Roman emperors initiated no more than four general persecutions of Christians. Local administrators and governors incited some anti-Christian violence of their own. Still, if we combine all the victims of all these persecutions, it turns out that in these three centuries, the polytheistic Romans killed no more than a few thousand Christians.”

Nero didn’t “fiddle while Rome burned” in 64 A.D. Fiddles didn’t even exist at that time, but he did play the lyre and composed his own music. Also, he was 35 miles away when the city caught fire, and let his palace be used as a shelter. What is true however, was that he falsely blamed the Christians, arresting, torturing and executing hundreds of them.

A 1,600-year-old mosaic of Saint Mark was stolen from a church in Cyprus following the Turkish invasion in 1974, but after a three-year hunt, a Dutch art detective named Arthur Brand found it in the home of a British family living in Monaco. They had inherited it from a family member who bought it, not knowing it was stolen. It was voluntarily returned to the church.

Read up on the Coptic Church, then take this 10-question Trivia Quiz:

Who says, “History is boring?”

Beheading by ISIS of 21 kidnapped Coptic Christians in Libya near Tripoli, 20 from Egypt, one from Ghana, because they refused to renounce their faith (2014).

Mosaic in Coptic Orthodox Cathedral in Cairo, Egypt, dedicated to St. Mark, depicting his martyrdom by being dragged to death through the streets of Cairo by Roman soldiers in 68 A.D. because of his witness for Christ. 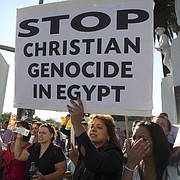 Egyptian Coptic Christians have long been in danger of persecution that includes violence, burning of their churches and martyrdom.

Coptic Christians, frequent targets of religious tensions in Egypt and elsewhere since ancient times, are about 10 percent of Egypt’s population of 100 million (estimate reports vary). 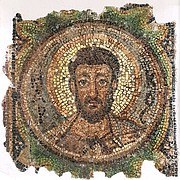 Modern rendition of ancient Egyptian gods worshipped at the time the Coptic Church was founded by Mark the Evangelist c.40s to 60s A.D.