HISTORY CORNER: The cultural roots of dragons go back to ancient times

WIKIMEDIA COMMONS Tablet containing a fragment of the Epic of Gilgamesh.

WIKIMEDIA COMMONS The Mayan “dragon” Quetzalcoatl or “Kukulkan,” said to bring welcome rain to the living and death to evil people by devouring them, was worshipped since before the Spaniards arrived in North America.

WIKIMEDIA COMMONS Mayan dragon Kukulkan at the base of the west face of the northern stairway of El Castillo, Chichen Itza, Mexico.

99IMAGES.COM Tattoo of an evil dragon.

DUCKDUCKGO.COM Gargoyle serving as a rainspout on the National Cathedral in Washington, D.C., to direct rain water away from the structure.

WIKIMEDIA COMMONS Dragons have kept up with modern times and appear in virtually every medium of communications, such as this dragon artwork by David Dumaret of Smaug, the main antagonist in J. R. R. Tolkien’s 1937 novel “The Hobbit.”

Since ancient times, dragons have been part of the folklore of cultures around the world. In Europe, dragons were traditionally fierce fire-breathing looking creatures representing evil, but in Asia they are considered benevolent symbols of wisdom, longevity, sexuality, fertility, procreation, regeneration. water and the heavens.

Each culture has its own interpretation.

What’s the difference between Dragons and Demons?

A dragon is a legendary serpentine creature, described in Western mythology as “a gigantic beast, typically reptilian with leathery bat-like wings, lion-like claws, scaly skin and a serpent-like body, often a monster with fiery breath.”

A Demon is an evil spirit, fallen angel or Satanic divinity or a false god.

With some dragons being evil, the two can be linked.

The full story of dragons is a seemingly endless list of creatures, names, stories, symbols, origins, characteristics, activities, roles in real life, mythology, astrology, art — and so on.

Also, there’s confusion identifying the many mystical creatures as to whether or not they are dragons, gods, monsters, evil or benevolent spirits, angels, giants — and are any of them real?

To sort it all out would take volumes.

Whatever they are, they have certainly captured the public imagination since ancient times and are found everywhere — in legend, mythology, on ancient clay tablets, bas-relief sculptures, artworks, historical literature, sacred books including the Bible — mentioned 35 times (13 of them in Revelation to describe Satan), fiction, movies, festivals, tattoos, games and in the imagination.

The earliest dragon mentioned in recorded history is probably the stylized C-shaped creature carved in jade that was found in eastern Inner Mongolia. It was an art relic from the Hongshan culture, which thrived between 4500 and 3000 B.C., described as having “the horns of a stag, the forehead of a camel, the eyes of a demon, the neck of a snake, the belly of a sea-monster, the scales of a carp, the claws of an eagle, the pads of a tiger, and the ears of an ox.”

In China since those times, the dragon has been an important symbol of good fortune, prosperity, abundance, consistent success, high achievement energy and control over rainfall, floods and hurricanes.

The Chinese still regard the dragon as an important symbol “for valiance, heroism, boldness, self-confidence, power, excellence, perseverance, nobility, vitality and happiness,” as well as bringing physical and spiritual well-being and strength.

The Chinese call themselves the descendants of the dragon, and past emperors were seen as the reincarnation of dragons.

The Dragon King is deified as a god, called the Dragon God, and is invited into temples and worshiped by believers. He’s the supreme ruler of the seas and controls water and weather.

Koreans consider the dragon friendly and like their neighbors have to do with water and agriculture.

Dragons have had a role in Christianity at least since the Middle Ages and adopted as a symbol by several orders of Christian knights who pledged to defend Christianity and served in the Crusades.

The legendary St. George who slew the dragon was one of the knights; the story representing the battle between good and evil — Christianity versus Satan. It was the Christians who first linked dragons with the Devil.

Native American folklore mentions a number of supernatural creatures that might be labeled as dragons but scholarship is scant as to their origins.

One of the well-known stories is about the Piasa Bird, part of the Illini Indians,

Father Jacques Marquette, a French missionary, and Louis Jolliet, a fur-trader and cartographer, encountered the legend in 1675 during an expedition searching the middle Mississippi River region for a passage to the Pacific.

Marquette described a pictograph of the Piasa Bird they’d discovered on some rocks that were “two painted monsters which at first made us afraid, and upon which the boldest savages dare not long rest their eyes.

“They are as large as a calf; they have horns on their heads like those of a deer, a horrible look, red eyes, a beard like a tiger’s, a face somewhat like a man’s, a body covered with scales, and so long a tail that it winds all around the body, passing above the head and going back between the legs, ending in a fish’s tail.”

U.S. and Canadian native folklore both liked to feature the dragon as a Horned Snake — much like the ancient Mesoamerican snake-like dragons that were cultural symbols in Central America long before the Americans and Canadians arrived.

Ancient Aztec and Mayan ruins and preserved indigenous monuments commonly depict their cultural Feathered Serpent “dragon” that the Aztecs called Quetzalcoatl — ”Kukulkan” among the Yucatec Maya. The snakelike creature was considered benevolent that supposedly created the Earth and everything on Earth.

Prior to the days of the Spanish Conquistadores, Quetzalcoatl was worshiped by the Yucatec Maya people of the Yucatán Peninsula in southeastern Mexico.

Quetzalcoatl was also believed to control the weather and the rain, like in Asian cultures, but also devoured evil people.

One story says, “Kukulkan also has the power to cause earthquakes. These tremors are not meant to be destructive…(but) to prove that he is still alive. In addition to his clearly stated powers…over knowledge itself, as some sources claim that Kukulkan was the god who gave humans both laws and writing.”

The earliest record of dragons may have been the discovery of dinosaur fossils in Sichuan Province in China being mislabeled as remains of dragons by 4th century Chinese historian Chang Qu.

Large Nile crocodiles that are capable of lumbering upright on their hind legs might also be an early inspiration for dragons, while ancient Australian Aborigine folklore points to the Goanna lizard with its razor-sharp teeth and claws.

Leviathans mentioned in the Bible could be whales.

In his book “An Instinct for Dragons,” anthropologist David E. Jones interestingly theorizes that people believe in dragons because of an evolutionary developed fear of predators — that fear eventually being absorbed into folklore creating the myth of the dragon.

A sidebar on the Dragons story are gargoyles.

There are several theories on what they’re meant represent: The ugly ones are meant to protect a church from evil, and the scary ones to frighten people into repenting by entering the church to pray and vow to change their lives.

An interesting article in Daily Art Magazine says legend claims the first gargoyles were created during the Middle Ages in the French pagan city of Rouen (where Joan of Arc was executed), where “locals had to give in to the dragon’s demands for human flesh to eat, until a priest arrived…(and) offered to defeat the dragon if the people of Rouen would convert to Christianity in exchange.

“Sure enough, the priest was able to tame the dragon with his Christian faith, and the townspeople duly converted to Christianity.

“They burned the troublesome dragon and stuck his charred corpse on the outside of their new church to show the victory of Christianity over evil.”

Architecturally, many Gargoyles also have the practical job of draining rain water away from the buildings they decorate, serving as rainspouts — symbolically showing Christ’s triumph over Satan.

Hollywood and game makers have taken advantage of popular obsession with dragons, demons and weird creatures. Especially the kids. They all know about “Harry Potter,” “Lord of the Rings,” “Dungeons & Dragons,” “Game of Thrones” and so on.

“George R.R. Martin and HBO didn’t exactly invent the dragon;” writes Victoria McNally on MTV. “They’re just the latest storytellers to tap into our long-held cultural obsession with big flying lizards who set cities on fire with their rad monster breath, and the fact that they’ve managed to make these wyrms popular again is almost too much for our inner 12-year-old fantasy nerds to take.”

Maybe all of this is a good thing. Why not entertain the mind with fanciful creatures and characters that we inherited from our forefathers and the new ones we continue to create in modern times?

Correction to the May 24 History Corner: The front-page photo came from a website that appeared to present it as being in Alaska. The photo was actually an image from Glacier National Park in Montana.

“There are three main systems of belief in China: Daoism (sometimes written Taoism), Buddhism and Confucianism. Chinese people did not adhere strictly to one religion. They carried out the religious observance most appropriate to the occasion, finding that the three religions complemented rather than contradicted each other. Many objects, whatever religion they are ascribed to, share the same symbolic motifs, and Buddhist and Daoist temples were similar in many respects. This is typical of the inter-relatedness of the different forms of Chinese worship.”

“The Dragon is the fifth of all zodiac animals. According to one myth, the Jade Emperor said the order would be decided by the order in which they arrived to his party. Everyone expected the powerful Dragon to arrive early on. However, he came after Rat, Ox, Tiger and Rabbit. When asked why he was so late, Dragon said that on the way, he saw a village suffering from drought. He had to stop and create rain for them. The Jade Emperor was happy when he heard of this noble deed and gave him the fifth position.”

“None of the animals is so wise as the dragon. His blessing power is not a false one. He can be smaller than small, bigger than big, higher than high, and lower than low.” 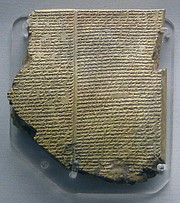 WIKIMEDIA COMMONS Tablet containing a fragment of the Epic of Gilgamesh. 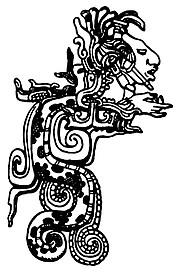 WIKIMEDIA COMMONS The Mayan “dragon” Quetzalcoatl or “Kukulkan,” said to bring welcome rain to the living and death to evil people by devouring them, was worshipped since before the Spaniards arrived in North America.

WIKIMEDIA COMMONS Mayan dragon Kukulkan at the base of the west face of the northern stairway of El Castillo, Chichen Itza, Mexico. 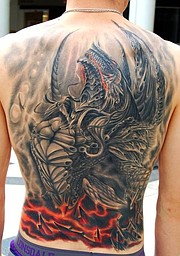 99IMAGES.COM Tattoo of an evil dragon. 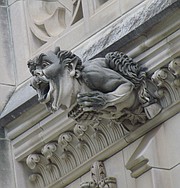 DUCKDUCKGO.COM Gargoyle serving as a rainspout on the National Cathedral in Washington, D.C., to direct rain water away from the structure. 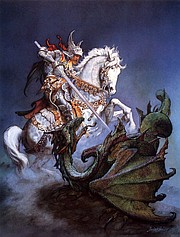 WIKIMEDIA COMMONS Dragons have kept up with modern times and appear in virtually every medium of communications, such as this dragon artwork by David Dumaret of Smaug, the main antagonist in J. R. R. Tolkien’s 1937 novel “The Hobbit.”