Painting by English-born American artist Edward Moran (1829-1901) of deliberate burning of frigate USS Philadelphia captured by Tripolitans after running aground in Tripoli harbor during Barbary Wars, the destruction made by Stephen Decatur and 60 men who escaped in ketch Intrepid shown in foreground.

USMC artist Charles Waterhouse (1924-2013) painting of U.S. Marines led by Lieutenant Presley N. O’Bannon attacking Barbary fortress of Durna in 1805 to rescue kidnapped crew of USS Philadelphia, after marching across 600 miles of Libyan desert to “shores of Tripoli” in the First Barbara War.

Dey of Algiers who demanded and received tribute payments from the U.S. in exchange for not hijacking American shipping (1817).

Thomas Jefferson had barely been inaugurated as president before having to deal with a major thorn in the side of the fledgling United States — attacks on American shipping by Muslim pirates in the Mediterranean, so he sent Stephen Decatur with a small fleet of warships to stop them.

Jefferson already knew a great deal about Barbary pirates, from his days as an American diplomat in Paris.

What followed was the First Barbary War — America’s first overseas war against a foreign enemy.

Piracy on the high seas has been around since the 13th century B.C., according to ancient Egyptian chronicles, writing about raids by the “Sea Peoples” in the shipping lanes of the eastern Mediterranean.

Then in the days of Julius Caesar, even the mighty Romans were plagued by pirates, with the lucrative slave trade fueling much of it.

According to early Roman historian Lucius Cassius Dio, pirates were more difficult to catch or break up than bandits. The pirates raided Mediterranean coastal fields and towns, causing food shortages in Rome.

Finally, Caesar had enough and sent ally (and later rival) Gnaeus Pompeius Magnus “Pompey the Great” to help get rid of them.

Pompey captured 71 pirate ships and 306 more that were surrendered. He also seized 120 towns and fortresses, and killing about 10,000 pirates. Mercifully, he relocated another 20,000 pirates to sparsely populated parts of the empire to help develop those areas.

That didn’t end the slave trade however.

After Pompey’s victory over the pirates, Rome still needed slaves, and the pirates who weren’t caught were central agents to provide them.

Even Pompey’s own son, Sextus became a pirate and commanded a pirate fleet.

Europeans soon got into the act of piracy that continues to this day. Many countries commissioned privateers to plunder shipping on behalf of the government. Queen Elizabeth I, for example, authorized Sir Francis Drake to attack Spanish ships.

Barbary piracy emerged with the rise of the Ottoman Empire about A.D. 1300.

The Barbary pirates, sometimes called Barbary or Ottoman corsairs, were Muslim pirates and privateers who operated from North Africa, mostly from Salé, Rabat, Algiers, Tunis and Tripoli — seaports on the Mediterranean “Barbary Coast.”

During colonial times, American merchant ships had the protection of the Royal Navy, but that ended after Independence. The corsairs agreed to spare English ships for payment of an annual bribe — usually in gold, jewels, arms and supplies. Other European countries did the same.

After becoming independent, the United States had no naval warships to protect its merchant fleet and little money to build them.

Aware of that weakness, Barbary pirates from Morocco, Tripoli, Algiers and Tunis pounced on American ships sailing in the Mediterranean throughout the 1780s, stealing the cargo and holding the crew captive for ransom or slavery.

America wasn’t ready for war, so the ransom was paid — sanctioned by presidents Washington and Adams.

It was cheaper to pay than fight.

During that time, Thomas Jefferson served as U.S. Ambassador to France and was against paying tribute.

Then Tripoli declared war and chopped down the flagstaff in front of the American Consulate.

Without a formal declaration of war, Congress authorized Jefferson to send four naval vessels and Marines to the Mediterranean to defend American shipping interests and rescue captive crewmembers.

He was further authorized to instruct his commanders to do whatever is necessary to accomplish the mission.

Sweden joined the effort, and Malta helped with supplies.

Hostilities began on Aug. 1, 1801 when the USS Enterprise schooner armed with 12 six-pounder cannons and 80 men commanded by Lieutenant Andrew Sterett engaged the Tripolitan corsair Tripoli with 14 six-pounders and 80 men.

The Americans won easily and had no casualties, while the Tripolitans suffered 50.

They cut down the ship’s masts and let it go. The crippled pirate ship limped back to Tripoli, where the Dey (ruler) was so angry at the captain, he paraded him through the streets tied backward on a donkey.

Then he was given 500 whacks on the soles of his feet.

The Enterprise sailed on for Malta for new supplies before returning to blockade duty and attacking Barbary pirate ships.

In October 1803, the 16-gun USS Philadelphia ran aground on an uncharted reef near Tripoli. All efforts to refloat the ship failed. The Tripolitans then took over the ship and refloated it while holding the American crew hostage.

To stop them using the Philadelphia as a pirate ship, Captain Stephen Decatur and a small detachment of Marines sailed a captured local vessel into Tripoli harbor in the dark of night, pretending to be in distress.

Sideling up to the Philadelphia, they set it ablaze.

Britain’s Lord Nelson called it, “the most bold and daring act of the age.”

For 19 months, the 315 officers and crew from the Philadelphia captured by Jusuf Karamanli, ruling pasha of Tripoli, languished in a fortress overlooking the harbor. The food was poor and they had little clothing, but the Danish consul did what he could to help them.

Their captivity ended in 1805 after the Battle of Durna.

Then they led them on a torturous 521-mile trek across the Libyan desert to make a surprise attack on the city of Derna, a pirate haven seaport on “the shores of Tripoli.”

Their mission was to oust Yusuf Karamanli, the ruling pasha of Tripoli who had deposed his brother Hamet who was sympathetic to the U.S.

With support by three U.S. Navy ships bombarding Durna with their big guns, the Americans won a decisive victory in 16 days, with few casualties.

Not wanting another bitter defeat, Yusuf arranged a peace treaty with U.S. Consul Tobias Lear, ending the conflict, and releasing the captured crew from the Philadelphia.

The U.S. Senate ratified the treaty a year later.

Eaton and O’Bannon returned to the United States as heroes.

Hamet Karamanli didn’t get the throne back and returned to exile in Egypt.

The peace treaty was short-lived. Soon the Barbary pirates went back to preying on merchant ships — triggering the Second Barbary War.

In the years between the two Barbary wars, hostility between the U.S. and Britain was brewing that would erupt in the War of 1812. Britain was battling the French under Napoleon, and would seize any American ships trading with France.

They also forced captured American crewmembers to serve in the Royal Navy — impressment.

During that time, the British encouraged the Barbary pirates to attack American merchant ships.

When the 1812 war ended in 1815 with the Treaty of Ghent, the U.S. returned to dealing with the Barbary pirates.

Congress then authorized deployment of a 10-ship naval squadron commanded by Commodore Stephen Decatur to go after the Algerian pirates.

In the Mediterranean, he captured several pirate ships, then confronted the Dey of Algiers with tough talk about stopping the piracy and demanded compensation for losses — threatening destruction if he didn’t comply.

The Dey capitulated, released 10 captives and agreed to full payment for injuries to Americans. In return, Decatur gave back two captured ships and about 500 of the Dey’s subjects.

The treaty guaranteed no further tribute demands and granted safe shipping rights in the Mediterranean.

Decatur then signed similar agreements with others Barbary countries.

With the signing of the treaty, all the crew and officers of the USS Philadelphia held in captivity for 19 months were set free.

He died on March 24, 1820, from a wound sustained two days earlier in a dual with Commodore James Baron. President James Monroe and 10,000 citizens attended his funeral.

America’s Navy hero and “Conqueror of the Barbary Pirates” was only 41.

The Barbary States, although they did not capture anymore U.S. ships, the Barbary corsairs resumed raids in the Mediterranean, and despite punitive British bombardments didn’t end their piracy until the French conquest of Algeria in 1830.

The Barbary War victories were a bold start for a young America.

Among the famous prisoners held captive by the Barbara pirates and later ransomed were St. Vincent de Paul and Miguel de Cervantes, author of "Don Quixote."

In March 1786, Thomas Jefferson and John Adams went to London to negotiate with Tripoli's envoy, Ambassador Sidi Haji Abdurrahman to end the piracy. The Americans were told that “the Koran says that all nations which had not acknowledged the Prophet were sinners, whom it was the right and duty of the faithful to plunder and enslave.”

A first for Old Glory…

After winning the battle at Derna, Marine Lieutenant Edward O’Bannon raised the 15-star and 15-stripe American flag (later made famous in the War of 1812 as the "Star-Spangled Banner"), over the fortress. It was the first time the Stars-and-Stripes had ever flown over a fortification on that side of the Atlantic.

On the long trek from Egypt, Eaton and O’Bannon’s mercenaries started talking mutiny when food rations ran low. Tension developed between the Orthodox-Christian Greeks and the 200 to 300 Muslim Arabs and Turks. Several Arab camel drivers did run away, and at one point, some Arabs tried to raid the supply wagon but were stopped by the Marines and a few Greek artillerymen.

At age 25, Stephen Decatur became the youngest man to reach the rank of captain in U.S. Naval history. He served in three major wars and made the U.S. Navy a superpower with his exceptional leadership qualities. Five U.S. Navy ships have been named after him. 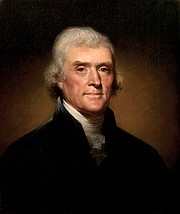 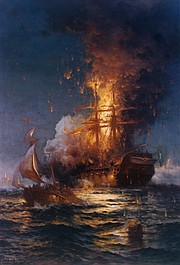 Painting by English-born American artist Edward Moran (1829-1901) of deliberate burning of frigate USS Philadelphia captured by Tripolitans after running aground in Tripoli harbor during Barbary Wars, the destruction made by Stephen Decatur and 60 men who escaped in ketch Intrepid shown in foreground. 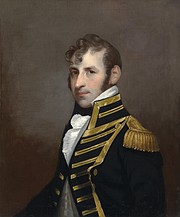 USMC artist Charles Waterhouse (1924-2013) painting of U.S. Marines led by Lieutenant Presley N. O’Bannon attacking Barbary fortress of Durna in 1805 to rescue kidnapped crew of USS Philadelphia, after marching across 600 miles of Libyan desert to “shores of Tripoli” in the First Barbara War. 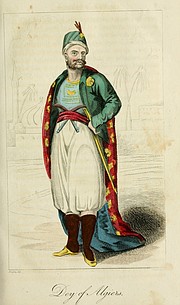 Dey of Algiers who demanded and received tribute payments from the U.S. in exchange for not hijacking American shipping (1817). 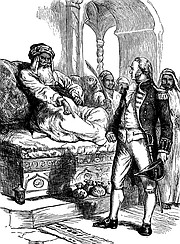 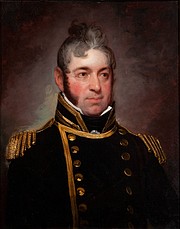