TOUREIFFEL.PARIS View from the Eiffel Tower of the Seine River and Palais de Chaillot, a building in the Trocadéro area of Paris, site of the International Exposition of 1937.

WIKIMEDIA COMMONS The Colossus of Rhodes, one of the Seven Wonders of the Ancient World, constructed in 280 B.C. was about as tall as the Statue of Liberty and was destroyed by an earthquake in 226 B.C.

GOOGLE IMAGES The Statue of Liberty, a gift to the United States from France, was created by French architect and civil engineer Gustave Eiffel.

WIKIMEDIA COMMONS Painting by Edward Moran of the unveiling of Gustave Eiffel’s Statue of Liberty in New York Harbor on Oct. 28, 1886.

NATIONAL MUSEUM OF AMERICAN HISTORY First Lady Nancy Reagan visiting the Statue of Liberty, engineered by Gustave Eiffel who designed the central pylon and supervised the statue's internal construction until completion in late 1883.

PUBLIC DOMAIN President Grover Cleveland at the dedication of the Statue of Liberty on Oct. 28, 1886.

“There is an attraction, a special charm in the colossal to which ordinary theories of art do not apply,” said Alexandre Gustave Eiffel. “Can one think that because we are engineers, beauty does not preoccupy us or that we do not try to build beautiful, as well as solid and long-lasting structures?”

Eiffel was indeed a genius and big thinker, building two of the modern world’s largest iconic works of art in the 984-foot tall Eiffel Tower in Paris and the Statue of Liberty in New York — about the same size as the Colossus of Rhodes — one of the Seven Wonders of the Ancient World — built in 280 B.C.

The Statue of Liberty, built a few years before the Eiffel Tower was a gift from the people of France to the people of the United States to commemorate a lasting friendship.

It was designed by French sculptor Frédéric Auguste Bartholdi, while its metal framework was built by Gustave Eiffel himself.

Standing 151 feet tall, including the pedestal, the Statue of Liberty is the 49th tallest statue in the world today.

It took 10 years to build and as soon as it was finished and dedicated in 1886, Eiffel began work on the tower in Paris that now bears his name. It was commissioned to be the main exhibit of the upcoming Paris World's Fair of 1889.

Alexandre Gustave Eiffel was born in Dijon Prefecture in northeastern France in 1832. His parents had a successful charcoal and coal business that they sold for enough money to be able to retire. Young Gustave was bored with high school, though in his last two years became fired up with history and literature and graduated.

Engineering colleges were tough to get into in those days, but he was accepted at the prestigious École Centrale des Arts et Manufactures where he studied chemistry.

One of his best works was the Maria Pia Bridge in Portugal completed in 1877 that quickly built his reputation as a brilliant designer and engineer.

In 1990, the bridge was classified by the American Society of Engineering as an International Historic Civil Engineering Landmark, but sadly the next year rail service was ended because there was only one track and there were unacceptable speed restrictions.

Eiffel’s commissions took him to many countries from Peru to Romania, Egypt to South America, and Panama to Vietnam.

His crowning achievements however were the Statue of Liberty and the Eiffel Tower, now among the world’s most famous structures.

None of his works came easily. Apart from expected hassles with corporate powers and bureaucrats, he was constantly dogged by critics of his engineering and artistic designs.

Even the iconic Eiffel Tower had high-level detractors.

“A thick cloud of tar and coal smoke seized the throat, and we were deafened by the din of metal screaming beneath the hammer. Over there they were still working on the bolts: workmen with their iron bludgeons, perched on a ledge just a few centimeters wide, took turns at striking the bolts (these in fact were the rivets).

“One could have taken them for blacksmiths contentedly beating out a rhythm on an anvil in some village forge, except that these smiths were not striking up and down vertically, but horizontally, and as with each blow came a shower of sparks, these black figures, appearing larger than life against the background of the open sky, looked as if they were reaping lightning bolts in the clouds.”

Critics called it a “truly tragic street lamp…a skinny pyramid of iron ladders and the Tower of Babel.”

Even some of the art and literary super-stars of those times such as Guy de Maupassant and Alexandre Dumas the younger joined in the tirade:

“Imagine for a moment a tower of ridiculous vertiginous height dominating Paris — just like a gigantic black factory chimney, its barbarous mass overwhelming and humiliating all our monuments and belittling our works of architecture, which will just disappear before this stupefying folly.”

It must have been galling to the faultfinders to discover that their diatribes were ignored by the public when two million visitors came to see it during the World's Fair of 1889.

Eiffel didn’t take the flack lying down. Defending its design, he fired back: “The curvature of the monument's four outer edges, which is as mathematical calculation dictated it should be…will give a great impression of strength and beauty, for it will reveal to the eyes of the observer the boldness of the design as a whole.

“Likewise. the many empty spaces built into the very elements of construction will clearly display the constant concern not to submit any unnecessary surfaces to the violent action of hurricanes, which could threaten the stability of the edifice.

“Moreover, there is an attraction in the colossal, and a singular delight to which ordinary theories of art are scarcely applicable.”

It would take years for the public to finally accept the Eiffel Tower as a work of art.

The American public was much more charitable toward the Statue of Liberty.

That was not an easy task.

At first, there was little enthusiasm for providing the money until New York World publisher Joseph Pulitzer jumped in.

“The $250,000 that the making of the Statue cost was paid in by the masses of the French people — by the working men, the tradesmen, the shop girls, the artisans, by all — irrespective of class or condition. Let us respond in like manner. Let us not wait for the millionaires to give us this money.

The appeal worked. Donations flooded in — most a dollar or less — and the pedestal was completed.

The robed female figure of the Statue of Liberty was designed by Frédéric Auguste Bartholdi as representing Libertas, the Roman goddess of freedom, and today an enduring icon of the United States — a welcoming beacon of hope for immigrants from foreign lands.

The toughest time in Gustave Eiffel’s life was when he became involved in building the Panama Canal.

On a trip to Egypt, he met former French diplomat Ferdinand De Lesseps who founded the Suez Canal Company to develop the Suez Canal — which he did successfully.

Later, hoping to repeat his success he was appointed president of the Panama Canal Company to build a sea level shortcut across the Panama Isthmus and hired Gustave Eiffel to build 10 locks for the canal.

It was potentially the most lucrative assignment of his career, but failed due to mismanagement by De Lesseps, technical difficulties of operating in the tropics, landslides, malaria, yellow fever and insufficient finances.

In 1889, the French-run project was shut down amid a big scandal as rumors swirled about French politicians and journalists receiving bribes.

It would take President Teddy Roosevelt and the Americans to finish the Panama Canal.

Eiffel was a late-comer to the project but got swept up in the scandal and was indicted for fraud and sentenced to two years in prison and a fine of 2000 francs.

The ruling was overturned on appeal however, but Eiffel’s honor and reputation were badly tarnished.

The genius French engineer retired from business and devoted the rest of his life to writing and research.

Gustave Eiffel died in Paris in 1932 at age 91, leaving behind his world-renown works and treasure trove of information from his experiments in aerodynamics and meteorology.

When President Trump and First Lady Melania dined at the Eiffel Tower with French President Macron and wife Brigitte in 2017, here’s what they ate:

Building the Eiffel Tower that overlooks Paris like a giant Erector Set required:

• 150 workers in the Levallois-Perret factory in Paris

• Between 150 and 300 construction site workers

At first, the Eiffel Tower had no practical use except as a monument to commemorate the 100th anniversary of the French Revolution, but now it is topped with television, radio and other transmission antennas, while the rest serves its seven million annual visitors with two restaurants, several buffets, bar, banquet hall, shops and a fabulous view of Paris. Tickets are up to $18 per adult to go to the top.

About the Statue of Liberty…

Though Frederic-Auguste Bartholdi designed the Statue of Liberty, it was Edouard de Laboulaye’s idea for the statue to celebrate victory in the American Revolution and the abolition of slavery after the Civil War. Laboulaye hoped the statue would also inspire the French to fight against the repressive regime of Napoleon III.

“Give me your tired, your poor…”

At the base of the Statue of Liberty on an engraved bronze plaque is the famous poem by American poet Emma Lazarus that ends with:

"Give me your tired, your poor,

The wretched refuse of your teeming shore.

Send these, the homeless, tempest-tost to me,

I lift my lamp beside the golden door!"

TOUREIFFEL.PARIS View from the Eiffel Tower of the Seine River and Palais de Chaillot, a building in the Trocadéro area of Paris, site of the International Exposition of 1937. 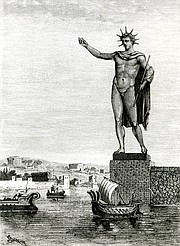 WIKIMEDIA COMMONS The Colossus of Rhodes, one of the Seven Wonders of the Ancient World, constructed in 280 B.C. was about as tall as the Statue of Liberty and was destroyed by an earthquake in 226 B.C. 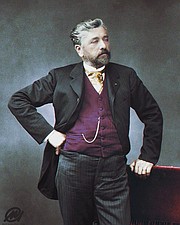 GOOGLE IMAGES The Statue of Liberty, a gift to the United States from France, was created by French architect and civil engineer Gustave Eiffel. 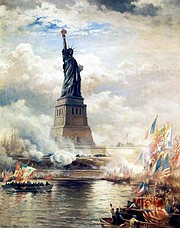 WIKIMEDIA COMMONS Painting by Edward Moran of the unveiling of Gustave Eiffel’s Statue of Liberty in New York Harbor on Oct. 28, 1886.

NATIONAL MUSEUM OF AMERICAN HISTORY First Lady Nancy Reagan visiting the Statue of Liberty, engineered by Gustave Eiffel who designed the central pylon and supervised the statue's internal construction until completion in late 1883. 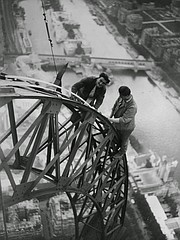 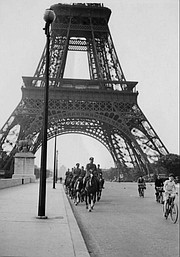 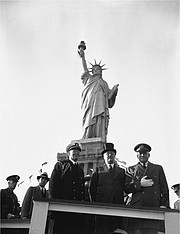 PUBLIC DOMAIN President Grover Cleveland at the dedication of the Statue of Liberty on Oct. 28, 1886.